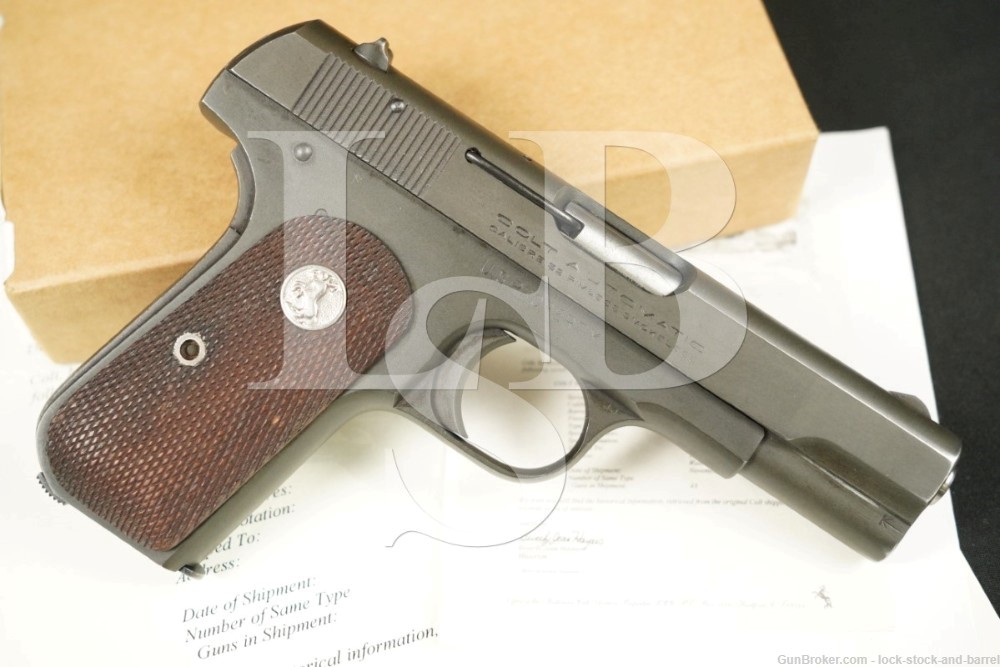 Stock Configuration and Condition: The grips are checkered walnut with silver-colored rampant colt medallions. The grips show minor handling wear with a few light nicks and scuffs. The checkering is well defined. There are no chips or cracks. Overall the grips are in Fine condition.

Finish Originality: We don’t see any signs of refinishing, but the Colt Archive letter indicates that it was shipped with a “Dull Blue” finish. In the absence of the letter, it would be assumed that the finish is original. It is possible that there was an error in the records, but otherwise, the pistol has been quite skillfully refinished.

Overall Condition: This handgun retains about 96% of its metal finish. The balance is mostly in edge-thinning and light operational wear. There are a few scattered minor nicks, scuffs and scratches. There are a few stubborn grease-stains and there is very minor discoloration from oxidation on the rear face of the side and the top-rear of the frame. The screw head is sharp. The markings are clear. Overall, this pistol rates in about Fine condition.

Box, Paperwork, and Accessories: This pistol comes in a two-piece cardboard craft box with hand-written label, Colt Archive letter, and one blued 8 round magazine. The magazine has minor operational wear, intact feed lips and a strong spring. The letter confirms that this pistol shipped November 1, 1946 to Joseph A. Lorch, Colt’s agent in Washington D.C.. The letter confirms that the “U.S. Property” marking is genuine, however it also states that this pistol was an “Overrun on government contract”. I shipped as one of 43 guns of the same type in the shipment.

This example is one that was made for a contract with the United States government, as is evident by its “U.S. PROPERTY” marking, however it was an over-run and was shipped from Colt to their Washington D.C. sales agent, Joseph Lorch. This makes for an interesting example for the collector, as one of these U.S. marked contract-overrun pistols is actually more scarce than one which actually shipped on a Government contract, and much less common than a standard commercial pistol. This pistol is in Fine condition, showing minor handling and light operational wear. This will make a nice addition to a Colt autoloader collection, especially as it comes from the collection of author Kevin Williams, best known for his exceptional work on the topic of General Officers Pistols & Clandestine Organization Pistols of WWII. Please see our photos and good luck!