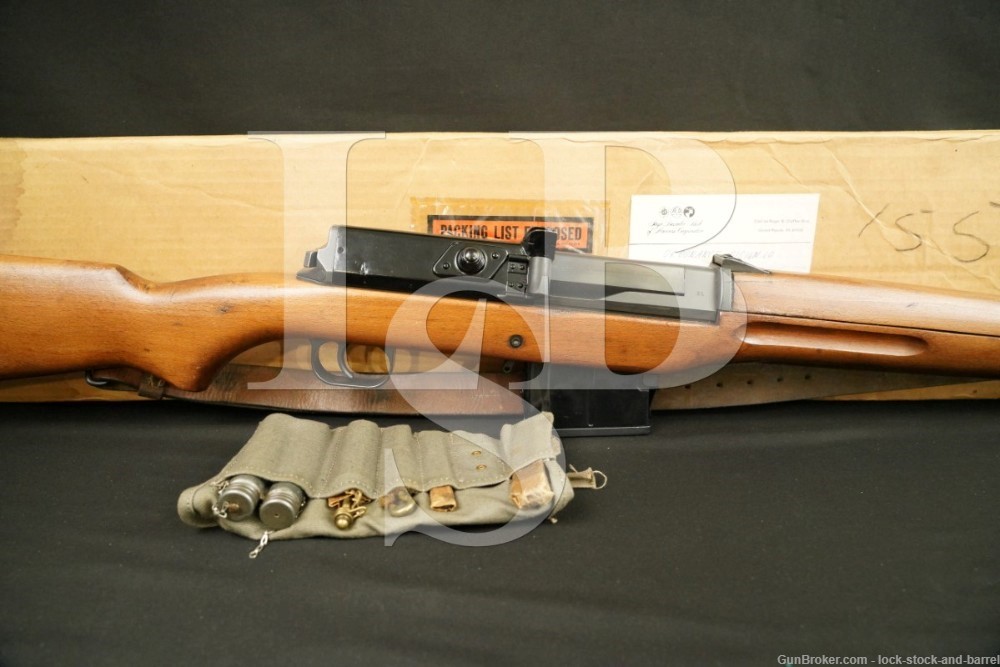 Stock Configuration & Condition: The hardwood stock has a pistol grip, finger grooves, nosecap with a hole for the included cleaning rod, barrel band with sling bar, through bolt, sling loop under the butt, marking disk on the butt, and a metal buttplate. The refinihsed buttplate has dents & some surface erosion showing through the new finish. It shows scrapes & discoloration. The wood shows scattered scrapes and scratches. Most of these marks have been finished over. The finish shows runs near the left through bolt. The LOP measures 13 5/8 inches from the front of the trigger to the back of the buttplate. The stock rates in about Very Good Plus to Fine overall condition as refinished

Bore Condition: The lands are bright, the grooves are semi bright and the rifling is deep. There is no erosion.

Overall Condition: This rifle retains about 95% of its metal finish as refinished. The top cover has been refinished in black. A few scratches and a dent show through the new top cover finish. The metal shows scrapes and scratches; most prominent on the barrel. The barrel also shows light discoloration. The receiver and bolt show light operational wear. The screw heads show use. The markings are deep. Overall, this rifle rates in about Very Good Plus to Fine condition as refinished.

Box, Paperwork & Accessories: The rifle comes with a 10 round magazine. The floorplate has been refinished. It shows some light scrapes and is in about Fine condition.
The rifle also comes with a Swedish sling and a cleaning kit. The rifle comes in its original cardboard shipping box.

Our Assessment: This Swedish Ljungman AG-42B was made by Carl Gustafs back in 1943. It was Arsenal Refurbished & upgraded in the early 1950’s. The metal & wood have since been refinished. This Swedish semi auto looks great, has deep markings and has a strong bright bore. It will add nicely to your collection and should make you smile out at the range.

The following Swedish Ljungman AG-42B information is from the Forgotten Weapons web page at forgottenweapons.com/rifles/ljungman/. The site also has detailed videos on the rifle:  “The AG-42 (Halvautomatiskt Gevaer 42) Ljungman was Sweden’s first standard issue self-loading rifle…It is a direct gas impingement design, with a gas tube that feeds pressurized gas directly against the bolt carrier…In 1953 the AG42 was upgraded to the AG42B model, which involved a number of small changes. The most distinctive one is the change from serrated patches on the receiver cover to round protrusions, to allow shooters a better grip. In addition, a rubber ejection buffer was added to prevent brass damage, the gas tube was strengthened, the magazine was given a more secure front hook, and a few other minor internal improvements were made. In the early 1950s, Sweden licensed production of a Ljungman variant in Egypt, where it was known as the Hakim. These rifles have a few differences from the Swedish guns, including use of an adjustable gas port and being chambered in 8mm Mauser. Egypt also produced a Ljungman-based carbine in 7.62x39mm, called the Rasheed (or Rashid)”.