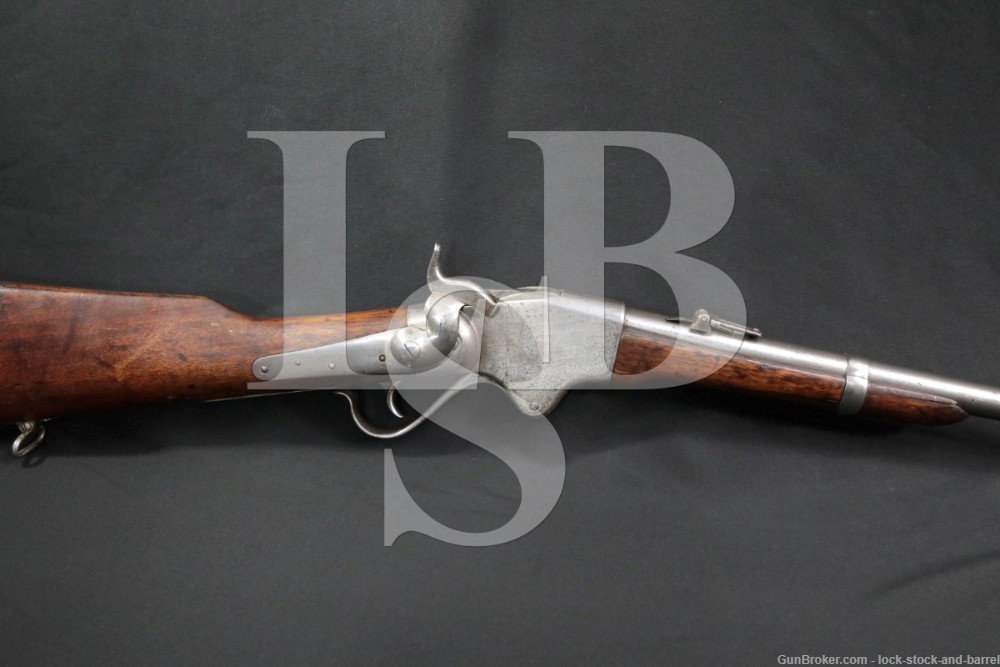 Stock Configuration & Condition/ Grip: The stocks are two-piece wood featuring a forend secured by a screw, a barrel band secured by a spring, a straight wrist, a straight comb and a metal butt-plate with a slot for the tubular magazine. There is a sling-bar on the left side of the wrist. There is a sling-swivel fixed to the belly. The stocks have light-moderate handling marks, compressions, nicks and scuffs. Notably, there is a ding on the upper left portion of the wrist, some light wear at the heel, some moderate wear at the toe and a crack on the front right portion of the forend. The LOP is 13” from the trigger to the rear end of the butt-plate. The butt-plate is in the white and has light-moderate handling marks. Overall, the stocks are in Very Good-Fine condition for Antiques.

Finish Originality: The finish appears to have mostly worn off during a heavy cleaning and the gun is now mostly in the white.

Bore Condition: The bore is semi-bright with sharp rifling. There is scattered erosion in the bore.

Overall Condition: The carbine retains about 2% of its metal finish. The remaining blue finish is concentrated on the barrel, concealed under the forend. The case coloring has almost entirely worn off. The metal parts of the carbine are coated in scattered patches of light surface oxidation, but it is now mostly in the white. There are scattered light handling marks, nicks and scuffs. Notably, there is oxidation around the muzzle and there is an oil stain on the left side of the barrel ahead of the forend. The marking at the top of the receiver and several proofs have faded. The screw-heads have tool-marks but they remain serviceable. Overall, the carbine is in Very Good condition for an Antique.

Mechanics: The action functions correctly. This M1865 was made before the Stabler Cut-Off was installed on Spencers. We have not fired this carbine. As with all previously owned firearms, a thorough cleaning may be necessary to meet your maintenance standards.

This Spencer Carbine is a Model 1865 which is serial number 758 and was manufactured between 1865-1866. It has no provision for a Stabler Cut-Off, typical on early production M1865 Spencer Carbines (about half of the total produced were equipped with the feature) and the Spencer appears to be in its original configuration. The gun is chambered for .56-50 Spencer rimfire cartridges. This is a beautifully crafted rifle that was manufactured just as the Civil War ended, most of the Model 1865 carbines supplied to the US Government would remain in storage until they were auctioned off in the 1870s. It should be noted that a number were also sold to foreign governments. This is a beautifully preserved Model 1865 Spencer Carbine that you will not want to miss out on!