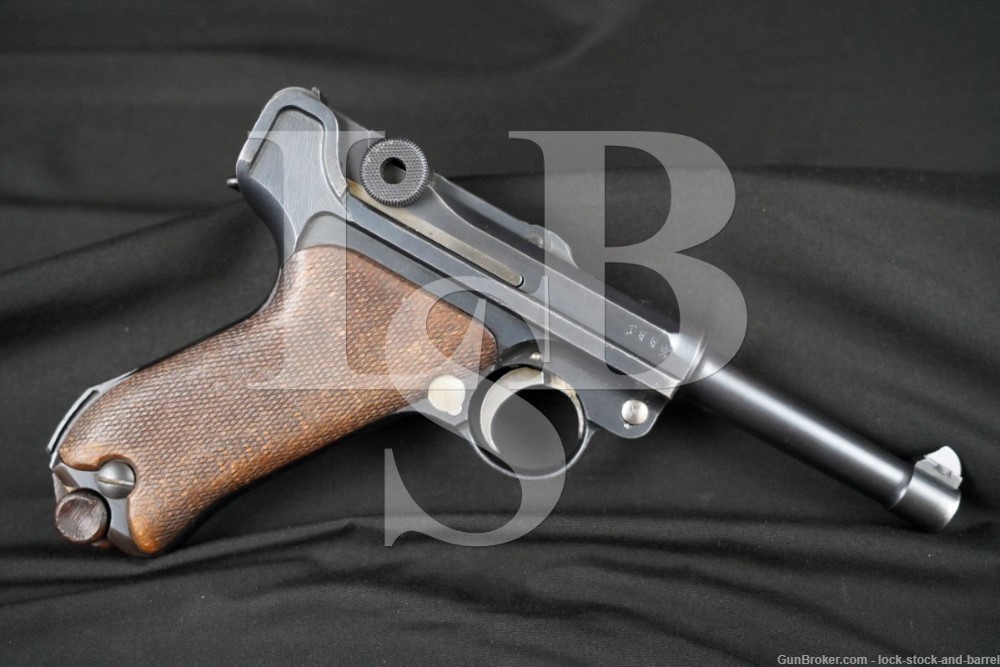 Bore Condition: The bore is mostly bright with sharp rifling. There is erosion concentrated in the grooves.

Overall Condition: The pistol retains about 75% of its metal finish. There are light handling marks, nicks and scuffs. Notably, the finish has worn off the leading edges, there is light wear around the muzzle and moderate wear situated on the rear end of the rear toggle link. The markings remain clear. The screwheads have tool-marks but they remain serviceable. Overall, the pistol is in Very Good condition.

Box Paperwork and Accessories: The pistol comes with a single 8-round magazine. The magazine has moderate wear, notably it is coated in light surface oxidation. Overall, the magazine is in Good condition.

This particular Luger was manufactured in 1917 as the First World War (WWI) raged into its third year. Imperial Germany was stuck in a bitter stalemate on the Western Front (fighting against Britain and France), but on the Eastern Front (fighting against Russia) it was nearing a decisive victory. It appeared that Germany would be able to settle the war with Moscow and then divert its forces West for a final push against the worn out Western powers (a scenario that ultimately materialized early in 1918). Yet the Western powers received a needed respite in April when the United States declared war on Germany which provided the Western Allies with a fresh manpower pool that Germany had no real hope of overcoming. Numerous major battles were fought that year, with Russia launching the June Offensive which resulted in a decisive German victory and the Battle of Cambrai which saw British forces unleash the first significant armored offensive in history although it did little to change the situation on the ground. It would not be until the following year when the war ended in Germany’s ultimate defeat.

The pistol we have here has been refinished and has some parts which are not original to the gun. The trigger side plate is not original, the right grip panel is not original although we are unsure about the left one, the magazine is for a different pistol and the gun has been refinished. Despite this it remains an aesthetically impressive pistol that is both ergonomic and mechanically sound. It is rare to find a WWI-era Luger in its original configuration, and this one is still well preserved. It should prove a worthy addition to any collection and appeal to collector’s of WWI era historical items. Good luck on your bid!