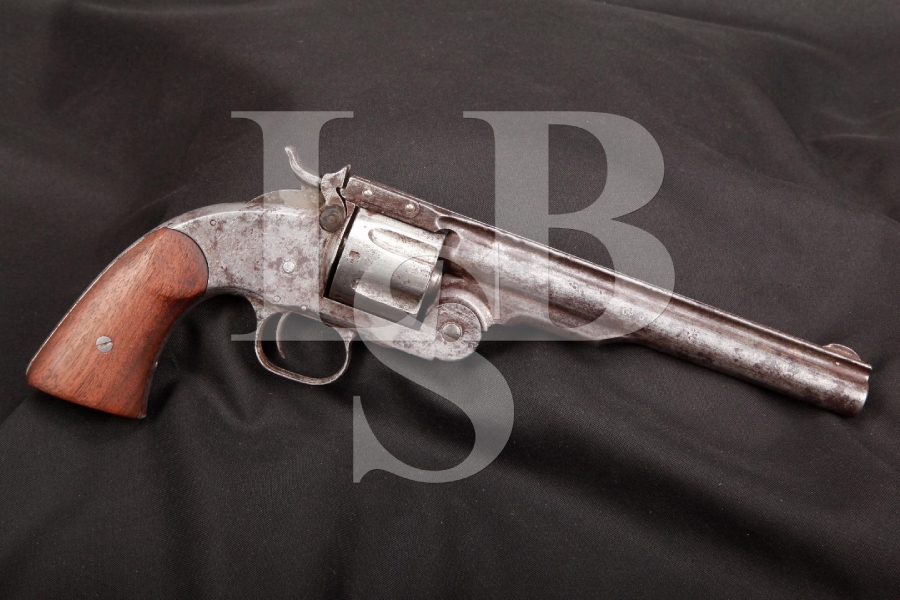 LSB#: 130612CB03
Make: Smith & Wesson
Model: Number 3, First Model Schofield
Serial Number: 2013
Year of Manufacture: 1875
Caliber: .45 Schofield
Action Type: Single Action, Top-Break Revolver
Markings: The left side of the barrel lug is marked with the faintly visible remains of patent markings”& 24th 65. July 11th 65. Aug 24th 69. July 25th 71”. On the right side of barrel lug is barely visible “..HOFIELD’S Pat. Apr. 22d 1873”. The pistol butt is marked “US” on the toe and “2013” in the middle. The rear face of the cylinder is marked “660” with what appears as a “B” beneath. There is an “L” on the top of the frame bottom strap. There is a “B” on the underside of the barrel.
Barrel Length: 7”
Sights / Optics: The front sight is a rounded blade pinned to the barrel. The rear sight is a “U” shaped notch with a small “V” notch at the bottom located on the latch mechanism.
Stock Configuration & Condition: The grips are not original and have no visible serial number inside. They are well-fitted to the gun, but are without finish, checkering or escutcheons. They have many fine scratches, but no chips, cracks or scratches. They are held in place with a nonstandard machine screw. The grips rate in Fair condition.
Type of Finish: Wire brushed bare steel. No traces of original finish remaining.
Finish Originality: None
Bore Condition: The bore is rough and pitted. The rifling is visible, poorly defined and dark. There is heavy erosion in the bore.
Overall Condition: This handgun retains about 0% of its metal finish. Someone has wire brushed the entire gun, removing finish and almost all markings. The screw heads are brushed and in the case of the barrel latch pivot screw, likely a replacement. The markings are very faint, almost illegible and in places obscured or removed. Overall, this handgun rates in about Poor condition.
Mechanics: The action functions poorly or not at all. The handgun is out of time and has no bolt stop. The action is loose, damaged or nonfunctional. The top-break action functions in a poor manner and the ejector is nonfunctional, falls out and is missing the internal spring and spring cap. There is no firing pin on the hammer. (We view this as a safety feature . . .) We did not fire this handgun and cannot recommend this gun as a useable firearm. This firearm is for collection purposes only, NOT FOR SHOOTING. These firearms are 150 years old and are designed for black powder cartridges. Even if you locate some black powder .45 Schofield cartridges, DO NOT ATTEMPT TO SHOOT THIS FIREARM!
Box, Paperwork & Accessories: None
Our Assessment: This Smith & Wesson Schofield is a genuine collectable US Army issue revolver. Contrary to myth, they were very popular with soldiers. They were surpassed by other pistols simply because Smith & Wesson did not make many of them. Perhaps it saw action in the Indian Wars and then was placed in reserve status with a state militia unit. These pistols were in action as late as the 1898 Spanish-American War. This particular pistol is suitable for a display on the American West, or as a theme piece. It feels wonderful in the hand and certainly has stories to tell.