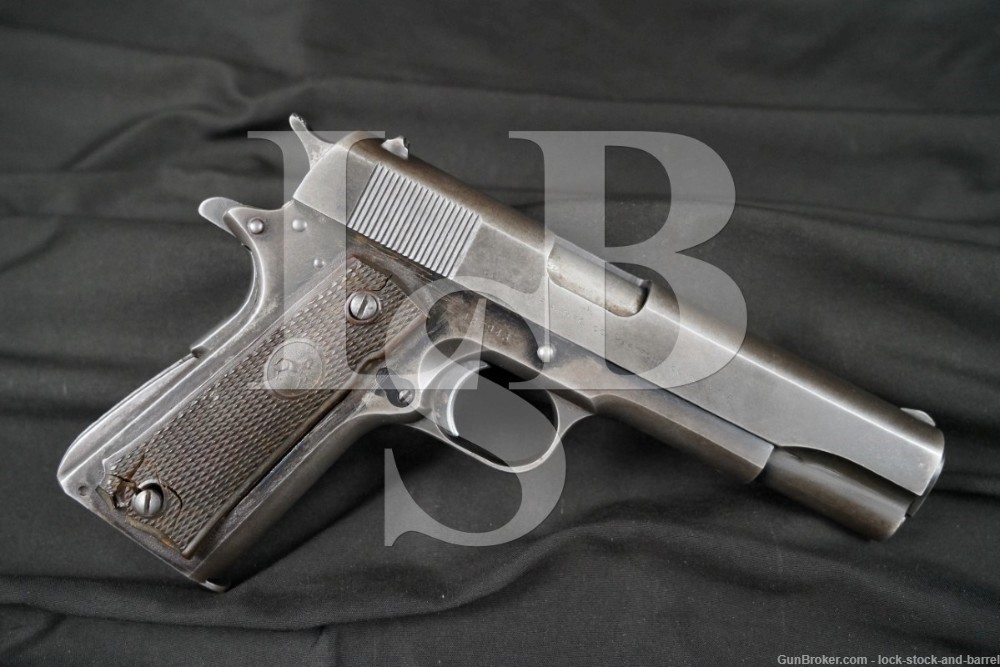 Stock Configuration & Condition: The grips are two-piece checkered brown “Coltwood” plastic panels with reinforcement rings around the screws and reinforcement ribs on the inside. The grips have shrunken considerably, as Coltwood grips do, causing breaks and cracks around the grip screws, warping and discoloration. The checkering is generally well defined where not broken. Overall, the grips are in about Poor condition.

Bore Condition: The bore is mostly bright with sharp rifling. There are infrequent spots of minor erosion in the bore.

Overall Condition: This handgun retains about 65% of its metal finish. The finish is lightly at all edges. There is handling wear in the grip areas. There is other scattered finish wear, most prominent on the right side. There is some scattered minor surface oxidation with some more notable oxidation around the edges of the grips. There are some scratches on the right of the frame, above and in front of the grip panel, with a few other scattered minor marks. The action shows operational wear. The screw heads range from sharp to tool marked with strong slots. The markings are clear. Overall, this pistol is in Good condition and would rate higher but for the shrinkage in the grips.

Mechanics: The action functions correctly. The trigger is crisp. The slide has very little play to the frame. We did not fire this handgun. As with all used firearms, a thorough cleaning may be necessary to meet your maintenance standards.

Box, Paperwork & Accessories: This pistol comes with a single 9-round magazine. The magazine shows light operational wear, has intact feed lips and a strong spring.

Our Assessment: The .38 Super cartridge was first introduced by Colt in 1928 as a higher pressure loading of the .38 ACP. It is capable of driving a 115 gr. bullet past 1400 fps., producing more than 500 ft-lbs of energy. This is not quite up to the .357 Magnum, but was still capable of penetrating body armor and automobile bodies of the time. Today, the cartridge is favored by many top pistol match competitors for its ability to make “Major” power factor in IPSC/USPSA, with a lighter bullet offering less felt recoil than that produced from a .45 ACP round. Colt first introduced the round in its 1911A1 frame, making it basically the same as the Government Model except for its cartridge. The 1911 pistol had already gained a reputation as a highly reliable pistol during WWI, Colt saw no reason not to capitalize on that reputation with a new caliber offering. This post-war Super .38 pistol was made in 1956 and is in Good condition. The pistol retains a good bore and strong mechanics, but has honest wear in the metal consistent with use over the last sixty years and the grips have shrunk as Coltwood all too often does.  A new set of grips would go a long way toward improving the appearance of the gun, though the included ones are likely those originally shipped with it. The Super .38 pistols are highly prized by collectors, and this one likely will be no different. If it gets past the collectors, this Super .38 should still make for a fun shooter. Please see our photos and good luck!