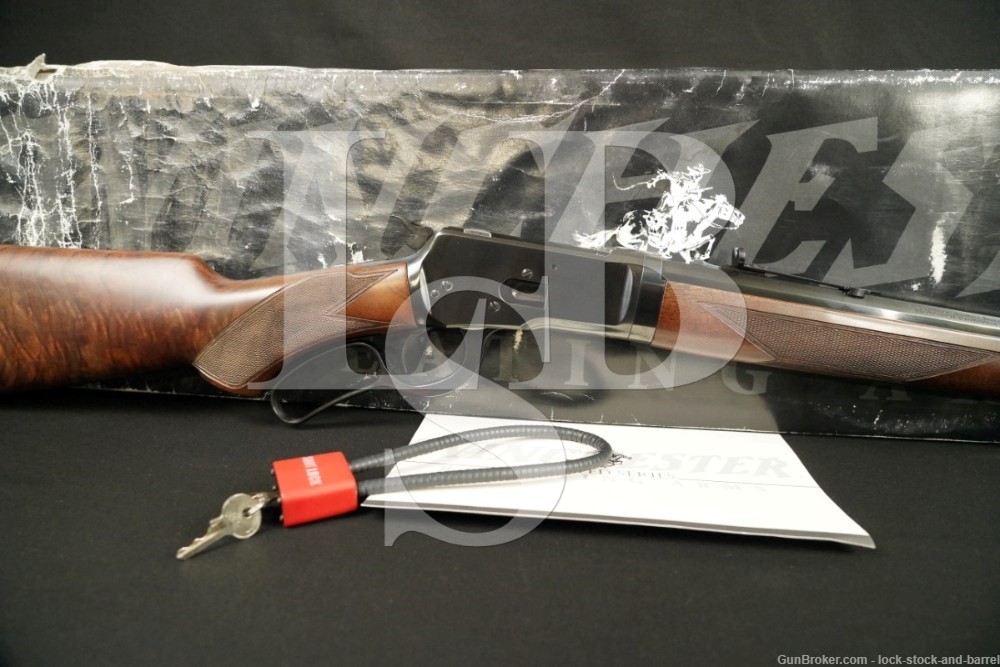 Stock Configuration & Condition: The stocks are 2-piece checkered deluxe walnut with capped forend, semi-pistol grip, straight comb, and a steel crescent buttplate. There are no noteworthy imperfections and the checkering is sharp. There are no chips or cracks. The LOP measures 12 7/8? from the front of the trigger to the back of the buttplate. The plate has no notable wear or damage. Overall, the stocks are in Excellent condition.

Bore Condition: The bore is bright. The rifling is shallow but visible. There is no erosion.

Overall Condition: This rifle retains about 99% of its metal finish. The metal is clean with no significant imperfections. The action has little-to-no operational wear. The screw heads are sharp. The markings are clear. Overall, this rifle is in Excellent condition.

Mechanics: The action functions correctly. The hammer has a half-cock safety position. There is a tang mounted safety as well. The trigger is crisp. We did not fire this rifle. As with all used firearms, a thorough cleaning may be necessary to meet your maintenance standards.

Box, Paperwork & Accessories: This rifle comes in its original serial matching box with a manual and safety lock. The outer sleeve of the box shows considerable water damage. Please see the photos.

Our Assessment: The Winchester Model 1892 rifle and carbine replaced the toggle link action of Winchester’s Model 1873 with a breechblock locked with two rectangular locking bolts that made it much stronger and suitable for the higher pressures of smokeless powder. It was designed by John Browning and was sort of a scaled-down Model 1886 rifle, the first he designed for Winchester. The Model 1892 rifle was popular with ranchers and later was the rifle of choice for western movies and TV shows, John Wayne used both M1892 rifles and carbines in many of his western movies. The M1892 rifles again became popular in the 1980s with the advent of Cowboy Action shooting, as they were smooth and dependable. This is a quality Miroku recreation Winchester Model 1892 Deluxe Takedown Rifle made in 2008. The rifle is chambered in .45 Colt and has a 20? octagonal barrel and a takedown receiver. This rifle is in Excellent condition, appearing to have spent its life in the box. This rifle should be of interest to the Winchester collectors as well as cowboy action shooters. Please see our photos and good luck!