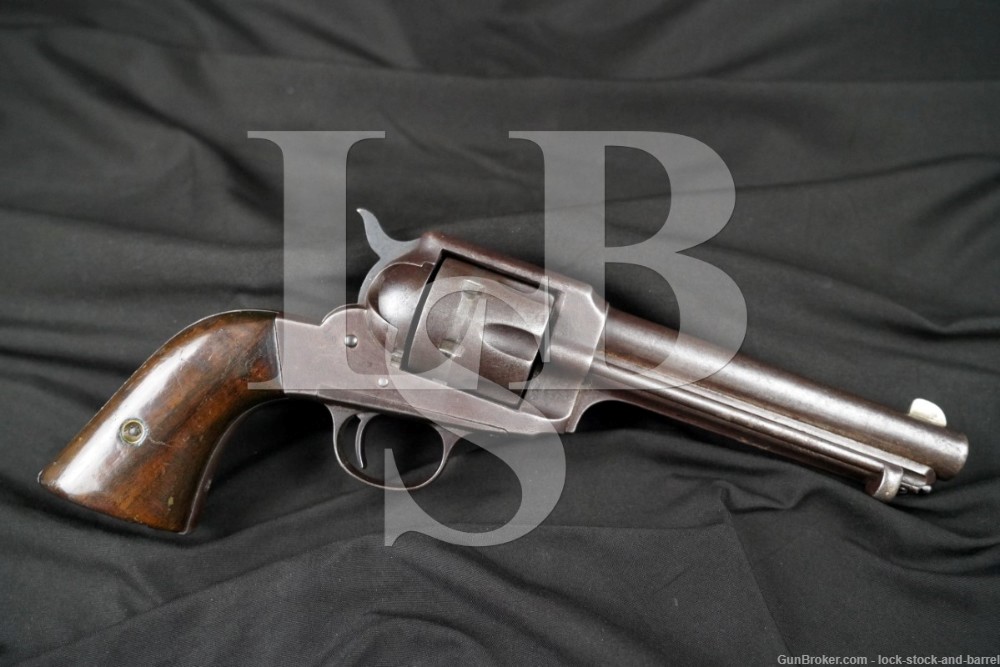 Sights / Optics: The front sight is a quarter-round blade fixed to the barrel. The rear sight is a square notch at the end of a groove in the top strap.

Bore Condition: The bore is dull with visible rifling where not interrupted by erosion. There is scattered erosion and pitting.

Overall Condition: This handgun retains less than 10% of its metal finish. The lanyard loop is missing. The metal has gone to a patina and has mottled finish loss and thinning. There are some scattered nicks and dings on the metal. There is a gap between the bottom of the frame and the trigger guard. There are scattered areas of erosion and light pitting. The firing pin is loose in the hammer. There is a thick turn line on the cylinder. The screwheads are tool marked. The markings are clear. Overall, this revolver is in about Good condition as Antique.

Mechanics: The cocking notches are worn and the hammer will not cock into full or half cock properly but the cylinder does rotate and the trigger and hammer do function. The firing pin is loose in the hammer. The cylinder has some side-to-side play and can easily be pushed out of the notch. We did not fire this handgun. As with all used firearms, a thorough cleaning may be necessary to meet your maintenance requirements.

Our Assessment: The 1875 SAA was basically a cartridge version of the Remington 1858 New Model Army which was very popular during and after the Civil War for its sturdiness and ease of disassembly. Unfortunately for Remington, their production release was two years too late, and Colt had already established their 1873 SAA, with large orders from the Army and civilian populace. Remington would go on to update it to the 1890 but before then they had a transitional model 1888 which is this model. The model was made specifically for Hartley & Graham when they took control of Remington and were made from mostly left over parts. The revolver was identical to the 1890 and had the web of the 1875 style ejector rod housing modified and removed. This one has quite a few later features including the rebated edge of the ejector housing at the frame and trigger but has the barrel markings which read frame-to-muzzle and a serial number under 1000. This one is serial number 561 and all of the known examples are under 1000. The revolver never saw commercial success and not many of these were made making it a nice piece for collectors of Remingtons and Antiques. Please see our photos and good luck!