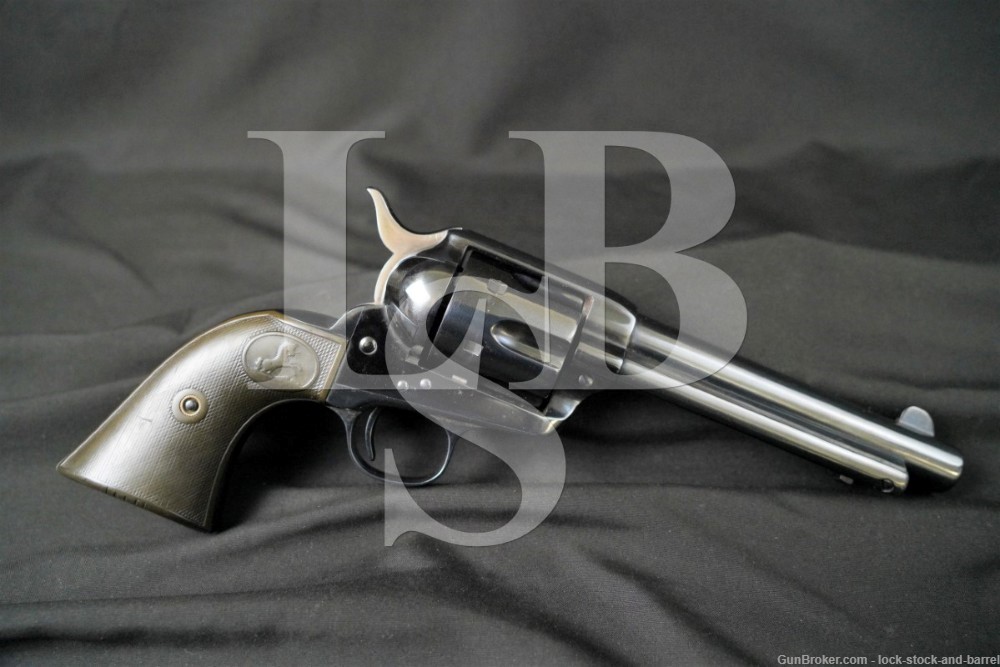 Sights / Optics: The front sight is a blade fixed to the barrel. The rear sight is a “V”-notch at the rear of the topstrap.

Stock Configuration & Condition: The grips are two-piece checkered black hard rubber with Rampant Colts in an oval at the tops of the grips. The inside of the left grip has been hand-scribed with “BA?” and what appears to be four numbers that do not match the serial number. The grips have gone to a slightly brown color due to age, showing fairly even light-moderate handling wear. There are five notches at the bottom edge of the right panel which appear to have been intentionally applied. There are a few light nicks and scuffs. The checkering ranges from well defined at the top-front, to areas worn smooth. There are no external chips or cracks, the interior of the right panel is cracked across the escutcheon boss. The grips are in about Good overall condition as not original to the gun.

Bore Condition: The bore is gray with well defined rifling. There is light erosion scattered through the bore with some spots of pitting.

Overall Condition: This revolver retains about 96% of its current metal finish. The new finish is generally strong throughout. There are a few scattered minor nicks, scuffs and scratches. There is infrequent minor surface oxidation. There is some scattered light erosion under the finish, most notable at the left-side frame markings. The action shows light operational wear. The screw heads range from sharp to lightly tool marked with strong slots. The markings range from clear to worn and incomplete. The revolver is in about Good to Very Good condition as refinished.

Mechanics: The action functions correctly. The cylinder locks up with light play and barely perceptible end-shake on each chamber. The trigger pull is crisp. We have not fired this revolver. As with all used firearms, a thorough cleaning may be necessary to meet your maintenance standards.

Our Assessment: The Colt SAA revolver and Winchester Model 1873 rifle were two guns that helped tame the Wild West of the United States in the last quarter of the 19th Century. This is a nearly one hundred and twenty-year-old Colt SAA 1st Generation revolver made in the Early Smokeless Powder period. The revolver has a 5 1/2 barrel, checkered hard rubber grips, and is chambered in .41 Long Colt. The .41 Long Colt was originally made for use in the M1877 Thunderer double action revolver. Although less potent than its better-known cousin, the .45 Colt, Elmer Keith in “Sixguns” wrote that it was a  better fight stopper than its paper ballistics would indicate. The revolver is in about Good to Very Good condition as refinished with the great majority of its new blue finish remaining. There is some wear and erosion in the bore, but the mechanics are still strong. All of the Colt 1st Generation revolvers are heavily collected, and we expect this one to be as well. Please see our photos and good luck!