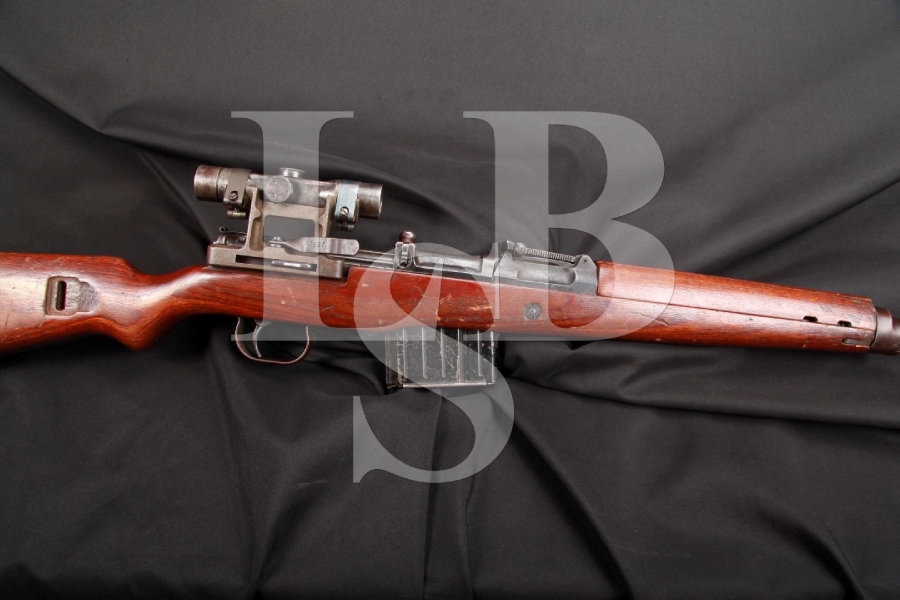 LSB#: 141202JM14
Make: Walther (“ac” is the Nazi code for Walther)
Model: Gewehr 43 or Karabiner 43 (abbreviated G43, K43, Gew 43, Kar 43)
Serial Number: 1324
Year of Manufacture: 1944
Caliber: 8mm Mauser (7.92x57mm)
Action Type: Semi-Automatic with Removable Magazine
Markings: There is no visible import mark. The left side of the receiver is marked “G43”, with a Nazi “eagle / swastika”, “a” “ac 44”, and with the serial number “1324”. The left rear of the receiver is marked “O”. The right side of the receiver is marked with an “eagle / 359” inspection stamp. The barrel, just in front of the receiver and under the handguard, is marked with a Nazi “eagle / swastika”, and “CVW”. The top left of the bolt body, under the charging handle, is marked “1253 e” and the top rear is marked with a faded “eagle / 214” inspection stamp. The top of the bolt body, of above the bolt face, is marked with an “eagle / 214” inspection stamp and with a Nazi “eagle / swastika”. The top left of the trigger is marked “E”. The left side of the butt stock is marked with a faded Nazi “eagle / swastika” and a faded Nazi Waffenamt. The left sling well is marked with a faded circular stamp. The bottom left of the magazine is marked “gcb”, K43” and with two Nazi “eagle / WaAB92” Waffenamts. The left side of the scope is marked “Gw”, “ZF 4”, “dow”, “triangle” and “5808”. The right side of the scope is marked with a “triangle” next to the adjustment knob. The scope mount is marked on the right with an “eagle / 359” inspection stamp and a faded “1324”, the rifles serial number. The left side of the compression lever is marked “fest” and the right is marked “lose”. See photos.
Barrel Length: Approximately 21 ¾”
Sights /Optics: The front sight is a bladed post set atop a ramped base. The rear sight is a “V” notched sliding elevator marked from “1-12”. The right side of the receiver has an integral scope base machined into it. The rifle comes with a ZF 4 scope and compression mount. The mount slides on the base and secures to it. The scope has cloudy glass and a post reticle. The lenses appear to be free of debris and scratches. The lenses need to be cleaned. The adjustment knobs turn. The top knob has hash marks on it and the side knob is marked from “1-8”. One of the mounting bands appears to be a replacement. The scope base and mount show fading, scratches and areas of frosting. The scope and mount are in about Good condition.
Stock Configuration & Condition: The two piece, laminate stock has a metal nose cap with sling loop, through bolt, sling well with pass through and a metal buttplate with hinged door for storage. The top of the hand guard is cracked from front to back. The cracks are off set and appear to be repaired or glued as the handguard holds together when it is removed. The right side of the buttstock shows a 4” long, thin crack. The remainder of the wood shows various scrapes, scratches and compression marks. The LOP measures 13 3/8” from the front of the trigger to the back of the buttplate. The stock rates in about Good overall condition.
Type of Finish: Blue
Finish Originality: Refinished
Bore Condition: The grooves are dark and the rifling is deep. There is erosion. The bore needs to be cleaned to remove fouling.
Overall Condition: The barrel and front sight show patches of surface erosion and areas of frosting. The receiver, bottom metal and top cover show scrapes, scratches, small areas of surface erosion and fading. The buttplate shows erosion and pitting. The nose cap shows surface erosion. The screw heads show heavy use. Most of the markings are deep, some are faded. Overall, this rifle rates in about Good to Very Good condition, as refinished.
Mechanics: The action functions correctly. We have not fired this rifle.
Box, Paperwork & Accessories: The rifle comes with a ZF 4 scope and mount: see above. The scope comes in a hard plastic case marked “DoscoSport” that shows light wear and scratches. It has two foam liners and is in about Very Good condition. The rifle comes with one 10-round magazine that shows scratches and wear. It is in about Good condition.
Our Assessment: This Nazi marked G43 was made in 1944 by Walther. It has Nazi markings and comes with a “dow” marked scope. The K43 has a much improved gas system (borrowed from the Russians) and is much more reliable than its predecessor the G41. This is a rare rifle that will add to any collection, especially a WWII collection. For some video history on the K43 (and G41 if you search) see the Forgotten Weapons You Tube channel at: http://www.youtube.com/watch?v=zUjPeAgvf3U. Some basics from Wikipedia: “Germany’s quest for a semi-automatic infantry rifle resulted in two designs – the G41 (M) and G41 (W), from Mauser and Walther arms respectively. The Mauser design was introduced in 1941 and at least 12,755 were made, but it proved unreliable in combat. The Walther design fared better in combat but still suffered from reliability problems. In 1943 Walther combined a new modified gas system with aspects of the G41 (W) providing greatly improved performance. It was accepted and entered into service as the Gewehr 43, renamed Karabiner 43 in 1944, with production amounting to just over 400,000 from 1943 to 1945.”