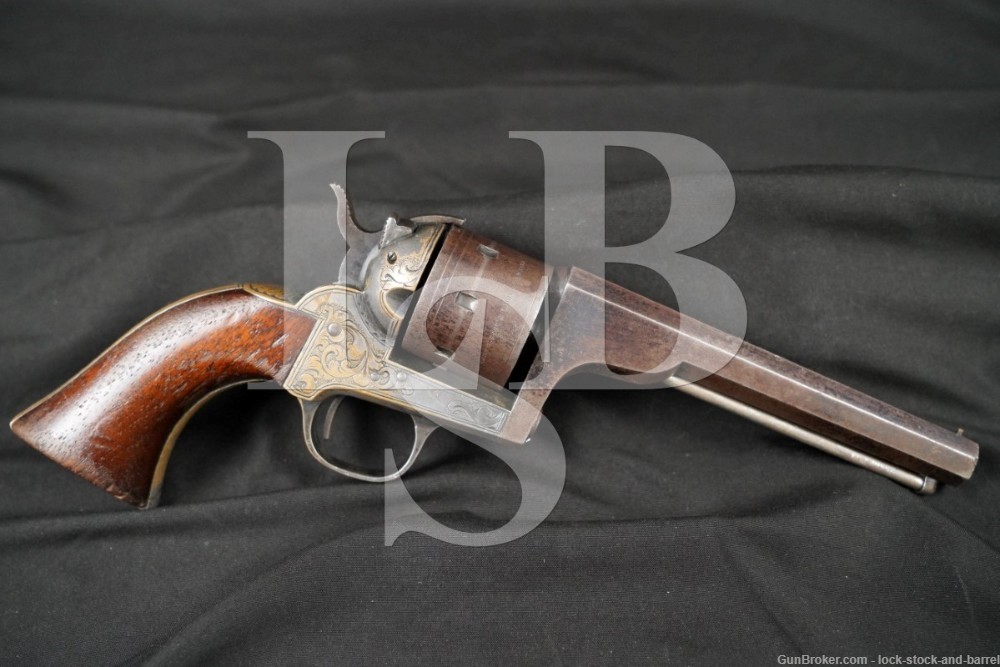 Sights / Optics: The front sight is a fixed small brass post. The rear sight is a “V”-notch in the nose of the hammer, visible when cocked.

Stock Configuration & Condition: The is one-piece smooth walnut. The grip has scattered finish wear with some light nicks, scuffs and scratches. There are a couple of more notable dings on the bottom. There are no chips or cracks. Overall, the grip is in about Fine condition as Antique

Bore Condition: The bore is gray and the rifling is sharp where not interrupted by erosion. There is scattered light erosion and pitting in the bore.

Overall Condition: This handgun retains about 35% of its metal finish. The barrel has scattered remaining blue finish with most areas gone to a light patina. The cylinder has strongest blue finish on the rear face with infrequent finish on the outside and the remainder gone to a light patina. The frame has worn to the brass in most grip areas and on the left recoil shield, but has some strong silver plate in other areas, darkened with age. There are some scattered light nicks, scuffs and scratches. The action shows operational wear including a turn-line on the cylinder. The screw heads are worn but serviceable. The markings are clear. Overall, this handgun rates in Very Good-Fine condition as Antique.

Mechanics: The action functions correctly. The button to the right of the hammer is pressed to allow the barrel and cylinder assembly to rotated out to the right enough to use the included ejector rod to push out shells. The rod is retained with a spring detent. The cylinder locks up with little play on each chamber and the barrel assembly has barely perceptible play to the frame. We have not fired this revolver. As with all used firearms, a thorough cleaning may be necessary to meet your maintenance standards.

Our Assessment: It’s hard to imagine today, but during the transition from percussion cap, muzzle-loading revolvers to cartridge revolvers, there was one man in the United States who held the patent on bored-through cylinders, Rollin White. Smith & Wesson was clever enough to obtain an exclusive license for White’s patent, but left much of the legal defense of the patent up to Rollin himself. It is a conundrum to create a revolver which accepts self-contained cartridges which is not open on both ends, but some ingenious inventors came up with workarounds. Other, less scrupulous, manufacturers would simply produce violating designs and wait for the inevitable lawsuit. In attempting to defend his patent, Rollin White would nearly see an Act of Congress passed to help his attempts to renew his patent, but it was vetoed by Ulysses S. Grant on the advice of his Chief of Ordnance, who apparently felt that White had been a significant hindrance to the war effort during the Civil War by his ceaseless litigation. White would ultimately spend a large portion of the money he made from his patent on such legal defense, and Smith & Wesson made out like bandits. Not only did they make huge amounts of money selling revolvers which legally utilized White’s patent, they would also frequently purchase existing inventory of the violators to help While recoup some of his legal expenses.

Daniel Moore of Moore’s Patent Fire Arms developed a design which was quite ahead of its time, but also infringed on the Rollin White patent. It was the first commercially produced “swing-out” cylinder revolver, nearly thirty years before Colt would come out with a true swing-out cylinder and nearly forty years before Smith & Wesson. The revolvers were produced in Brooklyn, New York from 1861 to 1863 and were quite popular with Union soldiers from New York. Despite the fact that there was a war on, White successfully sued the company for infringing on his patent and existing inventory was re-marked “MANFD FOR SMITH & WESSON”. This is one such example and is in quite good shape for its age. The revolver has matching numbered parts, a decent bore, and even retains some of its original finish. This revolver holds interest with collectors from a number of different fields, and will be a nice example of the Moore’s Patent Belt Revolver for the lucky winner. Please see our photos and good luck!