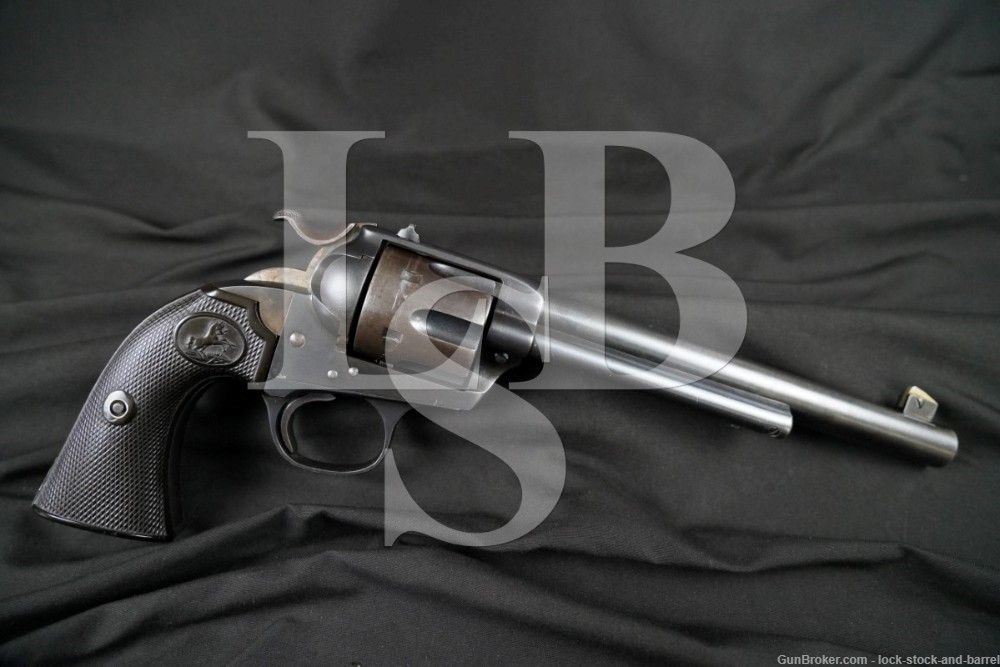 Sights / Optics: The sights have been replaced. The front sight is a german silver blade adjustable for elevation in a slotted base dovetailed to the front of the barrel. The topstrap has been milled flat with a square notch sight dovetailed to the rear of the topstrap.

Stock Configuration & Condition: The grips are two piece checkered black hard rubber with rampant colt in oval at the top of each panel. The backstrap has been checkered for additional grip. The grips have some minor nicks, scuffs and scratches, mostly around the edges. The checkering is mostly well defined with a few spots of slightly more notable wear. The rampant colts have good detail. There are no chips or cracks. The grips have minor rotational play to the frame.

Bore Condition: The bore is mostly bright with sharp rifling. There is a little bit of light erosion at the muzzle-end and along two lands in the right of the bore. There is stubborn leading in front of the forcing cone.

Overall Condition: This handgun retains about 85% of its current metal finish. The barrel has scattered light finish wear, some showing discoloration from oxidation, and there is some minor erosion at the muzzle-end. The frame has generally strong finish with some mottling in the side panels and more defined finish wear in the left panel below the hammer screw. The grip frame has generally strong finish with wear on each side above the grips. There are some scattered light nicks, scuffs and scratches with a concentration of more notable nicks along the bottom of the barrel next to the ejector housing. There is some minor erosion under the finish, most notable at the muzzle and on each side of the frame in front of the cylinder. The outside of the cylinder has mostly gone to a light patina with some blue in the flutes and generally strong blue finish on the rear face. The rear face has a few firing-pin marks between chambers. The action shows operational wear including a turn-line on the cylinder. The screw heads range from sharp to lightly tool marked with strong slots. The markings range from clear to worn and incomplete. Overall, this revolver is in about Good condition as refinished (see Mechanics).

Mechanics: The cylinder can be rotated out of lock to the left, only a short distance when the hammer is cocked, on each chamber without much effort. Otherwise, the action functions correctly. There is very little play on each chamber when the stop is engaged, though as noted it doesn’t take too much effort to push the cylinder out of lock to the left. The cylinder has a removable bushing. We did not fire this handgun. As with all used firearms, a thorough cleaning may be necessary to meet your maintenance requirements.

Our Assessment: The Colt Bisley was introduced in 1894 as a target pistol. The name Bisley came from the famous firing range in Bisley, England. The Colt Bisley can be distinguished by the longer grip, the wider hammer spur, and the wider trigger. These distinctive revolvers were serial-numbered in the range of 156300–331916, in the same sequence as the Single Action Army. This is an example of a 1st Gen. Bisley, made in 1912 and chambered for .41 Colt cartridges with a 7 1/2″ barrel. The revolver has been customized, closer to the original flat-top target model, with the topstrap milled flat, a rear sight dovetailed in place, and an elevation adjustable front sight installed on the barrel. The revolver’s new blue finish shows wear consistent with its age, and apart from the cylinder lockup needing a little work, the gun is in pretty good overall shape with a good bore for a 110 year old gun. This will make a nice addition to a Colt or old-West revolver collection. Please see our photos and good luck!