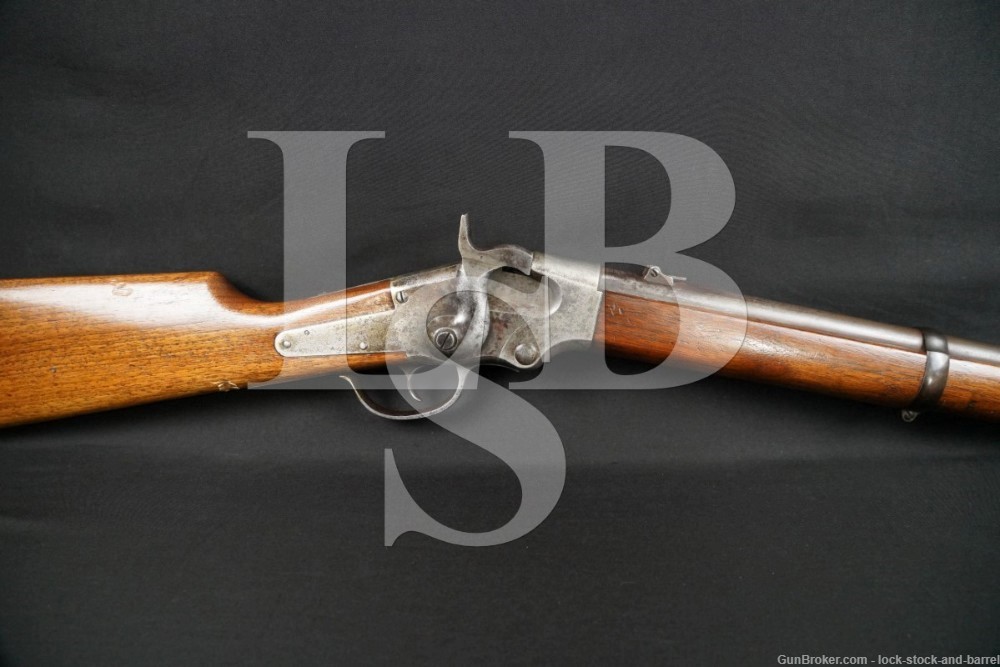 Stock Configuration & Condition/ Grip: The refinished stocks are two-pieces featuring a forend that house’s the tubular magazine, a forend cap, a replacement barrel band on the forend, a straight wrist, a straight comb and semi-crescent butt-plate. There is a sling bar on the left side of the action with a fixed saddle ring. The stocks have some light-moderate handling marks. Notably, there is a moderate ding on the right side of the stock above the tip of the bottom tang where the wrist meets the butt. There are no chips or cracks. The LOP is 13” from the trigger to the rear end of the butt-plate. The butt-plate is in the white, has some light handling marks, light surface oxidation and oil stains. Overall, the refinished Antique stock is in Good condition.

Finish Originality: Original with the exception of the barrel band which appears to be a replacement.

Bore Condition: The bore is semi-bright with mostly sharp rifling. There is erosion concentrated in the grooves and some pitting concentrated around the muzzle.

Overall Condition: The rifle has 3% of its metal finish. The replacement barrel band still has some of its bluing present but the rest of the carbine is coated in oxidation and have taken a patina color. There are scattered light handling marks, nicks and scuffs. Notably, there are some light nicks on the right side of the barrel behind the muzzle that extend past the front sight, the muzzle has some light handling wear and there is some moderate oxidation surrounding the rear sight. The markings remain clear. The screwheads have tool-marks but they remain serviceable. Overall, the carbine is in Very Good condition for an Antique.

Mechanics: The action functions correctly. The action is activated by manually cocking the Hammer, pulling the lever to chamber a round from the magazine into the chamber and then replacing the lever and depressing the trigger. To reload the rifle you cock the hammer, use the lever to lower the breechblock and load rounds manually into the magazine. We have not fired this rifle. As with all previously owned firearms, a thorough cleaning may be necessary to meet your maintenance standards.

Our Assessment: This is an E.G. Lamson & Co. manufactured Ball Carbine which was manufactured in 1865. The story of the unique carbine can be traced to Lamson, Goodnow & Yale which was a Vermont based company formed in 1861 to produce arms for the U.S. Government. In 1864, E.G. Lamson took sole control of the firm which was renamed E.G. Lamson and Co. He actively sought contracts for his firm to support the Union War Effort. He soon partnered with Albert Ball to manufacture the specimen we have here.

The carbine was designed by Ball in 1864 for use by skirmishers and cavalry, and Lamson bought the patent rights to the design. The design also impressed the US government which proceeded to place an order for 1,002 units with E.G. lamson & Co. Ball would serve as Lamson’s superintendent during the production cycle of his namesake carbine. While similar in a number of aspects to the more famous Spencer, the Ball Carbine’s magazine is seated in the forend under the barrel instead in the butt. The company ultimately honored its contract with the government, delivering the order in May of 1865. Unfortunately the contract was fulfilled a month too late for service in the Civil War and there is no record of any others being manufactured.

This specimen has had some minor restoration work with refinished stocks and a replacement barrel band but otherwise appears to be in its original configuration. Despite having wear consistent with its age, the gun still retains its aesthetic charm and is mechanically sound. This is a rare antique with only 1,002 units ever manufactured. It would make a unique addition to any historical firearms collection and is still functional. Good luck on your bid!