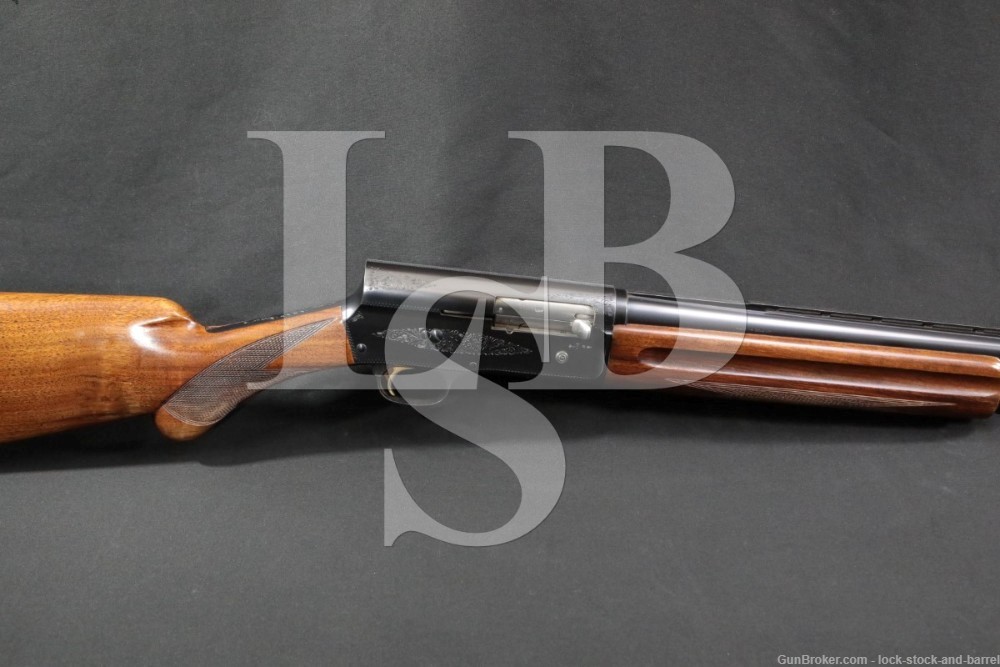 Sights / Optics: There is a silver colored bead at the front of the rib. The top of the rib and receiver are checkered for glare reduction.

Stock Configuration & Condition: The stocks are a two-piece checkered walnut set with a round-bottom pistol grip, finger grooves running the length of the forend, straight comb and a black hard rubber FN Browning Automatic buttplate. The forend has a cluster of nicks and scratches at the left-rear with a small loss in the lip at the rear which fits inside the receiver (concealed when assembled). The buttstock has some minor handling wear in the checkering, one notable scratch on the right-rear and a few other scattered light marks. There are no cracks. The checkering is well defined. The LOP measures approximately 14 1/8″ from the front of the trigger to the back of the buttplate. The plate has light wear with a few tiny losses around the edges and well defined lettering. Overall, the stocks are in about Very Good condition.

Overall Condition: This shotgun retains about 97% of its metal finish. The finish is thinning lightly at some edges. The action has minor operational wear. Otherwise, there are only light handling marks. The screw heads range are sharp . The markings are clear. Overall, this shotgun is in about Fine condition as not parts original.

Mechanics: The action functions correctly. A wooden magazine limiter is installed in the magazine tube, easily removed out the front. There is a magazine cutoff on the left front of the receiver, a safety at the rear of the trigger guard and a bolt release on the right side of the receiver. We have not fired this shotgun. As with all used firearms, a thorough cleaning may be necessary to meet your maintenance standards.

Browning would eventually license the design to FN in Europe and later to Remington for their Model 11 and to Savage Arms for their Models 720 and 755. These designs went on to be a great commercial success, the first truly successful autoloading shotgun. This Auto-5 was built by FN in 1954 and is a desirable “Sweet Sixteen” model with Grade I engraving on the receiver and tangs. It is chambered for 2 ¾” 16 Gauge shells and has had the barrel replaced with a 27 1/2″ vent-rib barrel choked Full. The gun appears to have been well cared for, in Fine condition despite being nearly 70 years old. This should still make for a great hunting gun for the lucky winner but would also make a neat addition for collectors. Please see our photos and good luck!