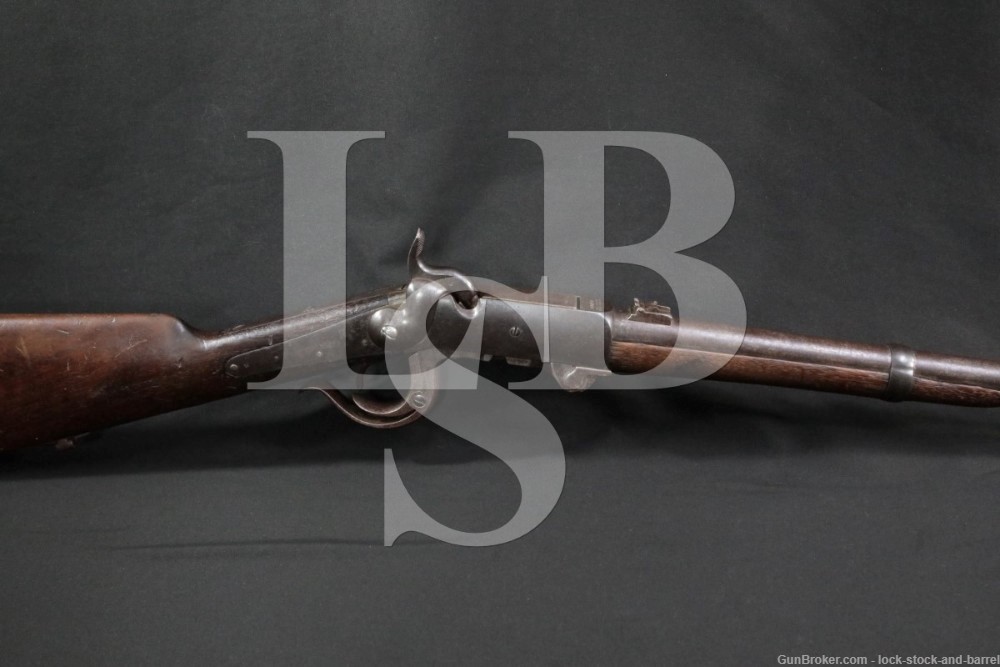 Stock Configuration & Condition/ Grip: The stocks are two-piece wood featuring a forend with a spring secured barrel band that is screwed to the barrel, a straight wrist, a straight comb and metal butt-plate. There is a sling bar on the left side of the receiver with a fixed saddle ring and sling swivel fixed to the belly. The stocks have light-moderate handling marks, scuffs, compressions and nicks. Notably, there is a large ding on the left side of the wrist, a light crack on the heel and some moderate wear at the toe. The LOP is 13” from the trigger to the rear end of the butt-plate. The butt-plate is has some light handling marks and is coated in light-moderate surface oxidation. Overall, the stocks are in Very Good condition for Antiques.

Bore Condition: The bore is semi-bright with mostly sharp rifling. There is some erosion concentrated around the left side of the bore.

Overall Condition: The rifle retains 5% of its metal finish. There is trace bluing scattered on the carbine, but the majority of the rifle is coated in light-moderate surface oxidation and has taken a patina color. There are some light-moderate handling marks, nicks and scuffs. Notably, there is a small patch of erosion at the bottom of the barrel, loacted slightly behind the front sight. The markings remain clear. The screwheads have tool-marks, but they remain serviceable. Overall, the rifle is in Good condition for an Antique, due to mechanical issues.

Mechanics: The nipple has been plugged and the action is a bit finicky, although it does engage. The rifle can not be fired in its current state. A percussion cap is needed to fire the carbine. To load the gun, squeeze the lever release that will drop the breechblock (located in front of the trigger), load a cartridge into the chamber and replace the lever into its original position. We have not fired this rifle. As with all previously owned firearms, a thorough cleaning may be necessary to meet your maintenance standards.

Our Assessment: This is a Burnside Rifle Co. manufactured Burnside Carbine which was produced in 1862. The Burnside Carbine was invented by Ambrose Everett Burnside whose life took some unexpected turns. Burnside graduated from the United States Military Academy in 1847 and saw service during the Mexican-American War. He resigned his commision in 1853 to work on a breech-loaded rifle but the project did not bear fruit for him, his factory was destroyed and money he spent to fund a political campaign led to his bankruptcy. During his bankruptcy, Burnside’s weapon design was sold off and he never shared the ensuing profits made by his namesake carbine. He was later selected to serve as a general in the Rhode Island State Militia and when the Civil War broke out he was quick to march a unit, the 1st Rhode Island Infantry, to Washington DC in order to protect the capital. His later battlefield performance during the Civil War is generally considered to be abysmal and he resigned his commision after General Robert E. Lee’s surrender at Appomattox. As an aside, the term side-burn pays homage to General Burnisde’s hairstyle.

This specimen is well preserved with clear markings. The nipple has been plugged and the hammer is a bit finicky but otherwise the gun’s parts still function normally. This carbine is a third model Burnside Carbine with the distinct patent stamp on the top of the frame and distinct features; that particular model was only in production during 1862. This is a must have option for fans of historically relevant firearms and Civil War aficionados. Good luck on your bid!