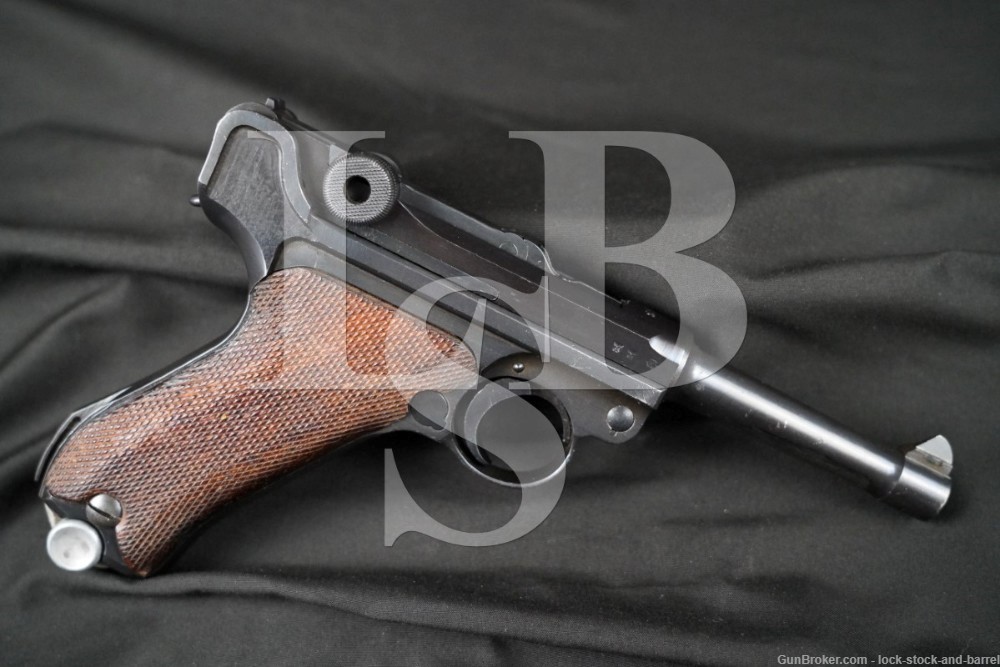 Stock Configuration & Condition/ Grip: The grip panels are two-piece checkered wood. The grip panels have light handling marks, nicks and scuffs. Notably, the panels have some scattered patches of black discoloration, there is a notable nick at the center of the right panel and a small ding at the front-bottom portion of the right panel. The checkering remains mostly sharp. There are no chips or cracks. Overall, the grips are in Very Good condition.

Overall Condition: The pistol retains about 70% of its metal finish. There are some light-moderate handling marks, nicks and scuffs. Notably, there is finish loss around the muzzle, some finish loss concentrated on the bottom of the barrel and a small patch of nicks on the right side of the barrel. The trigger sideplate, which is not original, has lost a good deal of finish and has some light pitting visible beneath the bluing. The markings remain clear. The screwheads have light tool-marks but they remain serviceable. Overall, the pistol is in Very Good condition.

This particular Luger was manufactured in 1938 five years after the NSDAP came to power in Germany. That year Germany began to flex its military might with a European war nearly erupting over the Sudeten Crisis. Ultimately, France reneged on a treaty obligation to defend Czechoslovakia at Britain’s behest. Neville Chamberlain, the British PM, helped facilitate Germany’s annexation of the Sudetenland (a part of Czechoslovakia which was populated by ethnic Germans). Chamberlain would famously proclaim after the crisis that he had secured “peace for our time” through his diplomacy. Unfortunately, it would prove a premature statement as WWII broke out a year later. The pistol’s Waffenamts are consistent with army issued small arms, but the gun has a number of parts which are not original. Among the mismatched items are the included magazine, the breechblock, front toggle, rear toggle, extractor and trigger side plate. Although this luger is not entirely in its original configuration, having a number of replacement parts, it remains an aesthetically pleasing and ergonomic pistol, and while it has some handling wear it is still an impressive handgun. If you are a fan of German military arms and WWII history then this is the handgun for you. Good luck on your bid!