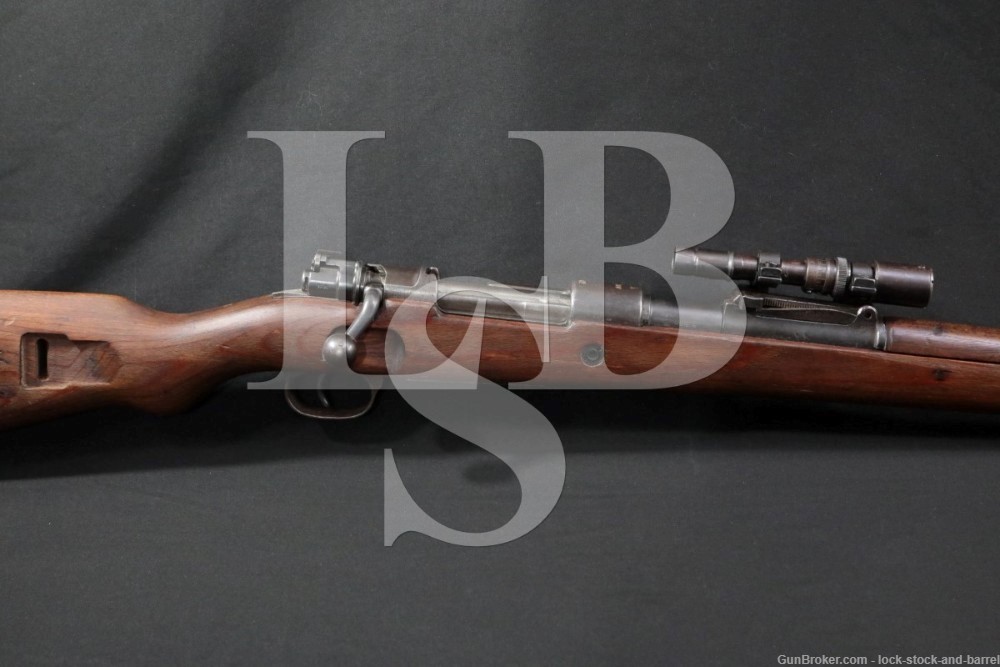 Sights / Optics: The front sight is an inverted “V” post set atop a raised base. The rear sight is a “V” notched blade attached to a sliding sight escalator marked from “1-20”. There is an integral scope rail on the left side of the rear sight base.
The ZF 41 scope mount uses a spring loaded lever to lock the scope in place.
The scope and base mate properly but it is a VERY tight fit. A mallet is necessary to install or remove the mount. The scope base shows scrapes, discoloration and surface erosion. The fixed 1.5 power scope uses a post reticle pointed at the tip. The view is cloudy & discolored with several small black flecks throughout the view. The elevation drum functions; it raises and lowers the reticle’s post.
The scope assembly rates in about Good condition.

Stock Configuration & Condition: The laminate stock has a pistol grip, scallop for the bolt handle, nosecap, hole for the missing cleaning rod, barrel band with sling bar, through bolt, sling well, sling pass through, domed washer, and a metal buttplate. The tip of the nosecap retaining spring has broken off. The nosecap is held on by compression and by a small portion of the retaining spring. The buttplate and stock hardware show scrapes, scratches and discoloration. The buttplate also shows light surface erosion. The right side of the butt shows a hairline surface crack and several large scrapes that have been oiled. The front of the forearm shows deep scrapes from the nosecap being removed. The wood shows several other scrapes, scratches & compression marks. Most of these marks have been oiled. The LOP measures 13 inches from the front of the trigger to the back of the buttplate. The stock rates in about Very Good Plus overall condition.

Overall Condition: The metal has been treated with cold blue. This rifle retainslabout 25% of its current metal finish. The top of the barrel shows surface erosion and pitting. The metal shows scrapes, small scratches, discoloration from oxidation, and areas of light surface erosion. The right side of the rear sight shows several small dents. The screw heads show use & oxidation. The 2 small capture screws are missing from the bottom metal. The markings are well defined. Overall, this rifle rates in about Very Good condition.

Box, Paperwork & Accessories: The rifle comes with a scope assembly; see above.

Our Assessment: This German K98 Sniper was made by Berlin-Lübecker Maschinenfabrik (BLM) of Germany back in 1942. The rifle has since been rebuilt. It has seen some use but still has nice markings. The markings include “eagle / swastika” stampings on the receiver. The rifle has a ZF 41 Scope assembly installed which includes a rear sight base with an integral scope rail. We do not know if the scope was originally paired with the rifle or if it is a replacement as both the rifle and the scope have been rebuilt. This K98 Sniper will add to a WWII or Military collection. Good luck.