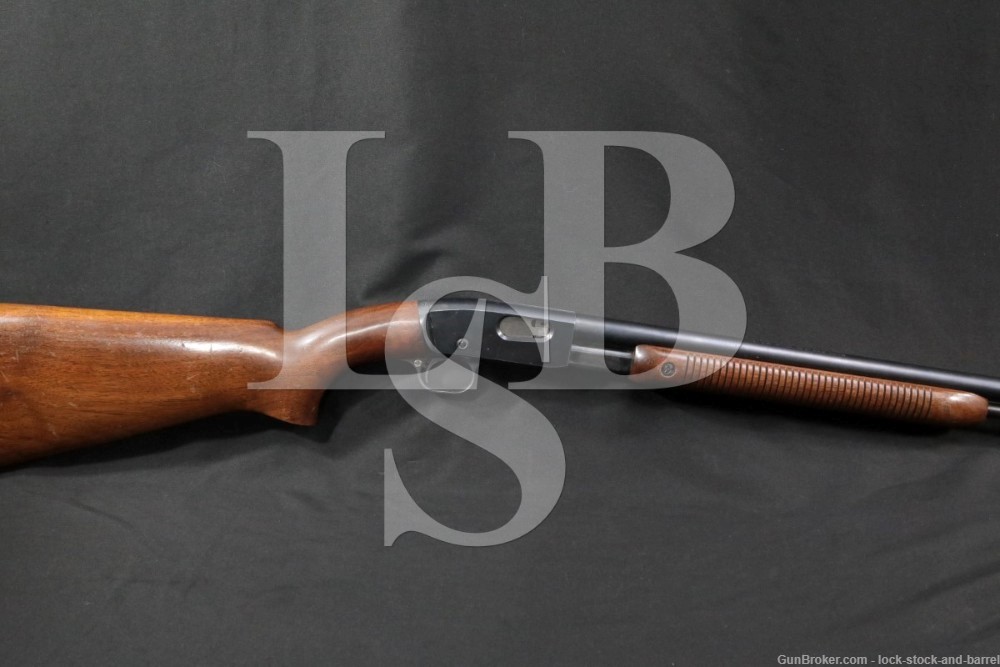 Stock Configuration & Condition: The stocks are wood, the buttstock is smooth and has a straight comb, pistol grip, and checkered steel buttplate. The forend has grooves with a smooth bottom. The bottom of the forend has a crack on the bottom at the front. There are scattered compressions, dings, scrapes, and scratches. There are areas of thinning and finish loss. The LOP measures about 13 3/4” from the front of the trigger to the back of the buttplate, which shows some scattered finish loss, spots of light oxidation, and little marks through the finish. The stocks rate in about Very Good overall condition.

Bore Condition: The bore is bright with no erosion. There is some fouling in the expanded portion of the bore.

Mechanics: The action functions correctly. We have not fired this rifle. As with all used firearms, a thorough cleaning may be required to meet your maintenance standards.

Our Assessment: Back in 1908 Remington wanted something to compete with Winchester’s famed Model 94 but the faster, smoother operation of a pump gun had a lot of advantages. John Pedersen, the inventor of the Pedersen device used on rifles in WWI, had already designed several Remington shotguns. He was given the assignment to design a high-power pump to compete with Winchester’s lever actions. He started with the Model 12 rimfire model in 1909 and designed its big brother, the Model 14 in 1912. The Model 12 and 14 rifles were butter smooth with a magazine tube that moved with the slide. This is a Model 121 which was the improved replacement of the Model 12. In addition to the standard rifled offerings, Remington also produced smoothbore rifles and Routeldge rifles for use with rimfire shot. They produced only about 3,000 of the Smoothbore models so this is a nice find for the Remington fans. The rifle is in about Very Good condition with about 87% of its finish remaining. This would make a neat addition to a collection of Remmingtons or early American pump-action rimfires! Please see our photos and good luck!