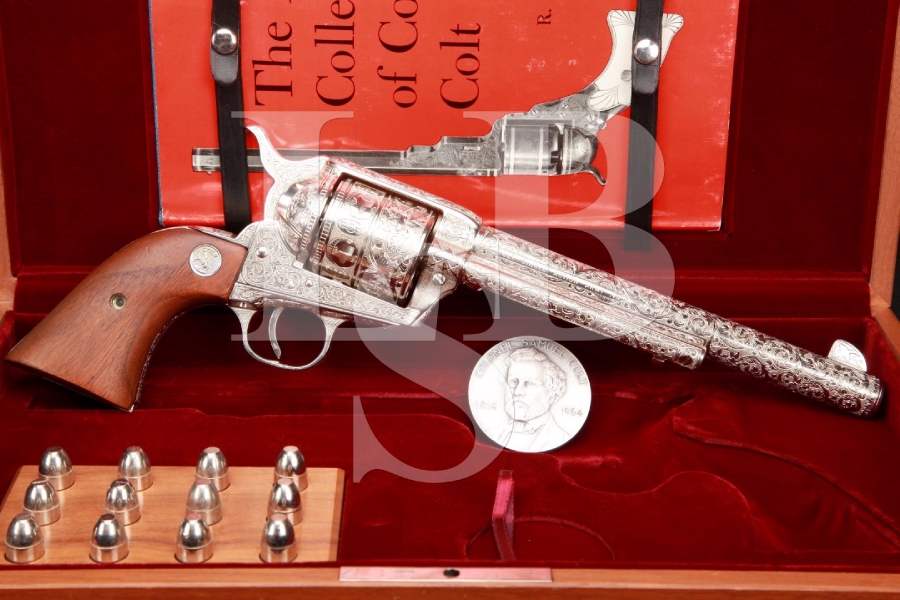 LSB#: 141218PS14
Make: Colt’s Patent Firearms Manufacturing Co.
Model: 2nd Generation Single Action Army, One of 5000 Colonel Saml Colt Sesquicentennial Model
Serial Number: 3281SC
Year of Manufacture: 1964
Caliber: .45 Colt
Action Type: Single Action Revolver with Side Loading-Gate Cylinder
Markings: The top of the barrel is marked “COLT’S PT. F.A. MFG. Co. HARTFORD, CT. U.S.A.” The left side of the barrel is marked “PAT. SEPT. 19, 1871 / JULY 2, 72 JAN. 19, 75” and with a Rampant Colt which has a ‘hat’ logo on the haunch. The underside of the frame is marked “3281SC”. The right side of the barrel is marked “COLT SINGLE ACTION ARMY .45”. The assembly number on the loading gate is “980”. The left inside of the trigger guard and backstrap are marked “3281SC”. The rear face of the receiver is marked with Kenny Majors’ Hat and “KM” logo and a Rampant Colt. The front face is stamped “281”.
Barrel Length: 7 ½”
Sights / Optics: The front sight is a blade with a curved front surface and vertical rear surface, engraved and fixed to the barrel. The rear sight is “U” groove milled into the top strap with a square notch rear face.
Stock Configuration & Condition: The smooth two piece walnut grips sport a nickel Rampant Colt medallion on each panel. Spots of material are missing from the left panel on the lower front edge. A compression mark appears on the butt and side of the left panel. Two small compression marks and handling marks are evident on the right panel. The left panel’s fit to the contour of the backstrap is not tight and the front edge appears to have been rounded. The fit of both panels to the top of the back strap is shy. The grips rate in about Very Good overall condition.
Type of Finish: Nickel
Finish Originality: Refinished
Bore Condition: The bore is bright and the rifling is sharp. There is no erosion in the bore.
Overall Condition: This handgun retains about 99% of its metal finish. This pistol started as a Colonel Samuel Colt Sesquicentennial commemorative, but has been exquisitely engraved by Kenny Majors. The design is floral scroll work with the background meticulously stippled and an American shield emblazoned on the top of the backstrap. The edges of the recoil shield, loading gate and rear edge of the cylinder sport a border of small ovals. The unfluted cylinder is stippled with oval designs around and between the locking slots. Ivy scroll work fills the forward 2/3 of the surface. A section of the cylinder reads “COL. SAMl COLT / 1814-1964”. The screw heads are sharp. The markings are clear. Overall, this handgun rates in about Excellent condition.
Machanics: The action functions correctly. We did not test the action nor fire this handgun. It is likely that this pistol is in unfired condition.
Box, Paperwork & Accessories: The pistol comes in the original wooden Colt display case. A silver plaque which reads “One of 5000 / COLONEL SAMl COLT / SESQUICENTENNIAL MODELS / 1814 – 1964” is screwed to the lid. Shallow scratches are visible on the plaque and scattered shallow marks are present on the case. Mars in the finish are evident at the front edge of the lid and a notable scratch is visible on the left rear corner of the lid and on the right end of the case. The interior if the case is lined in burgundy velvet and filled with a form fit lid which holds a book and a form fit floor which holds the pistol, a commemorative medallion which features a bust of Samuel Colt and is inscribed “COLONEL SAMUEL COLT / 1814-1964”, which is in Excellent condition. A wooden form which holds 12 rounds of .45 Colt cartridges also can be found within the case with 12 dummy loads of .45 Colt with nickel cases and nickel plated bullets. There does not seem to be any propellant in the cases and the primers have firing pin indentations. The wooden form is in Excellent condition. The rounds exhibit marks from handing and are in Fine condition. The cut out in the lid holds a copy of “The Arms Collection of Colonel Colt” by R.L. Wilson. The book is held into place with two leather straps which snap together. The jacket of the book exhibits minor fraying around the edges at the binding, and scattered spots of surface loss. The page bindings are unbroken and the book is in Very Good condition. A key in Excellent condition is present. The burgundy velvet on the floor exhibits compression marks from contact with the pistol. The box is in Very Good condition.