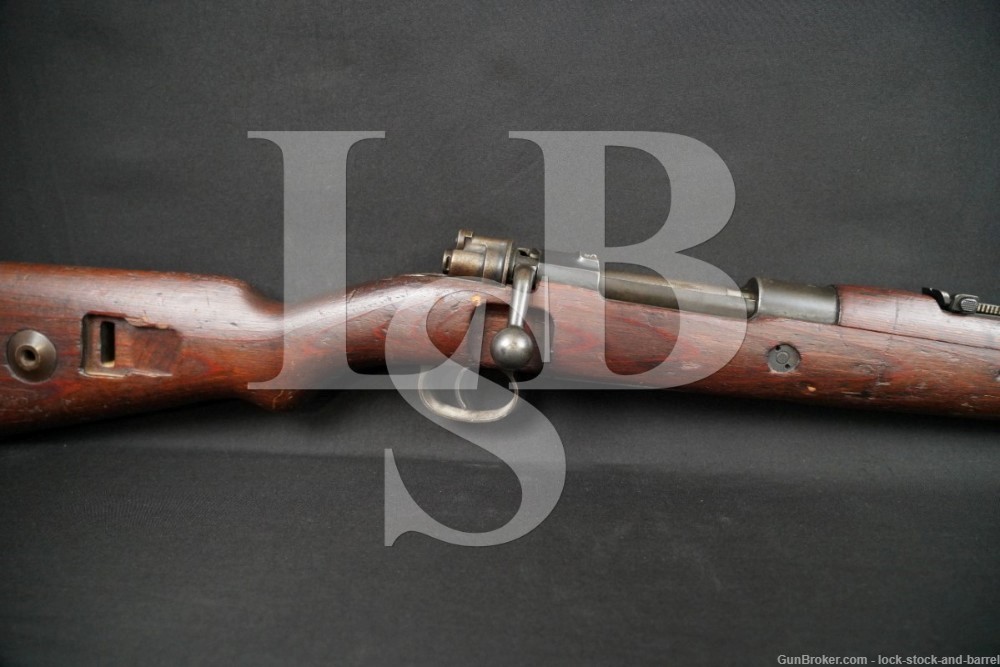 Sights / Optics: The front sight is an inverted “V” post set atop a raised base and under a protective hood. The rear sight is a “V” notched sliding escalator marked from “1-10”.

Stock Configuration & Condition: The two piece laminate stock has a pistol grip, scallop for the bolt handle, nosecap with bayonet lug, hole for the missing cleaning rod, barrel band with sling bar, through bolt, sling well, sling pass through, domed washer, metal butt plate, and a metal protector plate on the left side of the stock. The buttplate and side plate show scratches, discoloration and light surface erosion. The stock hardware shows scratches & discoloration. The wood shows numerous scrapes, scratches and compression marks. Several have damaged or removed small portions of the surface wood. The LOP measures 13 inches from the front of the trigger to the back of the buttplate. The stock rates in about Very Good overall condition.

Bore Condition: The muzzle & grooves are gray and the rifling is deep. There is erosion in the bore. It is more prominent in the grooves and at the muzzle.

Overall Condition: The metal has been treated with cold blue. The rifle retains about 25% of its current metal finish. The metal shows scrapes, scratches and discoloration from oxidation. The magazine floor plate also shows small dents and surface erosion. The screw heads show heavy use. The markings are deep. Overall, this rifle rates in about Good condition.

Our Assessment: This is a rare WWII German marked G 33/40 Mountain Carbine. Its finish has some issues but it still has deep markings on the metal. These Mausers were only built at the Brno factory in Czechoslovakia. They are patterned after the Czech VZ 33. The first production Carbines of 1940 were marked “945” and used a walnut stock. Subsequent carbines were marked “dot” and most used a laminate stock. Many of the G 33/44 carbines were issued to the German “Gebirgstruppen”, or Mountain Infantry, where the metal plate on the left side of the butt was used to keep the stock from harm while using the rifle for assistance in climbing.
For more info (including the quote) see pages 223 to 225 of Robert Balls, “MAUSER Military Rifles of the World” Fifth Edition:
“The German Model 33/40 Carbine has always been a highly prized addition to any Mauser Collection”.