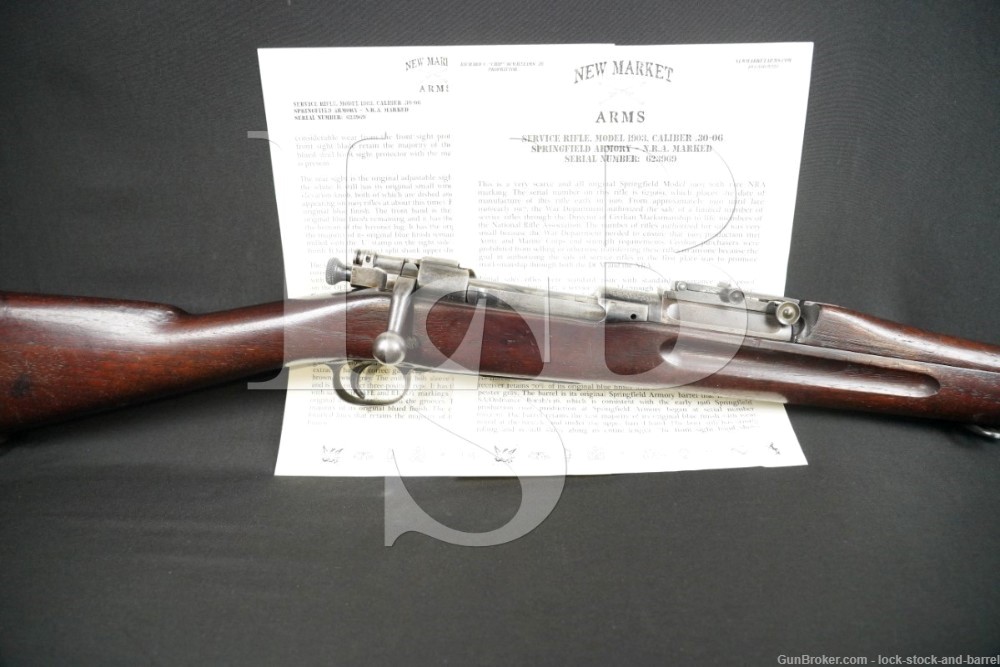 Sights / Optics: The front sight is a pinned blade atop a raised base. It is set under a removable protective hood. The rear sight is a “U” notched blade attached to a fully adjustable sight ladder marked from “3-27”. When flipped up separate notches and an aperture on the ladder can be used for sighting.

Stock Configuration & Condition: The two piece hardwood stock has a straight grip, nosecap with bayonet lug, stacking loop, barrel band, 2 sling loops, through bolt and a metal buttplate with hinged door for storage. The nosecap shows scrapes, thinning and discoloration. The wood shows several scrapes, scratches and compression marks. The LOP measures 13 inches from the front of the trigger to the back of the buttplate. The stock rates in about Very Good overall condition.

Finish Originality: Original. The receiver and front of the barrel have  been treated with cold blue.

Bore Condition: The muzzle and grooves are gray. The rifling is deep. There is erosion in the bore. It is more prominent in the grooves and at the muzzle. The bore shows an M.E. of 2.5.

Overall Condition: The receiver and front of the barrel have  been treated with cold blue. This rifle retains about 66% its current metal finish. The metal shows scrapes, scratches and discoloration from oxidation. Surface erosion shows through the cold blue finish on the barrel. The bolt and right side of the receiver show operational wear. Some of the screw heads show heavy use. The main markings are deep. Some of the small markings are well defined. Overall, this rifle rates in about Good to Very Good condition.

Box, Paperwork & Accessories: The rifle comes with paperwork documenting the purchase of the rifle. The rifle also comes with a front sight protector and a metal oiler tube containing a pull through thong.

This Springfield Armory 1903 is an NRA Sales Rifle. It was made back in 1916 and still uses its original 1916 dated Springfield barrel. It is distinctly marked “N.R.A.” on the bottom metal which makes the rifle quite collectible.
NRA Sales Rifles were sold by the Director of Civilian Marksmanship (DCM) which was the forerunner to the Civilian Marksmanship Program (CMP). They were only sold to N.R.A. members in the 1913-1916 time frame. They were issued by both Springfield Armory and Rock Island Arsenal. Although not marked with the traditional “star” gauge, the barrels were air-gauged for bore quality to ensure they were the best available barrels for the target shooters. They are identified by the “flaming bomb / N.R.A.” stamp on the forward section of the bottom metal to denote that they were sold through the D.C.M. to an N.R.A. member. This scarce 1903 will add to your Military collection. Good luck.