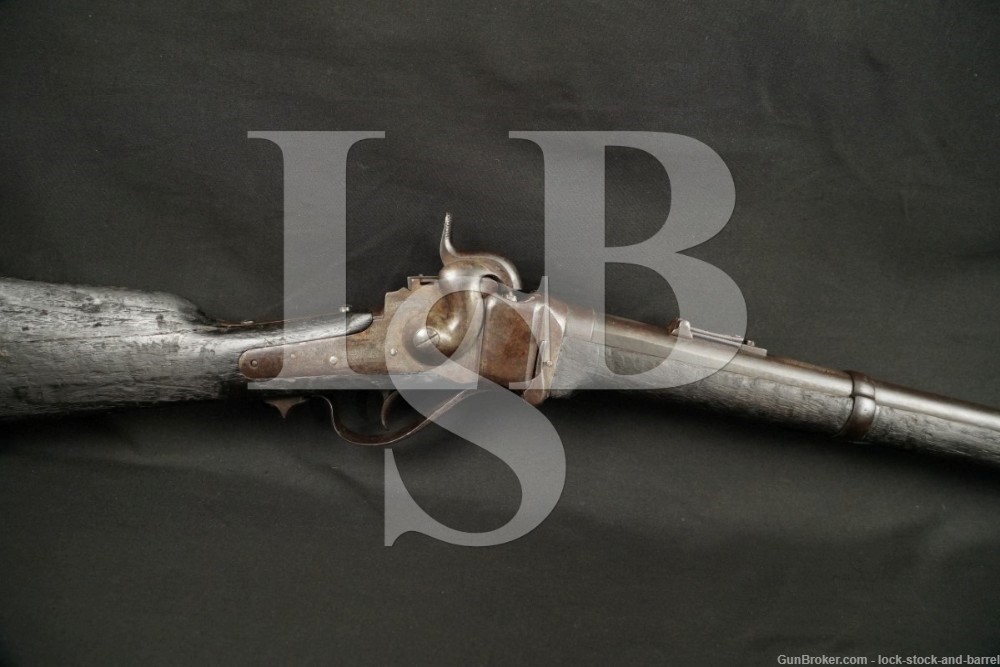 Sights/ Optics: The front sight is a blade fixed by the muzzle. The rear sight is a ladder which presents a “V’-notch in the down position. When raised the ladder has a “V”-notch integral to the top of the ladder. There is no slider included with the rear sight and it is coated in erosion and the markings are not visible.

Stock Configuration & Condition/ Grip: The stocks are two-piece wood featuring a forend cap, a total of three barrel bands secured by springs (a sling swivel is fixed under the center barrel band), a straight wrist, a straight comb, a metal patchbox, a sling swivel fixed to the belly and a metal butt-plate. The stocks have scattered moderate-heavy handling marks, dings and compressions. Notably, there is a crack on the right side of the forend, just behind the cap. Also, there is a long crack that circumvents the butt from the left side of the butt-plate around the top-tang across the right side of the butt. The crack has some wood filler which has been applied, but there are gaps which are not filled. Additionally, there are some small holes concentrated on the left side of the wrist and a ding behind the bottom tang with a few light cracks extending from it. The LOP is 13.75” from the trigger to the rear end of the butt-plate. The butt-plate and patchbox are coated in moderate-heavy oxidation with some pitting scattered on the butt-plate. Overall, the stocks are in Fair condition for Antiques.

Bore Condition: The bore is grey with mostly sharp rifling. There is scattered pitting in the bore.

Overall Condition: The rifle retains none of its metal finish. The gun is coated in moderate-heavy patches of oxidation and has taken a patina color. There are scattered light-moderate handling marks, nicks and scuffs. Notably, there is some light wear around the muzzle, a patch of nicks behind each barrel band and some scattered light pitting on the barrel, concentrated on the bottom of the barrel ahead of the forend. Some of the markings are obscured by wear but they all can still be clearly made out. The screwheads have tool-marks but they remain serviceable. Overall, the rifle is in Good condition for an Antique.

Box Paperwork and Accessories: None. The front sight is designed to allow the attachment of a socket bayonet (no bayonet is included).

Our Assessment: Christian Sharps was a weapons designer who was born in 1810. He worked at Harpers Ferry early in his career and was impressed by John H. Hall’s breech-loaded rifle (the first American breech-loader which was originally built with a flint-lock system) which would inspire Sharps to develop his own breech-loader. His breech-loaded design was patented in 1848 and the first units entered production in 1850. The following year Sharps Rifle Manufacturing Company was formed, Christian Sharps served as a technical advisor to his namesake business receiving a royalty on every unit that was sold. Despite being named after him, Sharps left his namesake company in 1853 and formed a new company C. Sharps & Co. where he remained until the Civil War broke out.  In 1862, as a consequence of the Civil War, Sharps partnered with William Hankins to form Sharps & Hankins with most of the company’s production dedicated to military contracts. After the war Sharps continued to work until 1874 when he succumbed to illness.

The Sharps rifle would be put to use in Kansas during the 1850s when a series of violent clashes erupted between abolitionists and pro-slavery settlers. The rifle was popular with the abolitionists and nicknamed the “Beecher’s Bible” after prominent abolitionist Henry Ward Beecher. When the Civil War broke out the Sharps Rifle was sold to the Federal Government and issued to a number of Army and Navy units. It was particularly popular with marksmen, who put it to good use.

This Sharps Rifle is a New Model 1863 which was made in 1865 (despite the designation, the production of the Model 1863 was done in 1865). The New Model 1863 production extends from serial number C30,000-C40,000 (this gun is serial number C38559). The gun is distinguished from other Sharps Rifles by the socket bayonet attachment front sight fixed by the muzzle. The gun has wear consistent with a 19th century weapons system but mechanically it still remains sound. This is a beautiful gun that should prove a worthy addition to any collection.