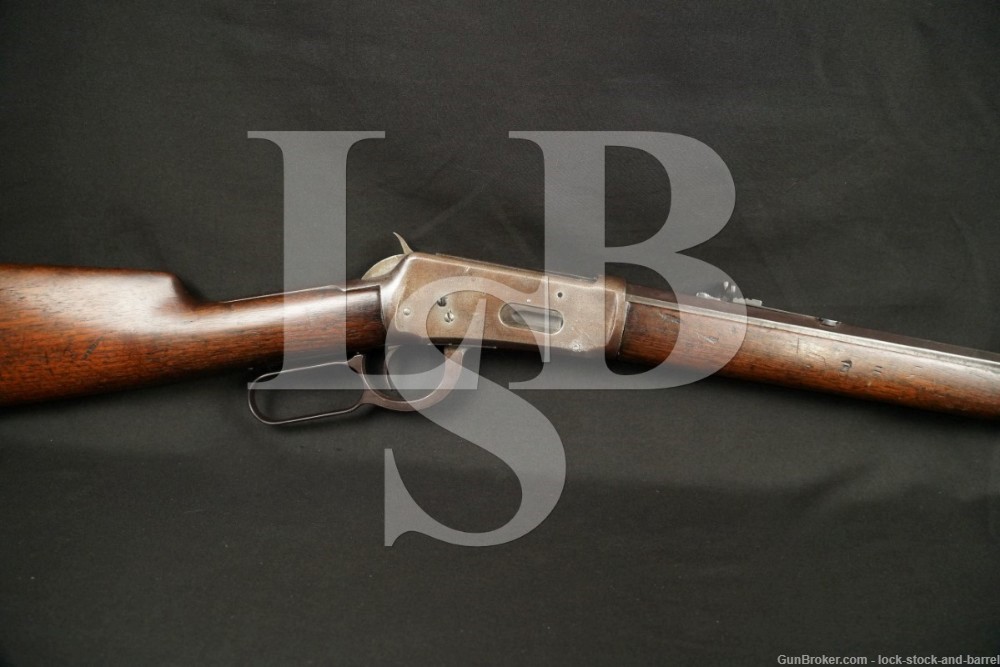 Stock Configuration & Condition: The stocks are 2-piece smooth walnut with capped forend, straight grip, straight comb and steel crescent buttplate. The stocks have scattered light-moderate nicks, dings, scuffs and scratches. There is a crack at the left-front of the forend. There is a small loss at the top-front of the wrist on the left. There are a few other minor losses which have been finished over. The LOP measures 13″ from the front of the trigger to the back of the buttplate. The plate has gone to a moderate patina with edges worn to white and some scattered light marks. Overall, the stocks are in about Good-plus condition as refinished Antique.

Finish Originality: Original, the rear sight’s elevator tab appears to be a replacement.

Bore Condition: The bore is dark with well defined rifling. There is light-moderate erosion throughout the bore, more notable in the grooves.

Overall Condition: This rifle retains about 5% of its metal finish. The finish remains only in protected areas such as the bottom of the barrel, the top of the magazine tube and portions of the lever assembly concealed when the action is closed. Other portions of the barrel and magazine have gone to a moderate patina, the receiver has gone to a lighter patina. There is some scattered light surface erosion with more notable erosion along the top of the receiver and bolt. There are scattered nicks, dings, scuffs and scratches, the most notable appear to be tool marks around some screw heads and the magazine bracket. The screw heads range from tool marked with strong slots to disfigured with useable slots. The markings are clear. Overall, this rifle is in Good-plus condition as Antique (see Mechanics).

Mechanics: The lever safety does not properly prevent the trigger from dropping the hammer. Otherwise, the action functions correctly. The hammer has a half-cock safety and a lever safety is present, though it is not functioning properly. The lever lock-ups properly and the trigger is crisp. We did not fire this rifle. As with all used firearms, a thorough cleaning may be necessary to meet your maintenance standards.

Our Assessment: This is a Winchester Model 1894 Rifle made in the second year of production. Its 26″ octagonal barrel is chambered for .38-55. The .38-55 WCF was originally developed by Ballard and could push a 250gr projectile at about 1,300 fps. This makes it a nice rifle for black bear and other similar sized game and has remained a somewhat popular cartridge, perhaps most due to the large number of Winchester rifles chambered for the round. The gun has honest wear consistent with use in the field over the last 125 years. This early Winchester M1894 rifle may interest the Winchester collectors with its “been-there, done-that” appearance, but would also be well worth restoring and getting back out in the field. Please see our photos and good luck!