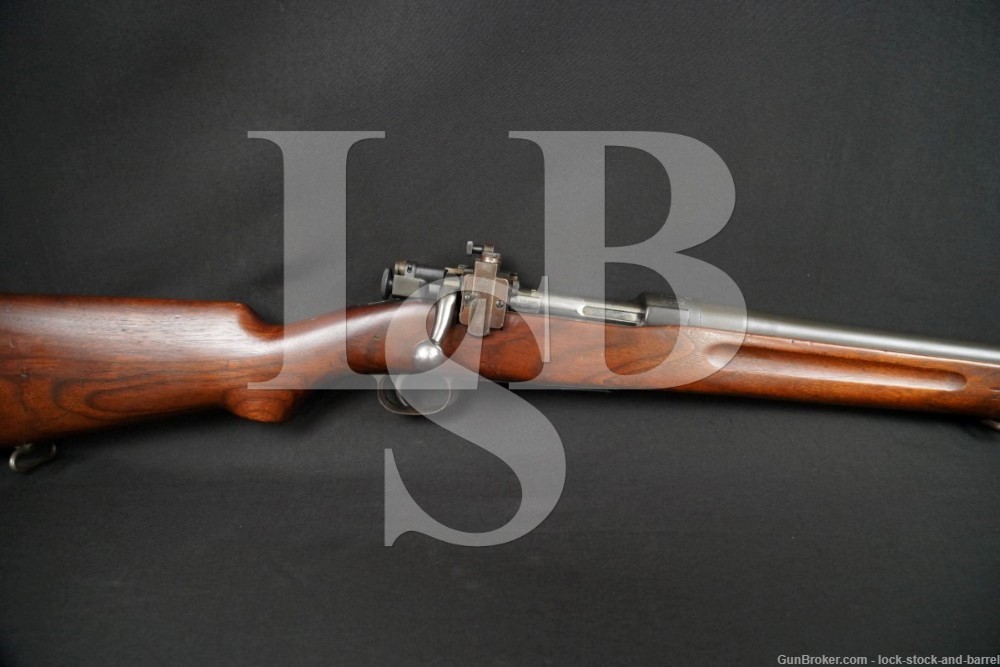 Markings: The top of the barrel is marked “S A / flaming bomb / 6 – 42”. There is a faint seam below the date (see Mechanics section below). The left side of the barrel shank is marked “LONG RIFLE / CART’GE ONLY”; this marking is upside down. It has been restamped.
The top of the receiver is marked “U.S. / SPRINGFIELD / ARMORY / MODEL OF 1922 / MII CAL. .22 / 6642 B”. The second “I” and the “B” were added during the upgrade. The safety lever is marked “SAFE READY”. The top of the bolt handle is marked “N S” for nickel steel as well as “M2”. The bottom of the bolt handle is marked “F”. The bolt body is faintly marked “4266B” in electric pencil. The bolt body is marked “M2” ahead of the lug. The barrel band is marked “U”. The front sight is marked “LYMAN”. The right side of the rear sight is marked with the Lyman logo. The left side of the buttstock is marked with a partial Springfield Armory Arsenal Rebuild stamp “SA / G” in a “box”. The “G” has been restamped. The base of the grip is marked “1”.

Stock Configuration & Condition: The hardwood stock has a pistol grip, finger grooves, barrel band, 2 sling loops and a checkered metal buttplate. The wood shows several scrapes, scratches & compression marks. Some have damaged small portions of the surface wood. The top of the butt is missing a chip of wood at the buttplate. The LOP measures 13 1/4 inches from the front of the trigger to the back of the buttplate. The stock rates in about Very Good overall condition.

Bore Condition: The bore is bright. The rifling is crisp. There is no erosion.

Overall Condition: The rifle retains about 95% of its metal finish as refinished. The front sight band shows scratches, thinning and discoloration. The barrel shows scrapes & thin scratches. The remaining metal shows scuffs and handling marks. The screw heads show heavy use. The markings are deep. Overall, this rifle rates in about Very Good Plus condition as refinished.

Mechanics: The top portion of the barrel is an extension that has been timed to match the .22 rifling. It appears that the chamber and/or rifling have been recut. The muzzle crown has been recut. The barrel has been turned down to fit a front sight band.
The action functions correctly. We did not fire this rifle. As with all used firearms, a thorough cleaning may be necessary to meet your maintenance requirements.

Box, Paperwork & Accessories: The rifle comes with an unmarked 5 round magazine. The magazine shows scrapes from insertion & removal. It is in about Very Good Plus to Fine condition.

Our Assessment: The final designation Model 1922 .22 caliber trainers is the M2. This is an important and valuable U.S. rifle made by Springfield Armory. These rifles were designed to mimic the full size Springfield Model 1903’s, yet were chambered in .22 LR. The goal was to give soldiers trigger time on a Springfield 1903, without the expense of .30 Caliber ammo. Many M2s were used for civilian competition shooting. The Springfield M2 has become a desired collector’s piece.
This 1922 M2 started life as a Model 1922 MI. It was Arsenal Rebuilt by Springfield Armory and brought up to M2 specifications. An extra “I” was added after the “MI” and a “B” was added after the serial number to indicate the upgrade (page 55 of Joe Poyer’s book, The M1903 Springfield Rifle and its Variations, 3rd Edition).
The rifle has since been refinished and the barrel modified. The top portion of the barrel is an extension that has been timed to match the .22 rifling. It appears that the chamber and/or rifling have been recut.
This is a good looking Model 1922 with a strong bore. Good luck.