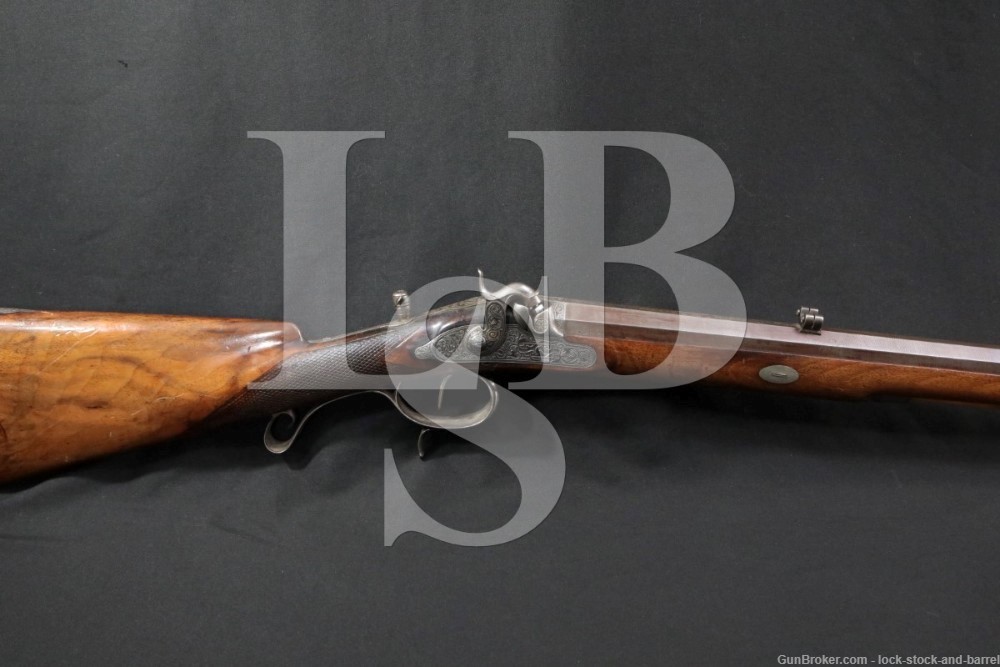 Markings: The top of the barrel is marked “CLESSE À MONS” which indicates the rifle was made in Mons, Belgium. The left side of the barrel is marked with the belgian proof “E / LG / *” inside an oval (used on all firearms from 1811-1893) and has a marking obscured by the stock further ahead. There are scroll engravings on the metal parts of the rifle (please see photos).

Sights/ Optics: The front sight is a dovetailed blade. The rear sight is a “V”-notch fixed to a dovetailed base. There is a provision on the top tang to instal a diopter (none is installed or included).

Stock Configuration & Condition/ Grip: The stock is one-piece refinished wood featuring a black hard rubber forend cap, three forend wedges, two ferrules, a brass cap at the front of the forend slot for the included ramrod, a lock-plate, a checkered straight wrist, a straight comb and metal butt-plate. There is a brass cross on the belly which appears to be missing a retaining screw and metal tang on the bottom of the forend alos missing a retaining screw. There is a slot where a pin had been installed that is now empty on the forend behind the middle wedge. The stock has scattered light compressions, nicks and scuffs. Notably, there is a ding on the right side of the wrist. There are no chips or cracks. The LOP is 12.5” from the trigger to the rear end of the butt-plate. The butt-plate is in the white, has some light-moderate handling wear and is coated with light surface oxidation. Overall, the stock is in Very Good condition for a refinished Antique.

Bore Condition: The bore is mostly bright with sharp rifling. There is light erosion concentrated in the grooves and stubborn fouling in the bore.

Overall Condition: The rifle retains about 90% of its metal finish. There are a few scattered patches of light surface oxidation on the gun’s metal surfaces. Also, the gun has some light handling marks, nicks and scuffs. The markings remain clear. The screw-heads have tool-marks but they remain serviceable. Overall, the rifle is in Fine condition for an Antique.

Our Assessment: This is a Belgian manufactured Jaeger Rifle which was manufactured in Mons. During the 19th century Belgian gained its independence from the Netherlands and quickly established one of the most robust gun industries of the time. Belgian made arms were marketed across the globe, and they were easily distinguished by the Liege Proof House markings stamped on their parts. Despite undergoing a turbulent history that included a brutal German occupation in both World Wars the country continues to manufacture some of the best arms on the planet.

This particular specimen is a Belgian hunting rifle styled after the Central European Jager Rifle popular in the parts of Europe that make up modern Germany.  They were considered among the best hunting rifles of the time period. The earliest examples used the flint-lock system, but many of these original rifles would eventually be converted to the percussion ignition system and the production of Jaeger Rifles extended well into the percussion age. This rifle lacks some of the features typically seen on jager rifles (there is no patchbox and it has a single trigger) but otherwise stays true to the original concept. This example has a beautiful Damascus barrel and eye-catching scroll engravings that add to its charm. Mechanically, the rifle still functions normally which makes this quite the specimen. The marking on the top of the barrel indicates the gun was made in Mons, and it has typical Belgian proof marks. This is a beautifully crafted Antique that you will not want to miss out on!