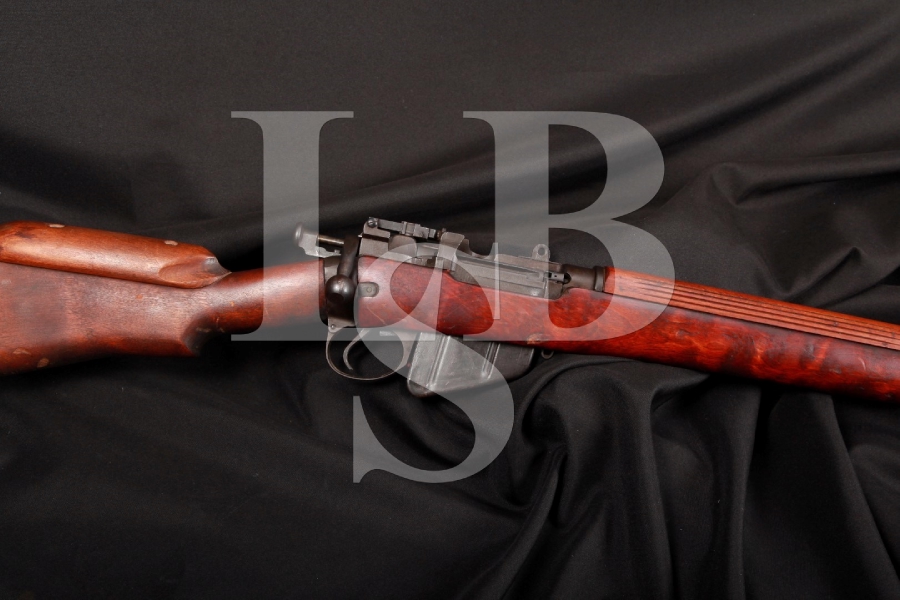 111 Sights / Optics: The front sight is a Patridge style blade dovetailed into a base on the barrel, protected by military style ears that are finely checkered on their edges. The rear sight is a folding ladder sight pinned to the top rear of the receiver. This is a standard 1st Variation Mk I sight with the battle sight aperture ground off so that the rifle may be used with a scope. When the ladder is folded up, there is an aperture in the center of the slider. The slider is raised and lowered with a Vernier screw with a serrated knob at the top of the ladder. The rear face of the ladder is marked from “2” to “13” with an “S” in the top left corner. There is also an “S” on the left side of the slider. The rear face of the slider is finely checkered to reduce glare. There are also scope mount pads screwed to the left front and rear of the receiver.

Stock Configuration & Condition: The stocks are dark walnut with an oiled finish. They consist of a buttstock and a full length forend and handguard. The buttstock has a semi-pistol grip and an alloy “Zamac” buttplate with a hinged cover over a hole in the stock for an oiler (not included.) There is a wooden cheekpiece screwed to the top of the comb and sling swivels installed at the toe and on the rear forend/handguard band. Both the forend and the handguard have a blue steel nose cap and there is a front band around the nose caps. The handguard is a 2nd Variation with four longitudinal grooves along either side of its rear half. There is heavy oil staining in the buttstock and forend. There are two chips on the rear edge of the toe and several fairly deep compression marks on both sides of the buttstock. There are also compression marks on the right side of the wrist, abrasions in the wood above the trigger on the left side, and a deep compression mark on the right side at the front of the magazine. There are several compression marks along the length of the forend and a mark in the top of the handguard just behind the rear forend/handguard band. The LOP measures 13 ¼” from the front of the trigger to the back of the buttplate, which is shy of the wood at the toe and on its sides. The buttplate shows only a few minor marks. The stocks rate in about Very Good to Fine overall condition.

Type of Finish: The finish is a matte black oil darkened finish.

Bore Condition: The bore has five grooves, and is bright with sharp rifling. There is no erosion.

Overall Condition: This rifle retains about 95% of its metal finish. There are marks through the finish in the front of the barrel, front sight ears, the nose caps and the front forend/handguard band, which also shows thinning on its edges. The rear forend/handguard band shows a few small compression marks and thinning on its lower edges. There are a few small spots of solid erosion on the chamber ring, the front scope mount pad, the safety bolt spring and the sides of the rear sight ladder. There is a light mark on the left side of the chamber ring, thinning on the edges of the safety and rear sight slider and thinning and a small compression mark on the bolt knob. The safety serrations show very light wear. Most of the screw heads are sharp. The two buttplate screws and the screw at the front of the magazine well are distressed. The markings are clear. Overall, this rifle rates in about Fine to Excellent condition, and would be Excellent except for the stock.

Mechanics: The action functions correctly. This rifle has a 2nd variation handguard, a 1st variation safety locking bolt and a 1st variation rear sight (albeit with the battle sight ground off for scope use). The bolt knob is a 1st variation with a round button-like shape similar to those used on the SMLE No. 1 rifles. The bolt is removed by simply pulling it back about ½” and then simply lifting up on the bolt head. We have not fired this rifle.

Box, Paperwork & Accessories: A 10-round magazine with a matte black oiled finish is included with the rifle. The rear flat on the magazine is marked “E”. There is a dent, marks through the finish and small compression marks in the bottom surface, while the body shows thinning from wear. The magazine is in about Fine condition.

Our Assessment: The Lee-Enfield bolt-action, magazine-fed, repeating rifle was the main firearm used by the military forces of the British Empire and Commonwealth during the first half of the 20th century. It was the British Army’s standard rifle from its official adoption in 1895 until 1957. From “British Enfield Rifles”, Vol. No. 2 by Charles Stratton: “Very early on in WWII, the British government saw the need for a telescopically-sighted sniper rifle built on the NO. 4 action. The sniper rifles available at that time were Pattern 1914 (No.3) rifles fitted with scopes and mounts, but only a couple thousand of these had been made and even fewer were available. In the late 1930s, a new scope, the No. 32 Mk I telescope, had been developed for the BREN light machine gun. In 1940, about 1400 No. 4 rifles were equipped with these scopes and fitted out as sniper rifles at RSAF-Enfield. This represents the beginning of the sniper role for the No. 4 series rifles. No special competition models of the NO. 4 rifle in .303 British were adopted for military use by the British. Instead, standard issue rifles were re-worked by unit armorers and individual competitive shooters to improve accuracy.” This is a Lee Enfield No. 4 Mk 1* (T) rifle in .303 British made by Savage in 1942. All of the numbers on the metal (except the magazine) are matching. The stock was made by Savage, but the forend has a different serial number which has been crossed out. The receiver is fitted with scope mount pads and the stock is fitted with a wooden cheekpiece. The rifle is in about Fine to Excellent condition with about 95% of its original finish remaining. The stock shows several deep compression marks but the bore is bright with sharp rifling. This is a great find for the collector of British weapons from WWI and WWII. There weren’t that many sniper rifles made and fewer yet survived WWII. No SMLE collection would ever be complete without one of these.