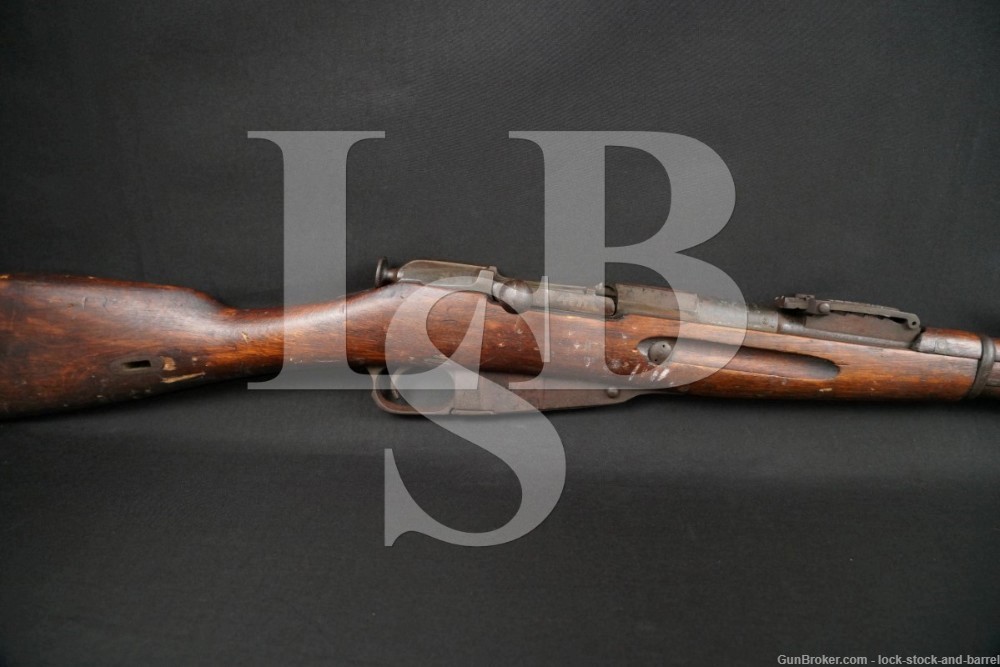 Sights/ Optics: The front sight is a dovetailed blade by the muzzle. The rear sight is an old Imperial Russian style ladder sight presenting a “V”-notch in the down position. The left side of the base features arshini measurements “12”, “10”, “8”, “6” and “4”. When raised, the ladder presents a “V”-notch slider and is numbered 32-13 inclusive in the old Russian arshini system of measurement.

Stock Configuration & Condition/ Grip: The stocks are two-piece wood featuring a forend cap, a handguard, a slot in the forend for a cleaning rod (none included), a total of two barrel bands secured by springs, a sling eyelet between the barrel bands, finger grooves on the forend, a through bolt, a straight wrist, a slightly curved comb, a sling eyelet at the center of the butt and metal butt-plate. The stocks have moderate handling marks, nicks, scuffs and compressions. Notably, the wood bordering the bottom portion of the forend where there is a provision for the cleaning rod is worn, with a notable ding on the front left portion ahead of the front barrel band. Also, there are a few small scattered patches of white paint on the forend, with a patch on the right side behind the sling eyelet’s washer and under the right side of the through bolt. Additionally, the wood is worn at the toe, there is a ding at the front of the butt’s sling eyelet washer and one slightly ahead of that ding, both on the right side of the butt. The LOP is 13.5” from the trigger to the rear end of the butt-plate. The butt-plate is coated in moderate surface oxidation and has some moderate handling wear. Overall, the stocks are in Good condition.

Bore Condition: The bore is grey with mostly sharp rifling. There is erosion concentrated in the grooves.

Overall Condition: The rifle retains none of its metal finish. The gun is coated in moderate surface oxidation and has taken a patina color. There are scattered light-moderate handling marks, nicks and scuffs on the gun’s metal surfaces. Notably, there is moderate wear scattered on the front of the barrel around the front sight and muzzle. The markings are obscured by oxidation but they can still be made out. The screwheads have tool-marks but they remain serviceable. Overall, the rifle is in Fair condition.

Mechanics: The bolt is missing its head which will need to be replaced and the spent casing ejection mechanism is currently not functional. We did not fire this rifle.  A thorough cleaning may be necessary to meet your maintenance standards

Box Paperwork and Accessories: None. Please note, there is no cleaning rod included with this rifle.

Our Assessment: This is a Mosin 1891 Dragoon Rifle chambered for 7.62x54R cartridges which was produced in 1916 at the height of WWI. The Dragoon variant of the Mosin Three Line Rifle was introduced shortly after the original 1891 entered service with the Imperial Russian military. It was initially designed for service with the Dragoons (elite cavalry) and despite sharing most of the M1891’s specifications its barrel was a few inches shorter and had sling eyelets in lieu of swivels. The Imperial Russian government also designed two other prominent variants of the Mosin Three Line Rifle, the Cossack and M1907 Carbines, both of which were discontinued at the beginning of WWI. When WWI broke out Russia’s industry proved incapable of meeting the demands placed on it by the war effort, and the Tsar sought assistance from foriegn sources to address the issue. Contracts were secured with several American firms to manufacture the standard M1891 Mosin, and there were attempts to secure aid from its allies battling Germany in the West (France and England).

Russia ended up fighting a two front war against Imperial Germany and Austro-Hungary in the West and the Ottoman Empire in the East. While the Russian military managed to resoundly defend its Eastern border and stymie Ottoman attempts to annex Muslim majority portions of the nation, in the West the war effort quickly descended into disaster. Sensing that Russia would not be able to defeat Germany, in 1916 the British dispatched Lord Kitchener of Khartoum to help assist the STAVKA (Russian High Command) in better coordinating its war effort in 1916, but the ship he was on was sunk by a U-Boat en-route to Russia. By 1917 Russian losses continued to mount and inspired further public discontent against the Tsar. Ultimately the Monarch was forced to abdicate in 1917. The Western Allies exerted diplomatic pressure on the new government under Alexander Fyodorovich Kerensky to continue fighting the war, but the Russian military was imploding from internal discontent. By the end of the year Kerensky was overthrown and the Bolsheviks seized power, the new government was quick to sign a draconian one-sided peace treaty (the Treaty of Brest-Litovsk) forced upon it by Berlin. Russia quickly descended into Civil War, the new Bolshevik Government battled against the White Movement. Despite freeing large forces for a final push in the West, Germany was defeated in 1918, the same year the Tsar was executed by the Bolsheviks in order to prevent a Romanov restoration. After winning WWI, a British led coalition (the United States, Japan and France) launched an intervention to overthrow the Bolsheviks but their Red Army managed to defeat the Whites and their foriegn backers.

This rifle was manufactured during this chaotic and bloody period.  The gun was manufactured at the Izhevsk Arsenal. The arsenal was established during the Napoleonic Wars in order to allow Moscow to continue producing war material even when its facilities in the West were threatened (an effort that would bear fruit during WWII). The rifle has wear consistent with a WWI-era weapon system, it could have been pressed into service in any number of conflicts. The bolt will need work to be restored to full working order and the ejection mechanism does not work. Despite the gun’s mechanical issues it is still a rare WWI-era artifact and would make a great addition to any historical firearms collection. Good luck on your bid!