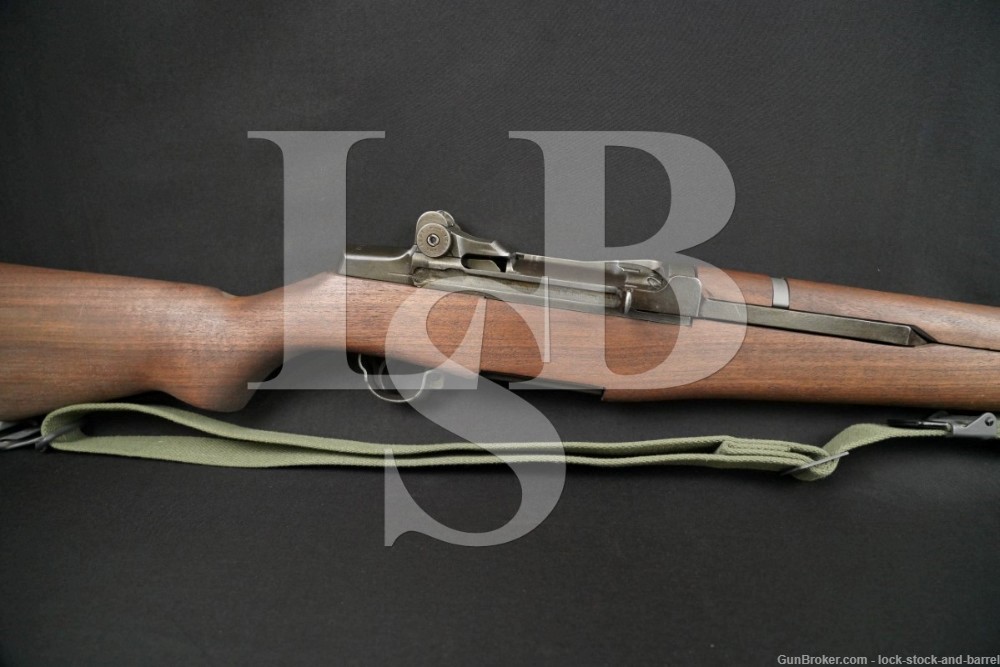 Stock Configuration & Condition:  The left side of the stock is marked with a Civilian Marksmanship Program stamp “C.M.P. / eagle holding arrows”.
The new production hardwood stock has a pistol grip, metal nose caps, a stacking loop, two sling loops, and a metal buttplate with hinged door for storage in the butt. The bottom of the forearm shows scrapes & scratches from the sling buckle. The wood shows a few other scrapes and handling marks. The LOP measures 13 5/8 inches from the front of the trigger to the back of the buttplate. The stock rates are about Very Good Plus to Fine condition.

Bore Condition: The bore is gray. The rifling is well defined; shallow at the muzzle. There is erosion throughout the bore. It is heavier in the grooves and at the muzzle. The bore shows an M.E. of greater than 5. Our gauge tops out at 5. The throat shows a T.E. of 3.5.

Overall Condition: This rifle retains about 87% of its metal finish as refinished. The metal shows scrapes, scratches and areas of discoloration from oxidation. The bottom rear of the receiver shows light surface erosion and thinning. The receiver legs show some thinning. The receiver and bolt show operational wear.  The markings are well defined. Some of the markings of the rear of the receiver are slightly faded. Overall, this rifle rates in about Very Good Plus condition as refinished.

This Springfield Armory M1 Garand was built back in 1943. After WWII it served for a U.S. friendly country and was eventually imported back into the U.S. for sales to the civilian market. It is marked accordingly on the barrel. The rifle has been rebuilt, refinished and dropped into a new production Civilian Marksmanship Program (CMP) stock. The bore is not the brightest we have seen but the rifle’s action uses all Springfield parts. This is a good looking M1 Garand to add to your WWII collection.