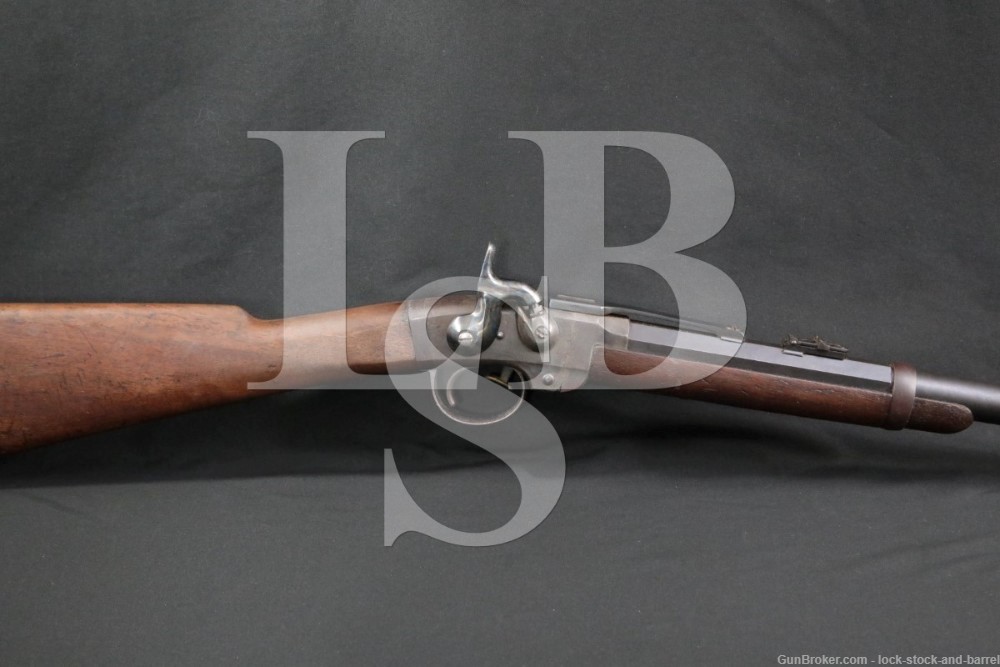 Stock Configuration & Condition/ Grip: The stocks are two-piece wood featuring a forend secured by a barrel band, a straight wrist, straight comb and metal butt-plate. The left side of the receiver has a sling bar with a fixed saddle ring. The stocks have scattered light handling marks, compressions, nicks and scuffs. The LOP is 14.5” from the trigger to the rear end of the butt-plate. The butt-plate is coated in moderate surface oxidation and it has light handling marks.  Overall, the Antique stocks are in Very Good condition.

Finish Originality: Original with the exception of the hammer which appears to be a replacement part.

Bore Condition: The bore is mostly-bright with sharp rifling. There is some light erosion in the bore.

Overall Condition: The carbine retains 65% of its metal finish. The barrel still retains the majority of its bluing although it is coated in light surface oxidation. The frame has some trace case coloring concentrated around the sling bar. The gun has taken a patina color from the oxidation which is scattered on its metal surfaces. Also, the brass barrel release latch is tarnished and coated in verdigris. There are scattered light-moderate handling marks, nicks and scuffs. Notably, there is some light wear around the muzzle. The markings remain clear. The screwheads have tool-marks but they remain serviceable. Overall, the carbine is in Very Good-Fine condition for an Antique.

Mechanics: The nipple has some wear. Otherwise, the action functions correctly. A percussion cap is needed to fire the carbine. To load the gun, first the hammer has to be cocked, afterwards  a barrel release latch is depressed (located directly in front of the trigger) to expose the breech and the user can load a cartridge before closing the barrel and depressing the trigger to engage the action. We have not fired this rifle. As with all previously owned firearms, a thorough cleaning may be necessary to meet your maintenance standards.

Our Assessment: This is an American Machine Works manufactured Smith Carbine that was manufactured during the Civil War. The Smith Carbine was developed by Gilbert Smith who submitted his design to the government in the 1850s. When the Civil War broke out in 1861, the government quickly placed orders for Smith’s design. By the end of the war approximately 31,000 of the Smith Carbines had been manufactured and with almost all of the carbines purchased by the U.S. Government. During the early phases of the Civil War Confederate forces managed to capture a number of Smith Carbines as well, but they had to primarily rely upon captured stocks which was not a sustainable method of arms acquisition. The production was safely nestled in the North, well out of reach for Confederate forces. The Smith Carbines were specifically designed for use by cavalry and were issued to a number of Union mounted formations. The Smith Carbine was an efficient design for its time and proved a handy companion to the soldiers who carried it into battle.

The Smith Carbine’s manufacture was contracted out to three companies: American Machine Works (which made this specimen), Massachusetts Arms Co. and American Arms Co. all based in Massachusetts. A number of surplus guns were later sold on the commercial market after the war ended.
This specimen is beautifully preserved retaining an impressive amount of its original finish and it remains mechanically sound. The one notable issue with the gun is the hammer, it is not original to the carbine. The markings are almost all clear and the cartouche on the wrist is still sharp. This is a Civil War-era weapon system that will appeal to collectors of historical firearms. Good luck on your bid!