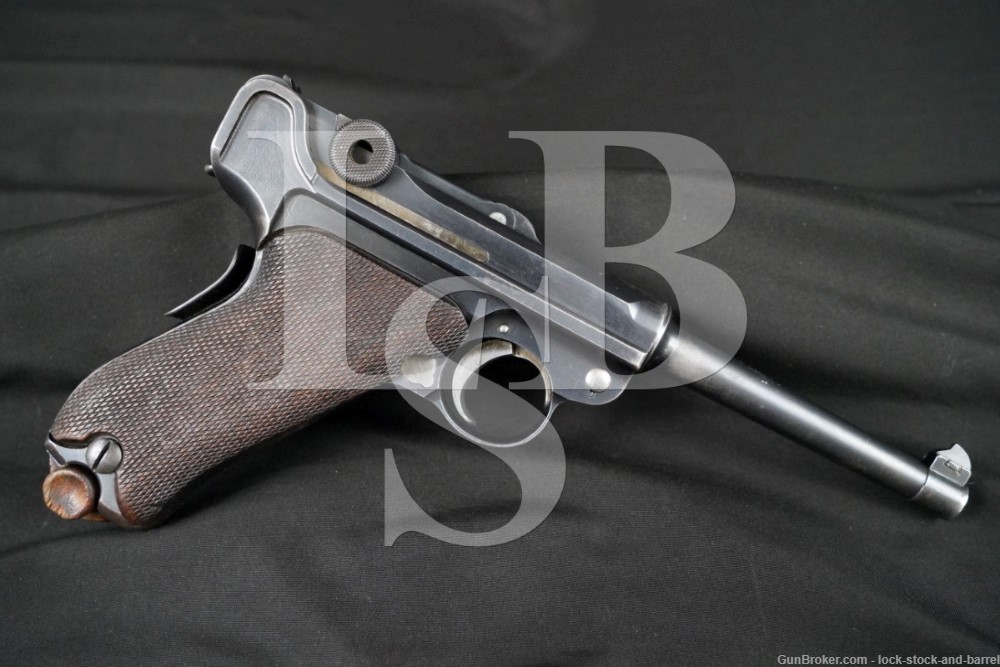 Sights / Optics: The front sight is serrated blade fixed to a banded base fixed to the muzzle. The rear sight is a “V”-notch integral to the rear toggle link.

Stock Configuration & Condition: The grip panels are two-piece checkered wood. The grips have moderate handling marks, nicks and scuffs. Notably, there is a scratch at the top of the left panel, above the magazine release, plus the left panel has a few compressions and scuffs including a small ding on the rear end of the panel, under the grip safety. The bottom front portion of the right panel has a small nick. The several patches of the checkering have worn off the left panel, but the checkering is still mostly sharp. There are no chips or cracks. Overall, the grip panels are in Good condition.

Bore Condition: The bore is grey with mostly sharp rifling. There is light erosion concentrated in the grooves.

Overall Condition: This pistol retains about 75% of its metal finish. There are some light-moderate handling marks, nicks and scuffs. Notably, there is finish loss along the leading edges, a few scattered patches of finish loss and some light surface oxidation concentrated on the grip straps. The original German proof and assembly marks are faded but the rest remain clear. The screwheads have light tool-marks, but they remain serviceable. Overall, the pistol is in Very Good condition.

Mechanics: The action works correctly. The slide to frame fit is snug. We have not fired this pistol. As with all previously owned firearms, a thorough cleaning may be necessary to meet your maintenance standards.

Box, Paperwork & Accessories: The pistol comes with a single magazine that has a wood base. The magazine has some light handling marks and is coated in light surface oxidation. Overall, the magazine is in Fine condition.

Our Assessment: The Parabellum-Pistole, commonly referred to as the Luger, was designed by Georg Johann Luger. Luger was an unlikely gun designer, born in 1849 he was the son of a surgeon, Bartholomaeus von Luger, and while attending university he served as a One-Year Volunteer with the 78th Infantry Regiment (Infanterieregiment 78 ein) of the Austro-Hungarian Army. While in the military Luger proved himself a skilled marksman and he began to develop an interest in the small arms technology. Following four years of service Luger worked a number of jobs in Vienna. Finally, in the 1870s Luger met Ferdinand Ritter von Mannlicher who recruited him as a sales representative for Deutsche Waffen und Munitionsfabrik AG (DWM). One of the company’s weapons that Luger marketed was the Borchardt C93 (named after its designer Hugo Borchardt) which was criticized for being too heavy and poorly balanced. Luger decided to rework the design and eventually secured a contract for his new pistol with the Swiss Army which dubbed it the Model 1900 which was chambered for 7.65mm Parabellum cartridges. After some minor reworking Luger introduced the Pistole 1904, chambered for 9mm cartridges, which was adopted by the Imperial German Navy, the pistol was henceforth referred to as the Luger. A slightly altered version of the pistol with a smaller barrel was adopted for service by the Prussian Army in 1908, hence the designation P08. The P08 would become one of the most iconic weapons of the 20th century. Following the end of WWI Luger was bankrupted, he had invested in War Bonds which had become worthless following Imperial Germany’s defeat and worse yet he was forced out of his job by his employer DWM which sought to appropriate his patents. The ensuing legal dispute between Luger and DWM would be decided in his favor in 1922, but he was financially ruined by that time and passed away the following year at the age of 74. His pistol would continue to serve the German military during WWII (although the P38 was the Wehrmacht’s standard issue sidearm) and saw service in a number military and police forces after the war.

This pistol is a Luger Model 1900 made for export to the United States (it is a commercial variant). The story of this pistol is tied to Hans Tauscher who served as a sales representative for DWM in the United States prior to WWI, he helped market the parabellum-pistol on the American Commercial market. He is credited with naming the pistol the “Luger”, and distributing it across the United States. Tauscher would shuttle between Germany and the United States, and returned to the US when WWI broke out. He was tried for espionage during WWI, in 1916 he was accused of assisting a plot to blow up a target in Canada and put on trial, but he was acquitted by a Federal Jury and remained in the U.S. until his death in 1941. This is one of the Lugers that was distributed by DWM on the American market in the early 1900s. The grips appear to be aftermarket and the magazine may not be original, but otherwise the gun’s components are serial matched to the arsenal refurbishment performed by DWM before exporting the gun to the United States (this gun was initially assembled to German specifications evidenced by the surviving Imperial German proof and assembly marks). The gun’s chamber ring features the Great Seal of the United States (an eagle) which was applied to most of the commercial lugers manufactured prior to WWI. The gun has only light handling wear considering its age (it is well over 110 years old), and it remains both ergonomic and mechanically sound. The gun retains all the characteristics of the Model 1900, it is quite an impressive and rare pistol. Good luck on your bid!