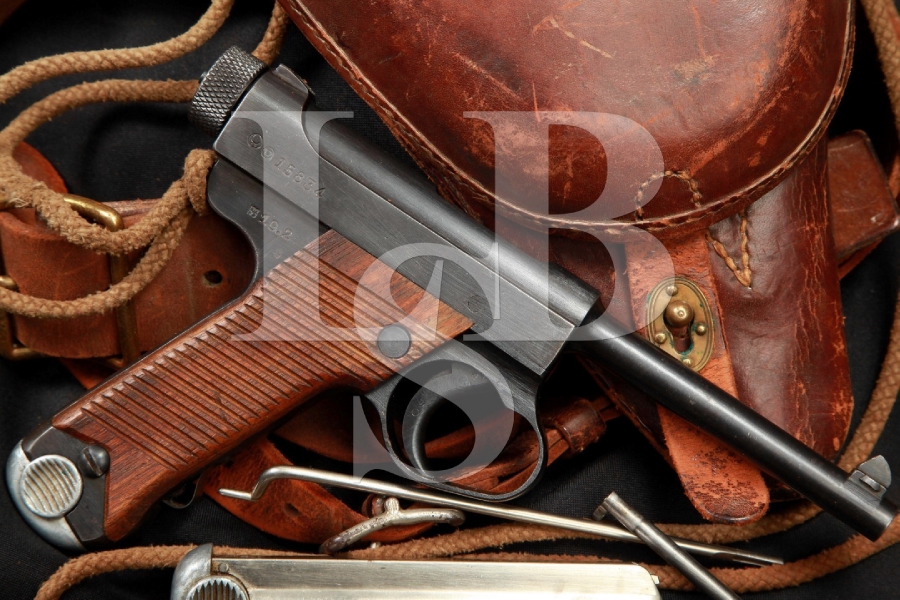 Sights / Optics: The front sight is a blade dovetail set to a slightly raised base on the barrel which appears as an inverted “V” when viewed from the rear. The rear sight is a square notch milled into the back of the barrel.

Finish Originality: The finish is original. There are light sanding marks under the finish from lack of polishing before bluing which is typical of war finishes.

Overall Condition: This handgun retains about 97% of its metal finish. There is thinning on front edge of the barrel, the top of the front sight, the edges of the safety and magazine release, along with the front and back edges of the frame. There are a few light marks in the barrel and a few light compression marks in the left side of the frame above the trigger. There are two scratches through the finish from the safety, two light compression marks at the left rear of the frame, a small mark on the right rear of the frame, a small mark near the bottom of the backstrap, and a mark through the finish in the front strap. The knurling on the cocking knob shows very light wear, the safety serrations are sharp and the checkering on the magazine release shows moderate wear on its outside edge. The grip screws are distressed. The markings are clear and with definite raised edges around the date. Overall, this handgun rates in about Excellent condition.

Mechanics: The action functions correctly. The receiver appears tight to the frame. We did not fire this handgun.

Box, Paperwork & Accessories: There is a lanyard ring on the back of the frame below the cocking knob with an olive drab cotton lanyard attached. The circumference of the lanyard is about 81” and the two ends are held together with a leather splice sewn to the lanyard. The lanyard shows very light discoloring from dirt and age, along with an area about 2” long where the cotton is abraded. Overall, the lanyard is in about Very Good condition. This pistol comes with a total of two 8-round magazines, a JMCH Type III (http://members.shaw.ca/tju/t14accessories.htm) leather hard shell holster with both belt and harness, a cleaning rod and an extra firing pin. . The early type magazines are nickel plated with aluminum bottom pieces. The magazine in the pistol shows minimal wear with a deep compression mark in the bottom of the bottom piece and another on the left gripping ring. The lower back surface of the magazine is marked “311”, and with a Japanese character. It is in about Very Good condition. The spare magazine shows minor wear with tiny marks and shallow compression marks on the front edge of the bottom piece. The bottom rear of the magazine is marked “200” and with a Japanese character. It is in about Fine condition. The holster is a clamshell type made of brown leather and the inside of the clamshell is marked with what appears to be the Japanese character “Nam” for Nambu. The hinge for the clamshell top is made of leather, as is the strap on the bottom edge of the clamshell that secures it to the front of the holster via a brass stud near the muzzle using a brass slotted plate on the strap. The front of the holster has an ammo pouch sewn to it with its own flap covering, secured with a stud at the bottom of the pouch. On the leading edge of the pouch (or right side of the pouch as you are viewing the holster) is sewn a small pouch for a spare striker (firing pin) which is provided. The back of the holster has a wide belt loop in the center with a strap on each side with square brass rings for attaching to a shoulder harness (both belt and harness are included.) The inside of the holster has a leather piece near the bottom for helping to secure the barrel and keep it separate from the rear where the spare magazine is stored. There is a small loop at the rear inside edge for a cleaning rod, which is provided. The holster has all of the stitching intact. There are no cracks in the hinge, but there is finish loss along its outside surface and finish loss on the strap securing the top flap to the holster. There are numerous dings and light scrapes in the finish, with a deeper scrape on the back side in front of the belt loop. This holster is in about Very Good to Fine condition. The cleaning rod has a slotted tip for a patch and a small right angle bend at the top for a handle. It appears to be nickel plated and is in Excellent condition. The firing pin appears unused and has a small Japanese character on either side of its lug. It is in Excellent condition. The belt is about 1 ¾” wide and 40” long, and has holes to accommodate waists between 24” and 37” in circumference. The belt has a brass buckle, two leather sliders and a slider with a metal buckle and hook for attaching accessories. The belt shows oil staining in spots and finish loss. It is in about Fine condition. The harness is about 1” wide and attached at one end with a steel stud through a slot in the leather and with a nickel plated steel buckle at the other. The buckle shows surface loss with erosion. the belt shows finish loss over its entire length. The harness is in about Very Good condition.

Our Assessment: This is a VERY NICE looking Nambu Type 14 pistol. It was made by the Toriimatsu branch of the Nagoya arsenal in February 1944 (Second Series.) The Type 14 was built from 1925 to 1945 for the armed forces, and almost all of the Japanese pistols and revolvers used unique cartridges. The 8mm Nambu is a bottleneck cartridge that pushes a 102 grain bullet at a little over 900 fps. and has approximately the same power as a .380 ACP cartridge. This pistol has about 97% of its original finish remaining with thinning on its edges and with a few handling marks. It is in Excellent condition with a bore that is still bright with sharp rifling. The pistol is complete with a period Type II leather clamshell holster with belt and shoulder harness, spare magazine, spare firing pin (striker) and cleaning rod. This is a fantastic find for a collector of WWII or Japanese weapons – it’s not very often you find a Nambu with original finish in such good condition and the early war leather holsters are even scarcer when they include cleaning rod, extra striker, belt and shoulder harness. But wait, it gets better!! The frame, bolt, cocking knob, and wooden grip panels are all marked with the same serial number. We expect collectors of WWII and Japanese weaponry to be very excited about this pistol and its accessories.