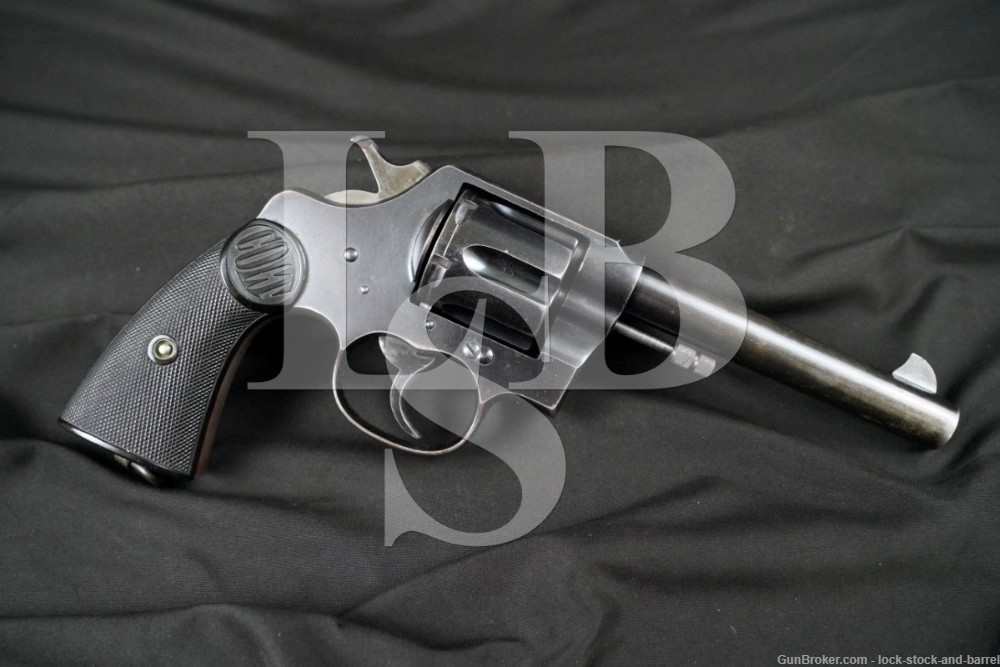 Sights / Optics: The front sight is a blade fixed to the front of the barrel. The rear sight is a “U”-notch at the rear of the topstrap.

Stock Configuration & Condition: The grips are two-piece checkered black hard rubber panels with “COLT” in oval at their tops. The grips have some scattered minor nicks and scuffs. The right panel has a tiny loss at the bottom-rear corner. The checkering is well defined. There are no cracks. Overall, the grips are in about Very Good condition.

Bore Condition: The bore is mostly bright with sharp rifling. There is no erosion in the bore, but there are some spots of stubborn leading, mostly in front of the forcing cone and on the lands.

Overall Condition: This handgun retains about 75% of its metal finish. The finish is thinning at all edges. There are scattered minor nicks, scuffs, scratches and spots of very minor surface oxidation. There is wear along each side of the barrel with a scrape and a couple of more notable nicks above the markings on the left side, these worn areas show treatment with cold blue. There is some odd discoloration around and below the cylinder latch, likely indicating that the sideplate has been touched up, as well. The grip areas show handling wear which has discolored from oxidation. The controls show handling wear. The action shows operational wear including a turn-line on the cylinder. The screw heads are tool marked with strong slots. The markings are generally clear, the inspection mark on the trigger guard is incomplete as noted. Overall, this revolver is in about Very Good condition.

Mechanics: The action functions correctly. The cylinder lockup has no play with the trigger depressed. The double action trigger is smooth, the single action trigger pull is crisp. We did not fire this handgun. As with all used firearms, a thorough cleaning may be necessary to meet your maintenance standards.

Our Assessment: The New Service revolver entered production in 1897 and was the first Colt double action revolver with a cylinder rotation to the right. The New Service was available in various calibers, but when the Army decided to adopt it in 1909, they were looking for a man-stopper to replace their New DA Army revolvers that gained such a poor reputation in the Spanish American and Philippine-American wars. The result was the .45 Colt chambered Model 1909. After the Army switched to the Model 1911 semi-auto, they wanted revolvers in the same caliber for WWI, and the Model 1917 New Service was adopted, chambered in .45 A.C.P. This example is a commercial revolver made in 1918 chambered for .45 Colt. It has a lot of its original finish remaining, though some worn areas have been treated with cold blue, and retains a strong bore and good mechanics. This robust revolver is chambered for a potent cartridge, and would serve its new owner well as a shooter. It will also make a nice addition to a Colt collection as an example of a wartime-commercial New Service. Good luck and happy bidding!