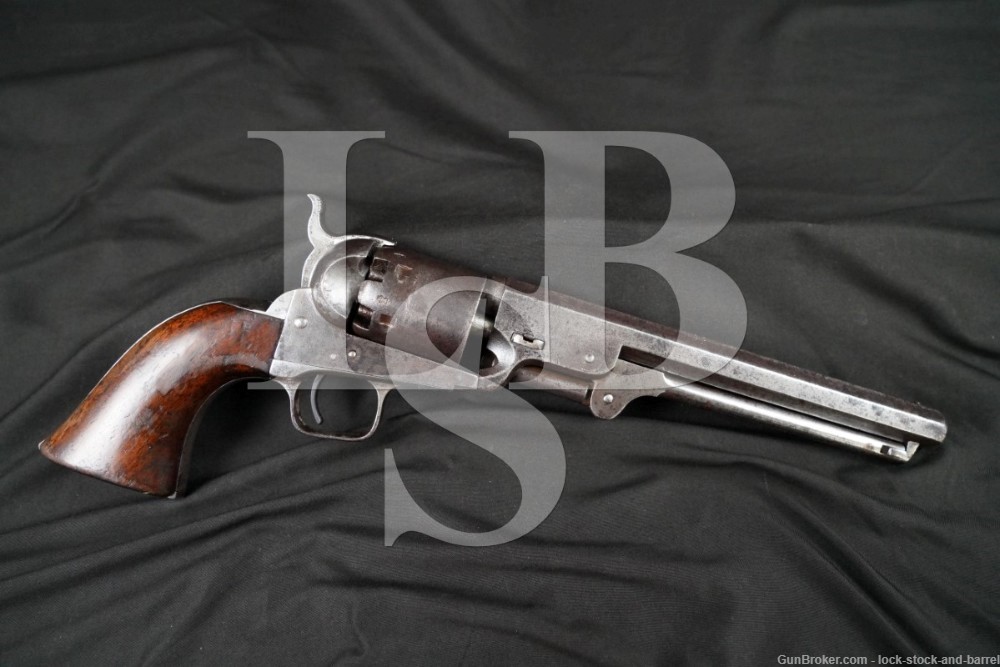 Markings: The top of the barrel is marked “ADDRESS COL. COLT. LONDON” with dashes (not arrows) to each side. The left of the frame is marked “COLT’S / PATENT”. The bottom of the barrel assembly, frame, trigger guard, backstrap, wedge, as well as the top of the loading lever are each marked “37791”. The arbor does not have a visible serial marking, appearing to have worn off. The outside of the cylinder has remains of a roll-engraved naval scene and “?????? 37791″ with no evidence of a W.L.Ormsby marking. The backstrap inlet of the grip has “7791” hand-written. The left of the trigger guard has “U” inspector’s mark. The left of the barrel assembly has one British proofs and there are British proofs on the outside of the cylinder between each nipple.

Sights / Optics: The front sight is a brass post threaded to the barrel at the muzzle, worn down to a num. The rear sight is a “V” notch at the front of the hammer, visible when cocked.

Stock Configuration & Condition: The grip is one-piece smooth walnut of the later Hartford type, thicker and with a less radical upward cant to the bottom flats than earlier “Slim Jim” grips. The grip has light handling wear with scattered light nicks, scuffs and scratches. There are some more notable marks on the bottom face, most lining up with matching marks on the butt of the backstrap. There are no cracks. Overall, the grip is in Very Good-Fine condition as Antique.

Bore Condition: The bore is gray with well defined rifling. There is light-moderate erosion and light pitting scattered through the bore.

Overall Condition: This revolver retains about 5% of its metal finish. Exposed surfaces show very little finish with some areas, most notably the grip frame, appearing to have been intentionally polished bright. There is some finish in well protected areas such as the bottom-rear of the barrel above the loading lever and the portions of the grip frame covered by the grip. Exposed surfaces range from bright to a moderate patina with scattered light surface erosion. There is some more notable erosion around the nipples, on the front face of the cylinder and the rear face of the barrel. There are several scattered nicks, scuffs and scratches including notable wear at the cylinder stop notches and more notable nicks on the butt which match up to those on the grip. There are tool marks around some screw heads. The screw heads range from sharp to tool marked with strong slots. The markings are generally clear with some inspector’s marks worn and incomplete. If there was a serial marking on the cylinder arbor, it has worn away. Overall, this revolver is in Good condition as Antique (see Mechanics)

Mechanics: The hammer barely catches at half-cock and pulling the trigger will drop the hammer from half-cock. The timing is correct, but the cylinder can be pushed out of lock on five of the six chambers without too much effort. Otherwise, the action functions correctly. The barrel has no play to the frame. We have not fired this revolver. As with all used firearms, a thorough cleaning may be necessary to meet your maintenance standards.

Our Assessment: The Colt 1851 Navy revolver was produced by Colt up until 1873 when Colt cartridge revolvers were introduced. It got its name from the Navy battle scene on the cylinder that Colt added to commemorate the victory of the Second Texas Navy at the Battle of Campeche in 1843. The 1851 was also part of Colt’s plan to expand sales overseas. Samuel Colt himself took several hundred revolvers with him to the Great Exhibition at the Crystal Palace in London. He would go on to extol the virtues of his interchangeable parts and assembly-line manufacturing process. In an effort to make it more cost-effective, and less tax-intensive, to sell his revolvers in England, he would establish Colt’s London Armory which would produce 1851 revolvers from 1853 until 1857.

The earliest examples, known as “Early Londons”, were assembled from parts produced in Hartford. This allowed fitters and finishers to be trained more quickly as they did not need to wait for the London factory to actually begin producing parts. The middle production guns were all London-made, known as “London-Londons”. The latest guns, such as this example, are known as a “Hartford-Londons” among collectors, with a mix of parts produced in Hartford and at the London Armory. There is some speculation as to the reason for this, perhaps mostly likely because Colt didn’t believe that they would see long-term success in the English market, so they wound down London production while still assembling and selling the guns as “English” made revolvers.

These models have a mix of features, and this one has a particularly early serial number for a Hartford-London. It is likely that some screws have been replaced, but several have the domed-heads of the London made screws. The Colt’s London barrel address has the same text as the London-made barrels, but has straight dashes to each side rather than arrows, indicative of a Hartford-made barrel for the London factory. The barrel and cylinder have British proof marks, with no W.L.Ormsby marking on the cylinder naval scene (this work was not protected under English law). As one of the earliest Hartford-London, it also has London-style iron trigger guard and backstrap, with a distinctive flat-bottom profile to the guard and slot milled in the top of the backstrap behind the hammer.

This example shows its age, but retains matching serialized parts including the grip, though the cylinder arbor’s serial marking is missing. The scarcity of this revolver is enhanced by the fact that there are certainly fewer in America today than were originally produced for the London market, and possibly fewer than remained in Europe. This example would make a great addition to a Colt collection, especially if it is focused on Colt’s Model 1851 variations. Please see our photos and good luck!