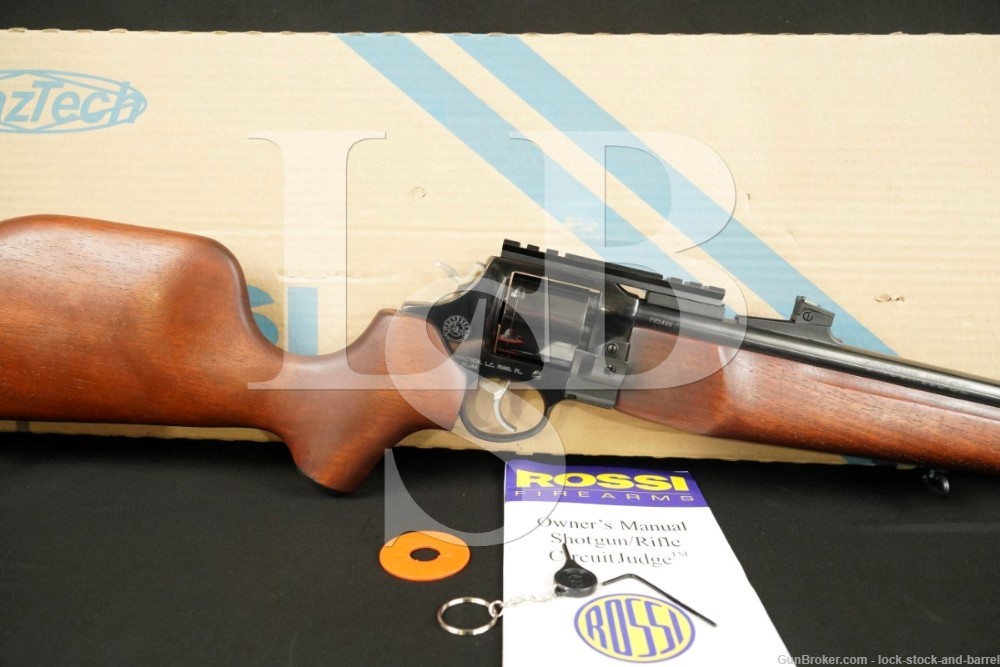 Year of Manufacture: Circa 2013

Action Type: Single and Double Action Carbine Revolver with a Swing Out Cylinder

Stock Configuration & Condition/ Grip: The stocks are two-piece smooth wood featuring a forend which has a fixed sling swivel on the bottom, a semi-pistol grip with “ROSSI” marked black synthetic cap, a Monte Carlo style comb and black rubber butt-pad. The stocks have some light handling and storage marks, but they lack any notable defects. There are no chips or cracks. The LOP is 14.5” from the trigger to the rear end of the butt-pad. Overall, the stocks are in Fine-Excellent condition.

Overall Condition: The gun retains 97% of its metal finish. There are some light handling marks on the gun’s metal surfaces, including a turnline on the cylinder, but it lacks any notable defects. The markings remain clear. The screwheads have light tool-marks but they remain serviceable. Overall, the gun is in Fine condition.

Mechanics: The action functions correctly. The single action trigger is crisp and the double action is smooth. The cylinder locks with only barely perceptible play on each chamber. We did not fire this pistol. As with all previously owned firearms, a thorough cleaning may be necessary to meet your maintenance standards.

Box Paperwork and Accessories: The gun comes with its serial matched box and a cleaning brush head. Also included is a user mauual, wrench and saftey devices.

Our Assessment: This is a Taurus Circuit Judge which is a single/double-action revolver carbine chambered for .44 Magnum cartridges. The gun is a carbine variant of the Taurus Judge which is a double-action revolver which has been in production since 2006, the Judge was designed to fire shot-shells and the handgun is banned by California State Law, despite this the Circuit Judge is designed as a long-gun and is perfectly legal to own in the State. Unlike old 19th century revolver carbines and rifles, the Circuit Judge has a small blast shield attached to the cylinder in order to protect users from hot gasses escaping between the cylinder and barrel. If you are wondering why the gun has Rossi marked parts, it should be noted that Taurus controls the company’s revolver and handgun production and Rossi is imported into the U.S. through Braztech which is owned by Taurus. This is a beautifully crafted revolver carbine that should prove a worthy addition to any collection. Good luck on your bid!