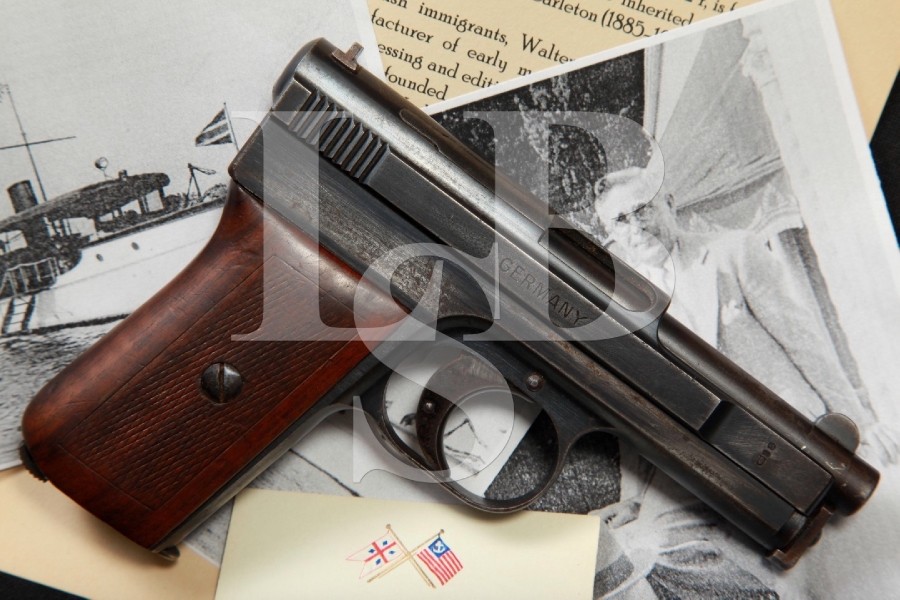 Sights / Optics: The front sight is a tall half-round blade with an inverted “V” shape when viewed from the rear that is fixed to the barrel. The rear sight is a “V” notch leaf dovetail to the slide. It is unique to see an open front design with the front sight on the barrel instead of on the slide, as is common with Beretta Model 92’s.

Stock Configuration & Condition: The one piece grip is checkered walnut. The grip faces exhibit a few shallow handling marks with a few light marks on the backstrap. The checkering is worn almost smooth and a small chip is present at the right screw escutcheon. The grip rates in about Good to Very Good overall condition.

Bore Condition: The bore is gray and the rifling is dull and shallow. There is erosion in the bore.

Overall Condition: This handgun retains about 55% of its metal finish. Surface thinning is present on the slide, frame and grip frame, down to bare metal on about 30% of the surface. Spots of solid surface erosion can be seen on the left side of the frame and slide, while pinprick erosion is visible on the right side of the slide. The markings are clear. Overall, this handgun rates in about Good condition.

Box, Paperwork & Accessories: This pistol comes with one 9-round magazine, which exhibit marks from use and is in Very Good condition. This pistol is also accompanied by a letter of authenticity which connects the pistol to Walter Eric Carleton, who was an innovator in the early motion picture industry and a reputed bootlegger. The letter is typed on a sheet of Carleton’s actual stationery which bears his emblem, consisting of two flags. The letter traces the providence of the pistol to Carleton via his maternal grandson. Also included is one of Carleton’s actual calling cards, two pictures of Carleton himself and two photographs of his boat “The Dolphin” on which he allegedly smuggled liquor from Florida to New York during prohibition. The paperwork is in Excellent condition.

Our Assessment: The Mauser Pocket Model 1910 Side Latch was the original version of the pistol which manufactured for 24 years beginning in 1910. This particular pistol is in Good condition and is mechanically sound, although the bore is in poor condition. The mechanics are strong and crisp however and the pistol shows only light wear and insignificant marks while retaining about 55% of its finish. It was well used and linked to Walter Eric Carleton, a reputed bootlegger and early motion picture pioneer. It is a fine little gun and may have very well been involved in some adventures during the 1920s.