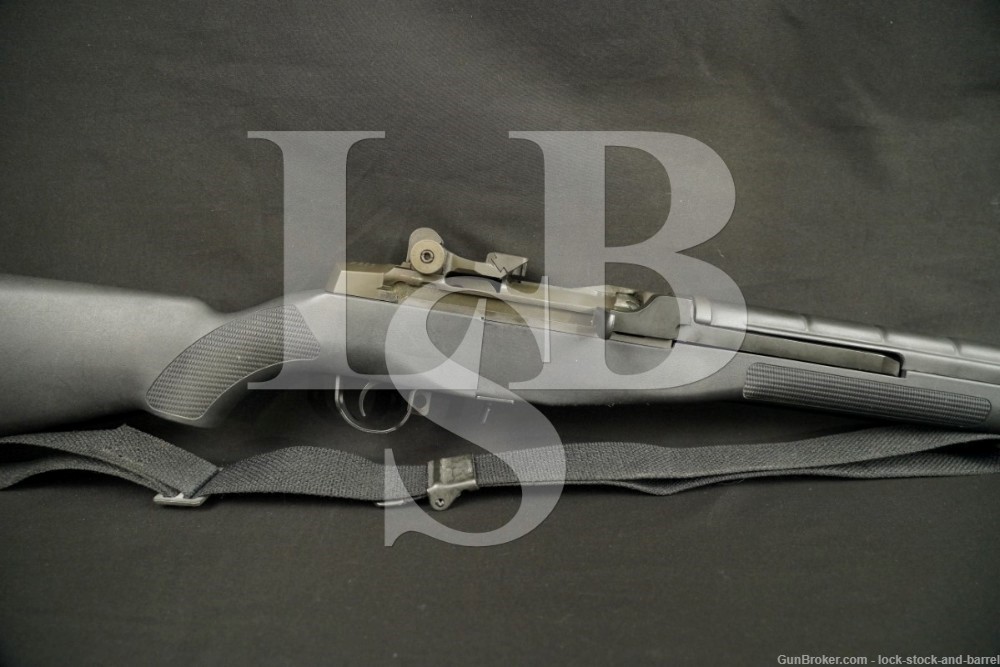 Year of Manufacture: This Model M1A Bush Rifle was discontinued in 1999.
It was later replaced by the M1A Scout Squad. The Scout Squad uses a handguard that has an opening for a barrel mounted scope rail.

Action Type: Semi Auto, Detachable Magazine.
There is NO magazine.

Barrel Length: Approximately 18 inches; 21 inches to the front of the muzzle break.

Stock Configuration & Condition: The black synthetic stock has a pistol grip, checkering on the grip & forearm, two sling loops and a metal buttplate with a flip up door and a second hinged door for storage in the butt. The stock has a fine texture to it. The stock shows several scuffs and light scrapes. The belly of the stock shows some small scratches. The magazine well shows several scrapes and small deep scratches. The LOP measures 13 1/4 inches from the front of the trigger to the back of the butt plate. The stock rates in about Very Good Plus overall condition.

Bore Condition: The lands are bright and the grooves are semi bright. The rifling is sharp & deep. There is fouling in the grooves which should clean up some. There is no erosion.

Overall Condition: This rifle retains about 98% of its metal finish. The metal shows scuffs and light handling marks. The top of the receiver shows several small light scrapes. The markings are deep. Overall, this rifle rates in about Very Good Plus to Fine condition.

Box, Paperwork & Accessories: There is NO magazine.
The rilfe comes with a black nylon sling.

Our Assessment: The M1A Bush Rifle uses an 18 inch barrel. It is a shorter version of the Standard M1A Rifle which uses a 22 inch barrel. This variation of the  Springfield M1A Bush Rifle was discontinued in 1999. It was later replaced by the M1A Scout Squad. The Scout Squad differs in that it uses a handguard that has an opening for the forward mounted scope rail.
This M1A Bush Rifle has a muzzle brake installed so it is legal in California. The rifle looks good and has a strong bore. It should keep its new owner smiling out the range. Good luck.