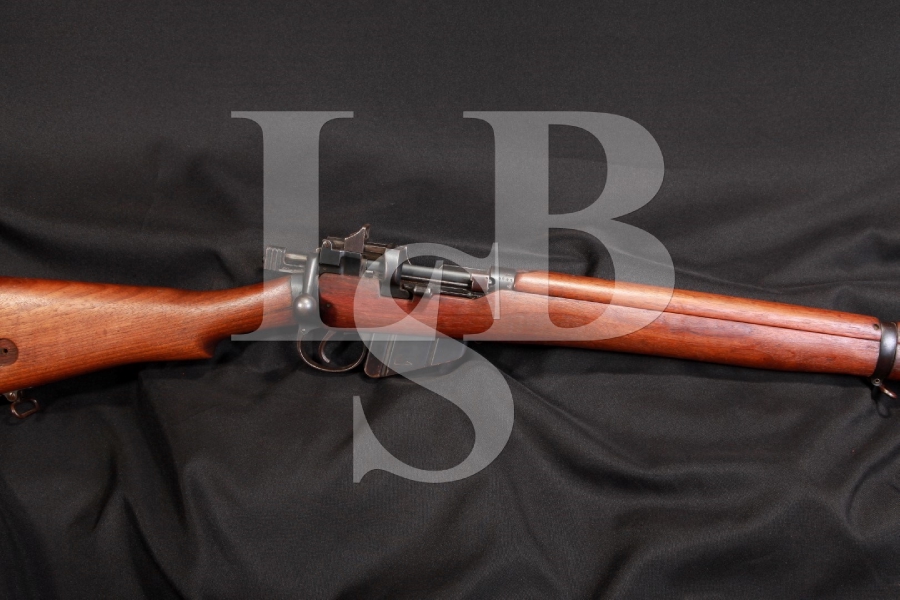 Action Type: This is a bolt action rifle with a removable magazine. It can also be fed by stripper clips and fired single-shot without using cartridges from the magazine via a magazine cut-off on the right side of the receiver.

Sights / Optics: The front sight is a Patridge style blade dovetailed into a base on the barrel, protected by military style ears that are finely checkered on their edges. The rear sight is a folding ladder sight fixed to the rear of the receiver. When the ladder is folded down a tall rectangular frame is presented which has an aperture in the center. When the ladder is folded up, there is an aperture in the center of the slider, which has a spring loaded latch on the left side to allow it to be moved up and down and then locked into position. The rear face of the ladder is marked from “2” to “14” and the rear face of the slider is finely checkered to reduce glare.

Stock Configuration & Condition: The stocks are dark walnut with an oiled finish. They consist of a buttstock and a full length forend and handguard. The buttstock has a brass buttplate installed with a hinged cover over a hole in the stock for an oiler (not included). There is a sling swivel installed at the butt and on the rear forend/handguard band. There is a steel nose cap on the handguard and a large nose cap at the front of the forend which provides the base and ears for the front sight and a lug and round stud for a bayonet. There is also a second forend/handguard band just behind the large nose cap (a key feature of the MK V, along with the rear sight). There is a hole for a marking disk on the right side of the buttstock, but the disk is absent. There is a surface crack on the right side of the wrist at the collar and oil staining around the stock collar and forend/handguard bands. The left side of the forend shows a compression mark above the trigger, above the magazine well, at the chamber ring, and several along its top edge. The right side of the forend shows a few compression marks along its top edge between the receiver and the rear forend/handguard band. There is a shallow compression mark in the top of the handguard between its nose cap and the front forend/handguard band and another just behind the band. Otherwise, there just a few dark spots scattered around from old bruises. The LOP measures 12 ¾” from the front of the trigger to the back of the buttplate, which shows numerous tiny handling marks and dark mustard colored patina. The buttplate is in about Very Good condition. The wood to metal fit is good. The stocks rate in about Fine overall condition.

Type of Finish: The finish on most of the parts is a thick matte black phosphate finish. The handguard nose cap and the magazine cut-off are blued. The cocking piece has been “stoved” with a black semi-gloss paint.

Finish Originality: The rifle appears to have been arsenal refinished (The handguard nose cap and magazine cut-off have their original blued finish.) There are very light scratches under the finish of the forend/handguard bands and the nose cap.

Overall Condition: This rifle retains about 90% of its current metal finish. The edges of the nose cap show thinning and the checkering on the front sight ears shows moderate wear. The nose cap also shows a few light marks. The nose cap and forend/handguard bands show some light pitting with deeper pitting on the stock collar and a large pit at the front edge of the rear band. The safety, magazine cut-off, bolt head, charger ears, bolt knob and the edges of the trigger guard show thinning. Most of the “stoving” finish has worn off the cocking knob. The top edge of the rear sight shows several compression marks. The screw heads on the barrel bands and the trigger guard/collar screw are disfigured, while the rest are sharp. The markings are mostly clear, but there are a few in the wood and in the metal that are unclear, and one or two marks have been ground or sanded off (“FD” instead of “EFD”, etc.). Overall, this rifle rates in about Fine condition as refinished.

Mechanics: The action functions correctly. This rifle is equipped with a magazine cut-off on the right side of the receiver to allow the loading of single rounds with a full magazine. The bolt is removed by pulling it back all the way and then simply lifting up on the bolt head. We have not fired this rifle.

Box, Paperwork & Accessories: A 10-round magazine with a matte black phosphate finish is included with the rifle. The follower is marked “3” and with a “Downward Pointing Arrow / EFD / 97”. The back of the magazine is marked “EFD / 61”, a “Downward Pointing Arrow / FD / ?9”, “143” and “4”. The magazine has been refinished. There is a shallow dent on the left side towards the bottom and two shallow dents and a small compression mark in the floorplate. The magazine shows a few marks through the finish and a light sprinkling of surface frosting. The magazine is in about Very Good condition.

Our Assessment: The Lee-Enfield bolt-action, magazine-fed, repeating rifle was the main firearm used by the military forces of the British Empire and Commonwealth during the first half of the 20th century. It was the British Army’s standard rifle from its official adoption in 1895 until 1957. During the First World War, the standard SMLE (Short Rifle, Magazine Fed Lee Enfield) Mk III was found to be too complicated to manufacture, costing £3/15/ and demand was outstripping supply, so in late 1915 the Mk III* was introduced, which incorporated several changes, including deletion of the magazine cut-off and the windage adjustment of the rear sight. From http://www.telusplanet.net/public/philqgbr/enfields.html#2: “After WWI, the need to produce rifles as fast as possible had gone away and there was not a lot of serious development. Production at some factories returned to a modified Mk III standard. Other improvements were made to the Mk III and Mk III* rifles in 1922, resulting in the Mk V rifle, only 20000 of which were ever made. The barrel mounted volley sights were removed and a folding ladder aperture sight was fitted on the receiver behind the charger bridge. This improved accuracy as the sight radius was greatly increased. A 2nd barrel band was added just behind the nose cap for added strength when using a bayonet, and the magazine cut off was reinstated. Further development in 1924 saw a variety of trial rifles and a small quantity of the Mk VI was produced in 1930-33.”. This SMLE MK V is in about Fine condition. The rifle appears to have been arsenal refinished with a black phosphate finish. The serial number on the receiver, bolt handle, forend and nose cap are matching. The wood is very clean with several shallow compression marks. The bore is bright with sharp rifling. This is a great find for the collector of British weapons from WWI and WWII. There weren’t that many of the Mk Vs made, and fewer yet survived WWII. No SMLE collection would ever be complete without one of these.