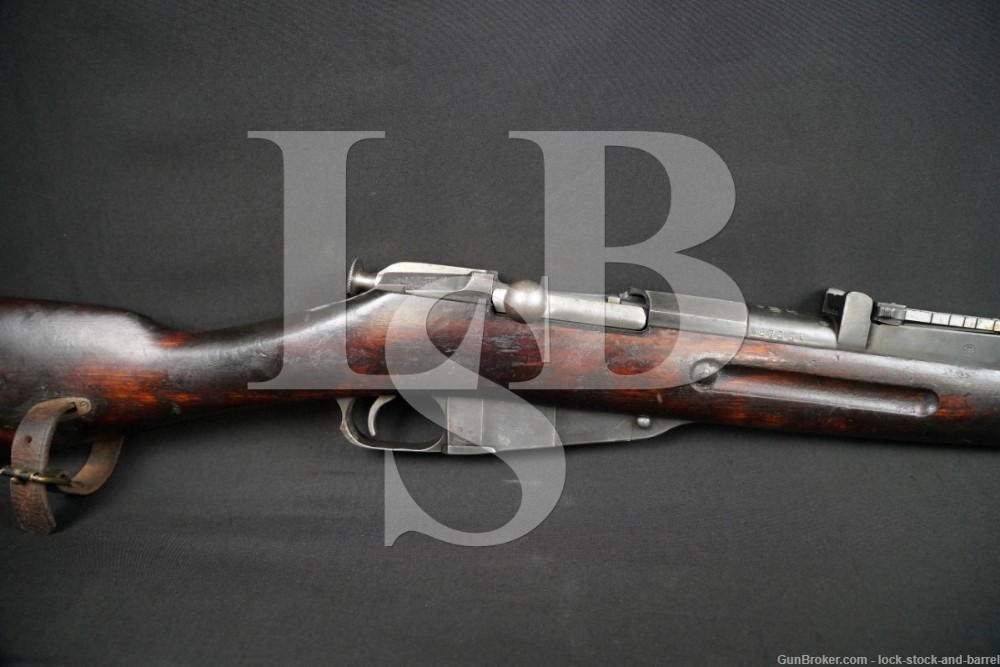 Stock Configuration & Condition/ Grip: The stocks are two-piece wood featuring a forend cap, a handguard, a slot in the forend for the included cleaning rod, a barrel band secured by a screw, finger grooves on the forend, a through bolt, a straight wrist, a slightly raised comb and metal butt-plate. There is a sling eyelet between the barrel band and forend cap in addition to an eyelet on the butt. The stocks have characteristic Finnish splice marks at the bottom of the forend. There are scattered light-moderate handling marks, nicks and scuffs. Notably, the toe has been patch repaired, there is a scrape on the left side of the forend adjacent to the receiver and a small patch of white paint on the bottom right portion of the forend ahead of the barrel band. The LOP is 13.75” from the trigger to the rear end of the butt-plate. The butt-plate’s finish has largely worn off and it is coated in cosmoline stains, has some light handling wear and light surface oxidation. Overall, the stocks are in Good condition.

Bore Condition: The bore is semi-bright with sharp rifling. There is erosion concentrated in the grooves.

Overall Condition: The rifle retains about 60% of its metal finish. The rifle has light-moderate handling marks, nicks and scuffs. Notably, there is finish loss along the leading edges. Also there are scattered light-moderate patches of surface oxidation, with some erosion on the front of the cleaning rod and forend cap. The markings remain clear. The screwheads have tool-marks but they remain serviceable. Overall, the rifle is in Good condition.

Box Paperwork and Accessories: The rifle comes with attached “dog collar” sling attachments fixed to the sling eyelets (please note, no sling is attached to the attachments and no sling is included with the rifle).

Our Assessment: This is a Sako manufactured Finnish Mosin m/28-30 bolt-action rifle chambered for 7.62x54R cartridges. The m/28-30 was made specifically for service with the Finnish Civil Guard, approximately 36,000 were manufactured between 1933-1940. The Civil Guard (also known as the White Guard) were a right-wing paramilitary organization that served alongside the country’s armed forces until it was disbanded in 1947, one of the provisions of the Finnish-Soviet peace Treaty penned after Finland’s defeat in WWII. Although the rifle has some handling wear consistent with a WWII-era weapon, it remains impressive. The rifle retains its distinct Civil Guard markings on the barrel shank and it remains mechanically sound. This is a great option for fans of Mosins and Historically relevant weapons. Good luck on your bid!