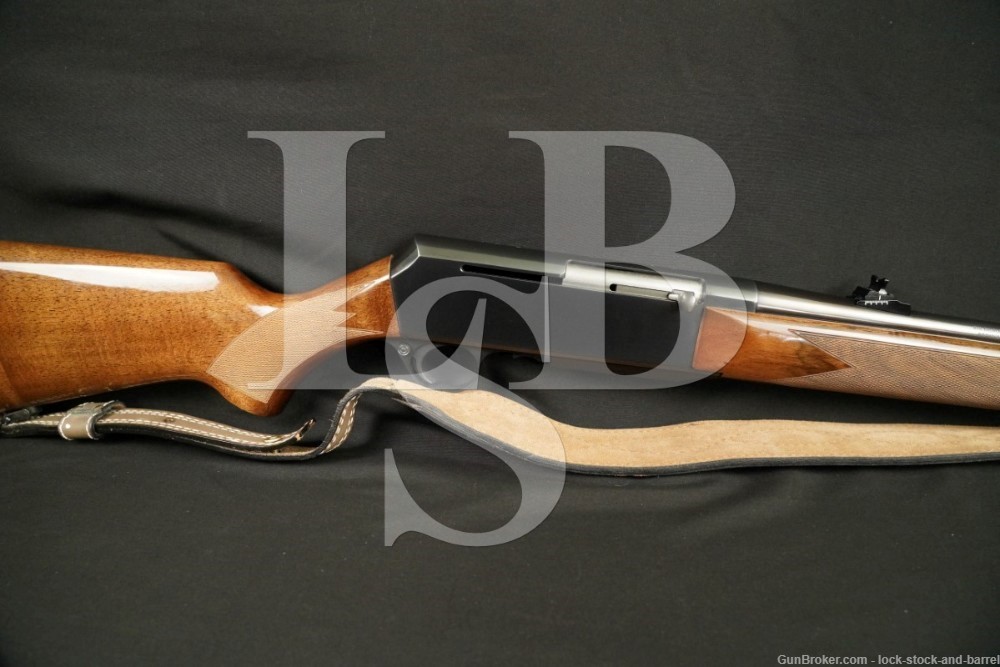 Make: Browning, Made by FN Belgium & Manufacture in Portugal

Action Type: Semi-Auto Rifle with 3 Round Box Magazine Clipped Into the Magazine Floorplate

Sights / Optics: The front sight is a hooded brass beaded blade dovetailed to a checkered, ramped base screwed to the front of the barrel. The rear sight is a Williams U-notch leaf on an elevation glider that is adjustable for windage. The base is screwed to the barrel. The top of the receiver is drilled, tapped, and filled in four places for mounting an optic (not included).

Stock Configuration & Condition: The stocks are two-piece checkered walnut with a pistol grip, straight comb, black synthetic Browning buttplate, and sling swivels front and rear with a leather sling marked “TOREL”. There are no rips or tears in the sling and the stitching is strong. The sling rates in about Fine-Excellent overall condition. The wood shows no major imperfections, just some light handling marks. The checkering is sharp. The LOP measures 13 3/7″ from the front of the trigger to the back of the buttpad, which shows some minor discoloration along the edges. Overall, the stocks are in about Excellent condition.

Bore Condition: The bore is bright with sharp rifling. There is no erosion in the bore, just some scattered minor fouling.

Overall Condition: This rifle retains about 97% of its metal finish. The barrel has taken a slight plum hue. There are some freckles of discoloration on the left side of the receiver. Otherwise, there are just a few faint handling marks and light operational wear. The markings are clear. Overall, this rifle is in about Fine-Excellent condition.

Box, Paperwork & Accessories: This rifle comes with a three-round magazine and the previously mentioned sling.

Our Assessment: The Browning BAR rifle was produced starting in 1967. This is an example from 1986 and it has a 22? barrel which has a bright bore and sharp rifling. The rifle looks to have seen little use in the field, retaining about 97% of its metal finish and strong mechanics. This semi-automatic rifle is chambered for 30-06. The 30-06 Springfield cartridge, called “30 Gov’t ’06” by Winchester, was introduced to the United States Army in 1906 and later standardized; it remained in use until the late 1970s. The “30” refers to the caliber of the bullet in inches. The “06” refers to the year the cartridge was adopted, 1906. Ballistically, the 30-06 is one of the most versatile cartridges ever designed. With “hot” handloads and a rifle capable of handling them, the 30-06 is capable of performance rivaling many magnum cartridges. However, when loaded more closely to the original government specs, 30-06 remains within the upper limit of felt recoil most shooters consider tolerable over multiple rounds, unlike the magnums, and is not unnecessarily destructive of meat on game such as deer. Please see our photos and good luck!