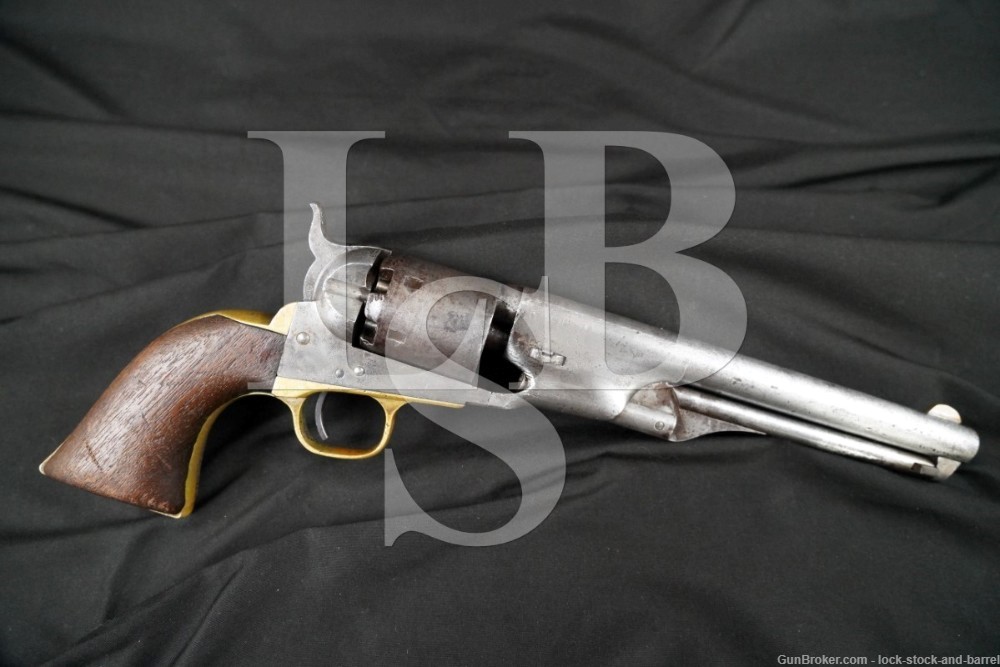 Sights / Optics: The front sight is a replacement copper blade fixed to the front of the barrel. The rear sight is a “V”-notch in the hammer spur, visible when cocked.

Stock Configuration & Condition: The grip is one-piece smooth walnut. The grip has scattered light nicks, scuffs and scratches. There is some more notable wear toward the bottom and more notable marks on the bottom face of the grip. The right side has a line of small, but deeper nicks toward the bottom-rear. There are no cracks. Overall, the grip is in Good-Very Good condition as Antique.

Finish Originality: Very little finish remains. The finish loss is even enough that it may have been intentionally removed. There is no evidence of a new finish being applied. The cylinder is not original to the gun.

Bore Condition: The bore is gray, the rifling is well defined. There is light-moderate erosion and pitting scattered through the bore.

Overall Condition: This revolver retains about 10% of its metal finish. Apart from the grip frame, most of the metal surfaces have worn or been polished bright, showing scattered discoloration from oxidation and some minor surface erosion. There are several scattered light-moderate nicks, dings, scuffs and scratches including tool marks on and around the wedge. There is a spot of more notable wear on the back of the cylinder between two of the nipples. The brass grip frame has a mustard patina with the crystalline appearance of old brass and scattered spots of more notable discoloration. The action shows operational wear. The nipples are in quite good condition and are likely replacements. The screw heads range from sharp to disfigured with useable slots. The markings range from clear to worn and incomplete. Overall, this revolver is in Good-plus condition as Antique.

Mechanics: The action functions correctly. The cylinder lockup has little side-to-side play and end-shake. The barrel assembly has no play to the frame. The trigger is crisp. The nipples are in good shape with clear flash-holes. We have not fired this revolver. As with all used firearms, a thorough cleaning may be necessary to meet your maintenance standards.

Our Assessment: The Colt 1861 Navy revolver was an update to the earlier 1851 model, incorporating the round barrel and creeping loading lever of the 1860 Army. In all respects, it is a great percussion revolver, but it saw limited production for a few reasons. Limited numbers were procured by the Government as there were already large purchases of the 1851 and 1860 models. After the Civil War, the civilian market was flooded with surplus weapons, limiting demand for new guns. Colt’s factory had a disastrous fire in 1864, and by then cartridge revolvers were starting to hit the market. For these reasons, despite the quality of the design, there were fewer than 40,000 produced between 1861 and 1873 when the model was discontinued. It would, however, have an influence on the Single Action Army, which had a simlar grip frame (though steel instead of brass) and would retain the 7 1/2″ barrel length for the Model 1873 adopted by the U.S. Army. This Model 1861 revolver certainly shows its age, and we only wish it could tell us its story. It will make a nice display piece with other Civil War era small arms as well as a good addition to a Colt collection with its limited production. Please see our photos and good luck!