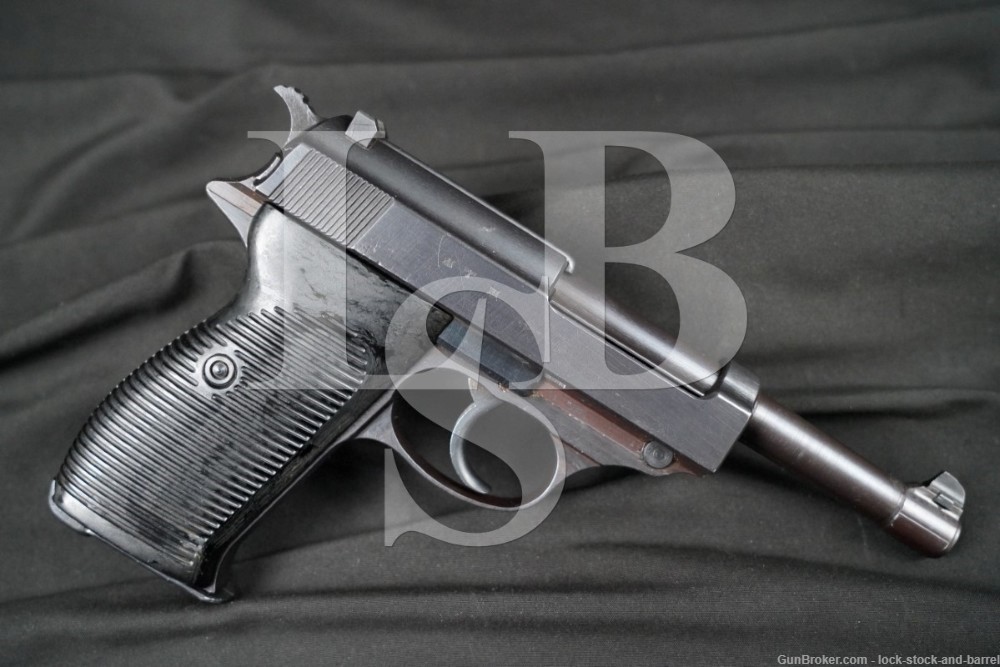 Action Type: Single or Double Action Semi-Auto fed by Removable Magazine (no magazine included). This pistol has a de-cocker safety.

Stock Configuration & Condition: The grips are AEG two-piece serrated black synthetic panels. The grips have scattered minor surface wear with a few light nicks, scuffs and scratches. The serrations are well defined. There are no chips or cracks. Overall, the grips are in Very Good-plus condition.

Overall Condition: This pistol retains about 98% of its current metal finish. There are some scattered nicks, scratches and minor erosion under the finish. There are only a few minor marks and light handling wear on the controls which is through the finish. The finish has a plum hue in some areas. The screw head is sharp. The markings range from clear to worn, but legible, to intentionally defaced. Overall, this pistol is in Fine condition as refinished.

Box, Paperwork & Accessories: This pistol comes with a single 8-round magazine marked “jvd” on the left, “P38 / U” on the right, and the floorplate has “1523” over two previously-struck numbers. The magazine has minor wear, infrequent minor surface oxidation, intact feed lips and a strong spring.

Our Assessment: The P38 occupies a significant place in history. It was the first locked breech pistol to have a single action/double action trigger. After the start of WWII, Walther could not keep up with the production required, and production was ordered to commence at both Mauser and Spreewerke in 1940. By the end of the war, Walther had only produced about 580,000 of the 1.2 million produced. After the war, Walther’s a-Mehlis facility found itself behind the Iron Curtain in East Germany. Many P.38 pistols were used to equip the various East German forces which were established or allowed by the Soviet Union, which also required a retrofit program. Pistols were refurbished, worn or damaged parts replaced, and many barrels were provided from the other P.38 factory behind the curtain, Spreewerke. This pistol’s markings identify it as one such pistol, with an East German acceptance mark on the frame and force-matched barrel with Spreewerke’s “cyq” code. The pistol is in Fine condition as refinished, retaining nearly all of its new finish with a great bore and strong mechanics. For the P.38 or Cold War collectors, this is an interesting piece, but it should also prove to be a good shooter. Please see our photos and good luck!