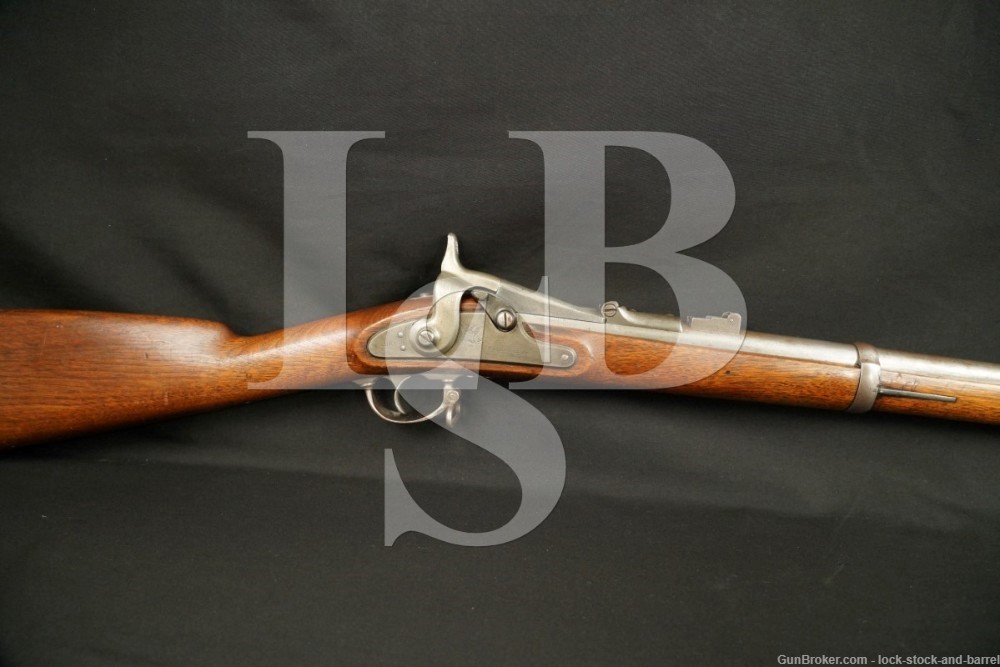 Year of Manufacture: The original date of manufacture for the rifle was 1864. It was converted to cartridge use in 1866.

Sights / Optics: The front sight is a blade fixed to a small rectangular base. The rear sight is a folding leaf sight. When the leaf is folded down, a short “V” notch battle sight is presented. When flipped up, there are two larger aperture sights and a small “U” notch at the top of the leaf.

Stock Configuration and Condition: The wood stock has a straight grip, metal nosecap, cutout for the included cleaning rod, 3 barrel bands, stacking loop, 2 sling loops, and a metal buttplate. The buttplate shows scratches and light surface erosion. The stock hardware shows small scratches and discoloration from oxidation. The wood shows several scrapes, scratches and compression marks. Many have damaged small portions of the surface wood. Most of these marks have been oiled. The LOP measures 13 1/2 inches from the front of the trigger to the back of the buttplate. Overall, the stock rates in about Very Good Plus condition, as an antique.

Type of Finish: The barrel and receiver are in-the-white. The breechblock, lockplate and hammer are case colored.

Bore Condition: The bore is gray and the rifling is deep. There is light erosion throughout the bore with a scattering of more prominent erosion.

Overall Condition: This rifle has lost most of its metal finish. The metal shows scrapes, small scratches, small dents, discoloration from oxidation and small areas of light surface erosion. The screw heads show moderate use. The markings are well defined. Overall, this rifle rates about in Very Good condition, as an Antique

Mechanics: The action functions correctly. The hammer has a half-cock safety. We have not fired this rifle. As with all used firearms, thorough cleaning may be necessary to meet your maintenance standards.