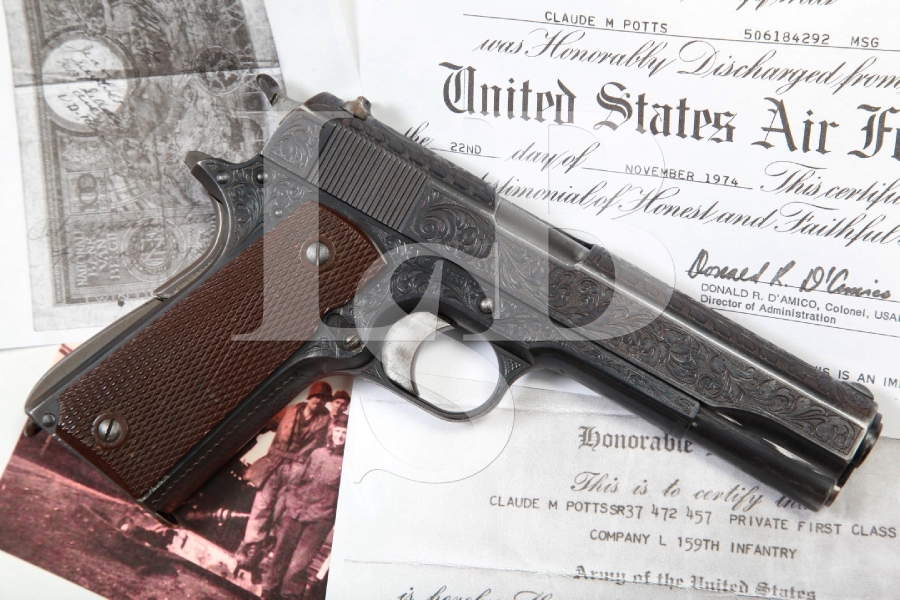 Sights / Optics: The pistol is mounted with a “U” notched rear sight dovetail set to the slide and a short rounded front sight blade fixed to the slide.

Stock Configuration & Condition: The grips are checkered reddish brown plastic. The checkering is sharp with a few tiny spots of light wear in the right grip and light wear down the center of the left grip. The grips rate in about Excellent condition.

Type of Finish: This pistol has a blued finish and is elaborately scroll engraved on the slide and sides of the frame, while the front strap and trigger guard are checkered.

Overall Condition: This pistol retains about 94% of its current metal finish. There is thinning on the grip safety, slide release, safety and front edge of the slide with spots of surface loss on the front underside of the slide from rubbing on the frame. There are light marks around the ejection port in the top of the slide and on the right side of the frame above the front of the trigger guard. There is a spot of thinning in the front strap, scratches through the finish on the right side of the frame behind the trigger and wear through the finish on the bottom edge of the frame below the slide release. The hammer checkering shows moderate wear. The checkering and serrations on the magazine release, slide release, slide and safety are sharp. The grip screws are sharp but with marks of a screwdriver. The markings are clear. Overall, this pistol rates in about Fine condition as refinished.

Box, Paperwork & Accessories: This pistol comes with one blued 7-round magazine. It is unmarked and shows surface loss at the upper lips and light surface wear in the body. We would rate the magazine Excellent except that it will not drop free of the pistol – the lips are slightly flared and bind on the insides of the magazine well. The magazine drops about ¼” out of the gun, and then can be easily be pulled free the rest of the way. We tried several two tone WWII magazines and they all dropped free of this pistol. We rate the magazine in Good condition. Along with the pistol is a letter from the original owner’s son indicating that his father, Pfc. Claude M. Potts, carried this pistol during WWII when he served as a telephone and telegraph linesman. Along with the letter are copies of his father’s papers including his Honorable Discharge from the Army in 1945, his Honorable Discharge from the Air Force in 1974, his Enlisted Record showing he entered service in February 1943, pictures of him in Germany, photocopies of his dog tags and copies of German, French and Italian money signed by various soldiers. All are in Excellent condition.

Our Assessment: This is a U.S. Government issue Colt 1911 pistol made in 1917 during WWI, with a WWII manufactured slide and a commercial barrel. It has been elaborately scroll engraved on the slide and sides of the fame, and the trigger guard and front strap have been checkered. The pistol was refinished in blue, and has about 94% of its new finish remaining. It shows thinning on the front of the slide and the grip safety, with a few handling marks on both sides of the frame. The grips are checkered plastic in Excellent condition and the bore is bright with sharp rifling. Along with the pistol is a letter from the owner’s son stating that his father carried this pistol while serving in the Army during WWII. There are also copies of his father’s enlisted record, as well as his honorable discharge papers from both the Army in 1945 and the Air Force in 1974. The 1911 and 1911-A1 pistols served the military of the United States from 1911 to 1985, through both World Wars, the Korean and Vietnam wars. They gained a reputation as a reliable handgun with plenty of stopping power and are held in high regard by those who have used them. This receiver on this pistol is old enough to have seen use in WWI, while the slide is from the WWII period. This may not have the collector value of a U.S. Army issued pistol with original finish and Bringback paperwork, but it is beautifully engraved and has letters of providence from the owner’s son. It should still see collector interest as a WWII firearm. It’s hard to imagine a shooter outbidding the collectors on this one, but the pistol has a bright bore with sharp rifling and the slide is tight to the frame, so someone who really likes to shoot beautiful pistols may get their chance.