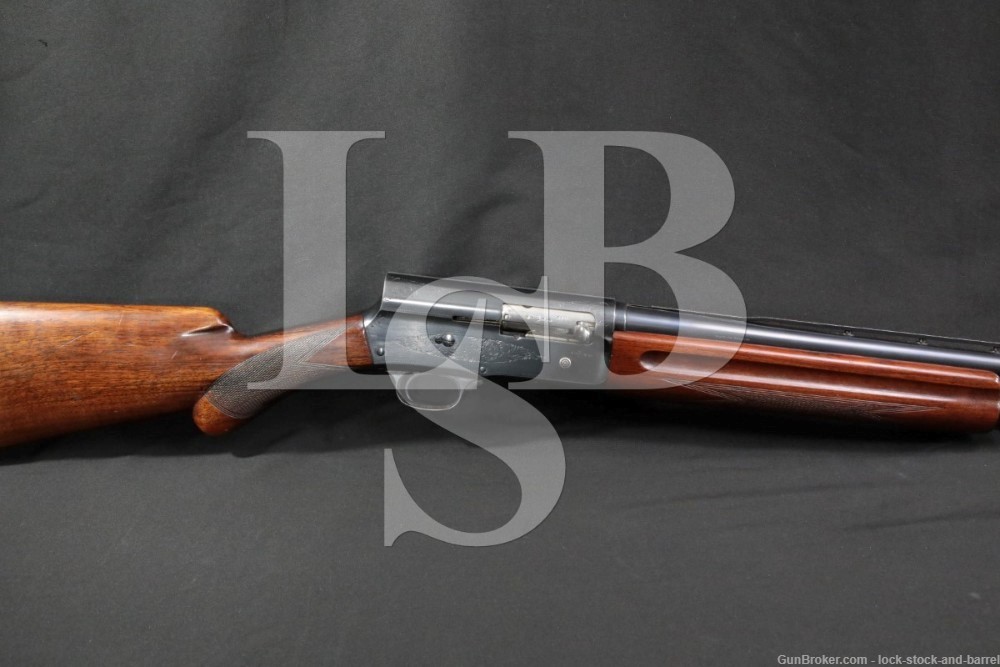 Choke: A Weaver Choke compensator has been mounted on the barrel with an Improved Modified (3/4) choke installed.

Sights / Optics: There is a brass bead at the front of the rib. The top of the rib and receiver are checkered for glare reduction. The original strip of matting on the top of the barrel can still be seen under the rib.

Stock Configuration & Condition: The stocks are a two-piece checkered walnut set with a round-bottom pistol grip, finger grooves running the length of the forend, straight comb and a ventilated brown rubber Pachmayr recoil pad. The stocks have some scattered light nicks, scuffs and scratches. There are a few more notable nicks on the left of the forend at the rear of the checkering, the bottom-front of the grip, and in the belly and a more notable vertical scratch in the left of the buttstock. The checkering is generally well defined. There are no chips or cracks. The LOP measures approximately 14″ from the front of the trigger to the back of the recoil pad, 13″ to the back of the wood, indicating that the stock was likely cut when the pad was installed. The pad has minor wear and is still fairly supple. Overall, the stocks are in Very Good condition.

Overall Condition: This shotgun retains about 96% of its current metal finish. The finish is thinning at most edges. The action shows light operational wear. There are a few scattered minor nicks, scuffs and scratches including minor tool marks in the magazine cap serrations. There are infrequent spots of very minor surface oxidation and faint surface erosion under the finish. The screw heads range from sharp to lightly tool marked with strong slots. The markings are generally clear, there are some places where the engraving is shallow or incomplete. Overall, this shotgun is in about Fine condition as refinished.

Mechanics: The action functions correctly. There is a magazine cutoff on the left front of the receiver, a safety at the front of the trigger guard and a bolt release on the right side of the receiver. We have not fired this shotgun. As with all used firearms, a thorough cleaning may be necessary to meet your maintenance standards.

Browning would eventually license the design to FN in Europe and later to Remington for their Model 11 and to Savage Arms for their Models 720 and 755. These designs went on to be a great commercial success, the first truly successful autoloading shotgun. This Auto-5 was built by FN in 1950 with Grade I engraving on the receiver and tangs. It is a desirable “Sweet Sixteen” model, made in the X-prefix serial range and just a couple of years after the Sweet Sixteen moniker was actually engraved on the receivers. The gun has had an after-market ventilated rib installed as well as a Weaver Choke, making for a versatile hunting gun. That said, this vintage Sweet Sixteen may also attract the collectors. Please see our photos and good luck!