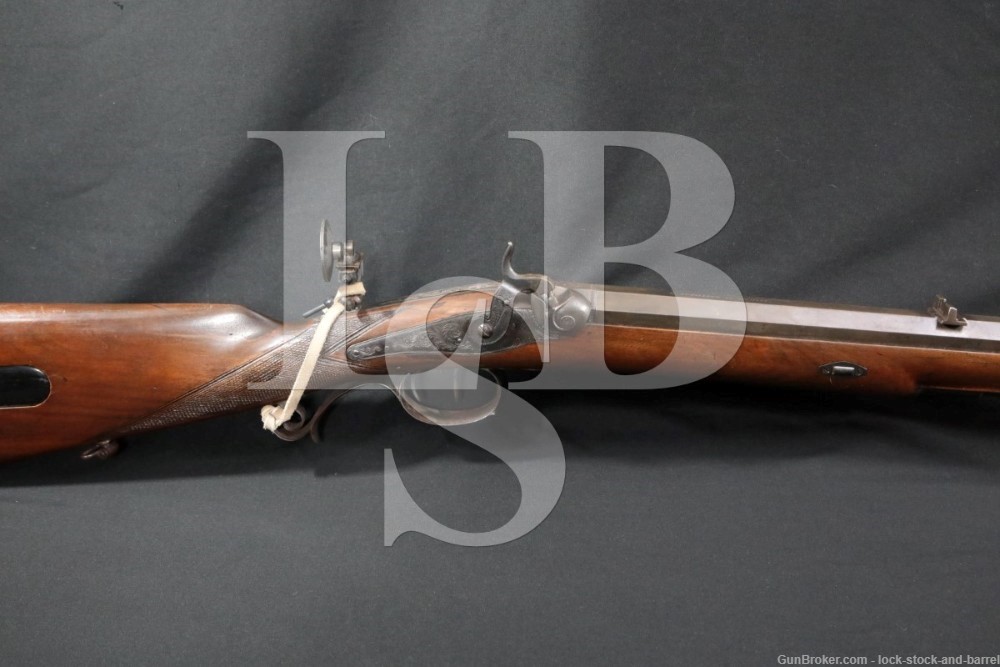 Markings: The top of the barrel is marked “G. SCHILLING IN MEHLIS”.  The barrel’s chamber and majority of other metal parts have floral scroll engravings.
Barrel Length: 32”, Octagonal

Sights/ Optics: The front sight is a small dot situated between two protective ears dovetailed by the muzzle. The rear sight is a screw-set square notch dovetailed to the barrel. There is a diopter with a small aperture fixed to the top tang.

Stock Configuration & Condition/ Grip: The refinished stock is one-piece wood featuring a painted on black forend cap, three forend wedges (the middle wedge has been replaced with a screw), two ferrules, a metal cap for the slot in the forend for the included ramrod, a lock-plate, a checkered straight wrist, a straight comb with cheek-piece, a wood patchbox that which has a blakc painted cover and a black painted wood butt-plate. There is a sling swivel fixed to the belly. The stock has scattered light handling marks, nicks and scuffs. Notably, there is a patch repair at the heel and a patch repair at the comb. Also, there are a few scattered patch repairs with wood filler. The LOP is 13.75” and 12.75” from the triggers to the rear end of the butt-plate. The butt-plate has a crack that originates at the bottom of the top screw and extends down to the other screw and has a small crack under the bottom screw; both cracks have been filled. The paint is also faded on the butt-plate. Overall, the stock is in Very Good condition for a refinished Antique.

Bore Condition: The bore is semi-bright with sharp rifling. There is erosion concentrated in the grooves and some stubborn fouling.

Overall Condition: The rifle retains about 80% of its metal finish. There are scattered light handling marks, nicks and scuffs. Notably, there are a few small scattered patches of pitting visible under the new finish and spots of erosion on the diopter. The markings remain clear. The screwheads have light tool-marks but they remain serviceable. Overall, the rifle is in Very Good condition for a Refinished Antique.

Our Assessment: This is a G. Schilling in Mehlis made Jaeger Rifle which was manufactured in the mid-late 19th century. Jaeger Rifles were a specific style of hunting rifle manufactured primarily in what is now Germany. They were considered among the best hunting rifles of the time period. The earliest examples used the flint-lock system, but many of these original rifles would eventually be converted to the percussion ignition system and the production of Jaeger Rifles extended into the percussion age. The Jaeger Rifle eventually arrived in the United States as German immigration exploded in the early 19th century, and many of the scroll engraving techniques that ended up revolutionizing how firearms are decorated originated with German immigrants. The jager rifle is easily distinguished by a double-set trigger, patchbox and impressive scroll engraving. These features would eventually be incorporated into later production Kentucky Rifles (North American manufactured hunting rifles which had been in use since the 18th century). While refinished, this example remains aesthetically impressive with its beautiful scroll engraving and the gun is mechanically sound. This is a great collector’s item for fans of historical firearms and muzzleloaders. Good luck on your bid!