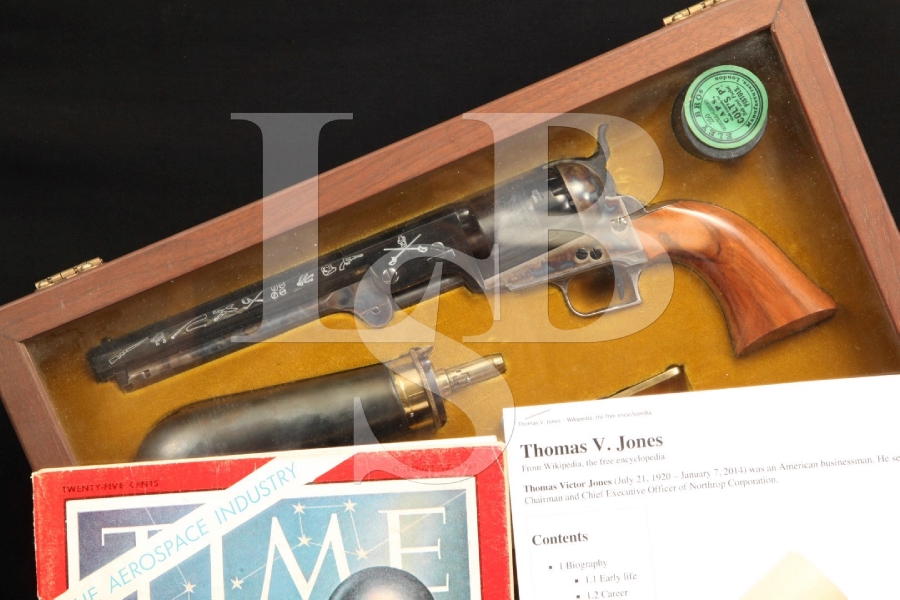 Sights / Optics: The front sight is a brass bead fixed to the barrel. The rear sight is a notch in the hammer, visible when cocked.

Stock Configuration & Condition: The one piece grip is smooth walnut. The grip shows only slight evidence of use. There is a small mark in the finish on the left panel’s front edge and one on the side, near the butt. On the bottom edge of the right panel, a small spot of finish thinning and a small compression mark are visible. The grip rates in about Excellent overall condition.

Bore Condition: We did not break down the revolver to look in the bore.

Overall Condition: This handgun retains about 90% of its metal finish. The barrel shows very light handling marks, including some small compression marks near the wedge on the right side of the barrel assembly and light tool marks near the loading lever pivot screw head. Between ‘del’ and ‘cielo’ a small spot of pinprick erosion and a mark in the finish are visible and two very light marks are present between ‘cielo’ and ‘sept’. There are light marks and scattered spots of pinprick erosion on the right side of the frame. The silver plated trigger guard and back strap show marks in the finish and the development of a natural patina and some finish thinning from contact with velvet material in which the gun rests. The cylinder is marked “20786” and has the roll stamped engraving of the Ormbsy Texas Navy vs Mexico naval battle scene. There is a very light drag line and very light handling marks on the cylinder. The screw heads are sharp. The markings are clear. Overall, this handgun rates in about Fine condition.

Box, Paperwork & Accessories: The pistol comes in a wooden display case with a glass lid. There are a brass colored latch and knob on the front and two brass colored hinges on the back. The case exhibits very light evidence of handling. The bottom of the box is form fit and lined with a green-gold velvet which exhibits compression marks from contact with the enclosed items. The case is in Excellent condition. A brass plaque which reads “Special Edition / Conquistadores del Cielo / 1976” is attached to the floor of the box. The plaque is developing a natural patina, shows some marks in the finish and is in Fine condition. Along with the revolver, the case contains an empty round percussion cap tin, a powder horn, a nipple wrench/screwdriver and ball mold, a commemorative newspaper and an issue of “Time” magazine. The cap tin has a green Eley Bros label which has released from the tin which is in good condition. The powder horn is stamped “MADE IN ENGLAND” and is calibrated in drams. The brass cap and spout are developing an age appropriate patina and the reservoir exhibits only slight handling marks. The powder horn is in Fine condition. The two cavity bullet mold will cast one conical bullet and one round ball. It is developing an age appropriate patina and is in Fine condition. The nipple wrench exhibits light handing marks and is in Excellent condition. The commemorative newspaper is Vol. 1, Issue 1 of the “Conquistador Chronicle” which reprises the events of the retreat for which the revolver was issued to honor. The newspaper is rolled and bound with a leather strap; it has appropriately yellowed with age and is in Excellent condition. In addition, the October 27, 1961 edition of “Time” magazine is included, on which Thomas Jones is the cover story. The magazine is in Very Good condition.

Our Assessment: This is a modern production, Colt C1851 Navy presentation revolver, one of only 174 made to commemorate the 39th Fiesta of Los Conquistadores del Cielo celebrated between September 7th, 1976 and September 11th, 1976. The Conquistadores del Cielo, or “Conquers of the Sky” is an informal club made up of some of the biggest players in aviation. Each year since 1938, the Conquistadores gather at the A Bar A Ranch near Jackson, WY to hunt, fish, shoot, play golf and socialize. The 39th ‘Fiesta’ was held during the US Bicentennial celebration, so Corporate Vice President for Colt Industries Guy Shafer ordered the specially made revolvers for each attendee. This one was sent to Thomas V. Jones, then CEO of Northrop. Jones was born in 1920 and began his career in the Aircraft Industry in 1942 when he went to work for the Douglas Aircraft Company. Joined Northrop in 1953, as the Assistant to the Chief Engineer, he rose to be the President in 1959, CEO in 1960 and finally Chairman of the Board of Northrop in 1963. He was featured on the cover of “Time” magazine’s October 27, 1961 edition and inducted to the National Aviation Hall of Fame in 1992. Jones passed away in January of 2014. This is a unique opportunity to acquire an authentic Colt C1851 commemorative revolver, in fine condition which is 1 of 174, honoring an innovator and important member of aviation history.