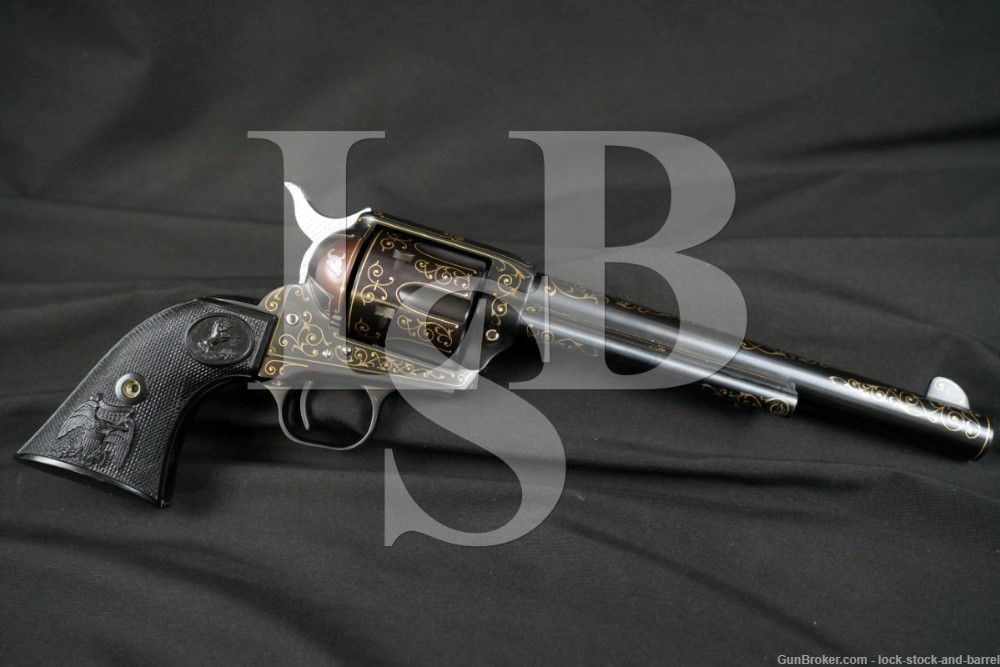 Markings: The left side of the barrel is marked “COLT SINGLE ACTION ARMY .45”. The top of the barrel is marked “COLT’S PT. F. A. MFG. Co. HARTFORD CT. U.S.A.”. The left side of the frame is marked “PAT. SEPT. 19, 1871 / JULY 2,72 JAN. 19,75” and with the “Rampant Colt” logo. The underside of the frame at the grip frame is marked with the serial number, “SA16102”. The left side of the grip frame is marked twice with the serial number, “SA16102”. The left front of the trigger guard is marked with a “VP” in a triangle and at the rear with a “K”. The front of the cylinder is serial-matching, marked “6102”. The interior of each grip panel is marked with “COLT’S HTFD. CONN.”, and with the serial number, hand-scribed “16102”. The exposed markings are in gold, with the rampant colt done in molded gold. The left recoil shield has a molded gold cowboy riding a bucking bronco and the loading gate has a silver cow skull. The barrel, ejector housing, frame, cylinder and grip frame have scroll and border engraving inlaid with gold and there are gold accents on the screw and pin heads.

Stock Configuration and Condition: The grips are two-piece checkered hard rubber panels, each with the Rampant Colt at the top and an ‘E Pluribus Unum’ eagle at the bottom. The grips have no notable wear or damage, only light handling marks. The checkering is sharp and there is good detail in the colts and eagles. There are no chips or cracks. Overall, the grips rate in Excellent condition.

Type of Finish: Blue and Gold

Overall Condition: This handgun retains about 99% of its current metal finish. There is no notable wear or damage, only light handling marks. The screw heads are sharp. The markings are clear. Overall, this handgun rates in Excellent condition as engraved and refinished.

Mechanics: The action functions correctly. The cylinder locks up with light play on each chamber. The trigger is crisp. We did not fire this revolver. As with all used firearms, a thorough cleaning may be necessary to meet your maintenance requirements.

Our Assessment: In 1974, Colt quietly discontinued production of the single Action Army, the second time they had done so. Luckily, the loyal fans of the SAA would not need to wait long as Colt would bring back the SAA in 1976, a “3rd Generation”. Changes were made but the basic SAA was the same (e.g., standard barrel lengths of 4 3/4”, 5 1/2” and 7 1/2”, finishes of full nickel or blue, with case color frames, grips of hard rubber, etc.). Grips on nickel guns were walnut, with Colt’s Rampant Colt medallions inset at the top.

The changes were incorporated in an effort by Colt to keep prices down. One new change was a pressed-in cylinder pin bushing instead of the removable ones used in 1st and 2nd Generation cylinders. Also, the ratchet at the rear of the cylinders was re-shaped, which also necessitated a different shape on the rotating hand. And for some unknown reason, the pitch of the barrel threads was changed from the 20 threads per inch (TPI) as used on 1st and 2nd Generation SAAs to 24 TPI for the new ones. Toward the end of 2nd Generation production Colt had begun using some investment cast parts, but the frames continued to be forged. The introductory caliber for 3rd Generation SAAs was .45 Colt, but .357 Magnum came along by the end of 1976.

Everyone should have a Colt Single Action Army, and this would be a beauty to add to any collection. As was the case with the 1st and 2nd Generation SAA revolvers, the 3rd generation was a favorite canvas for engravers to practice their art. This example has had scroll engraving inlaid with gold as well as some molded gold scenes placed on the loading gate and recoil shield. Even the rampant colt logo on the frame has been done in molded gold. The result is a stunning revolver that is sure to catch eyes when on display or at the range. This is going to be popular with collectors as well as those who appreciate fine engraving, and would make a fine revolver to pass down through the generations. Good luck and happy bidding!