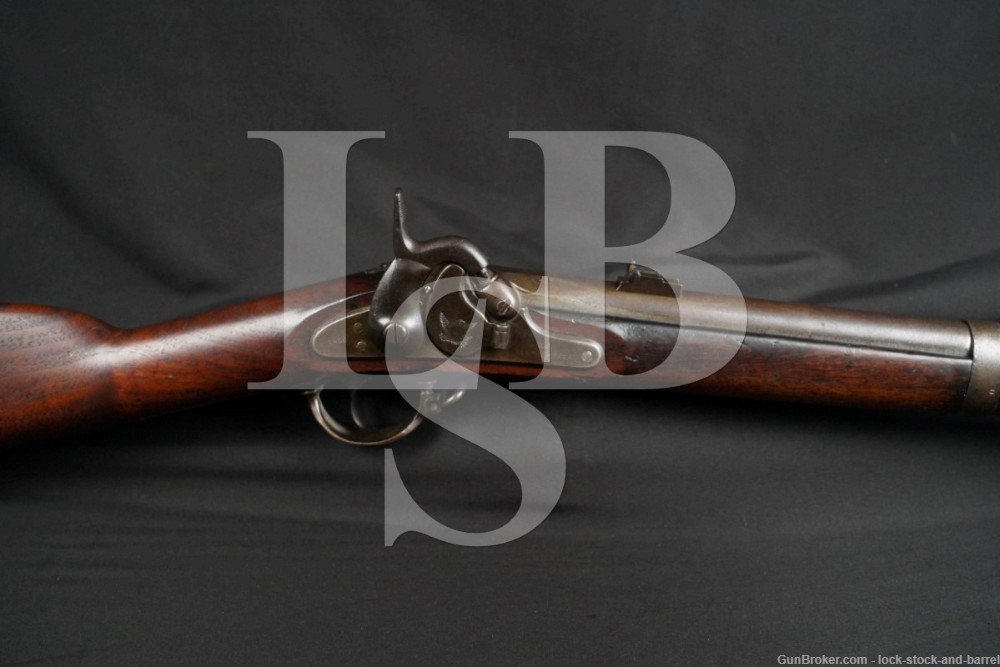 Sights/ Optics: The front sight is a blade fixed by the muzzle. The rear sight features a folding set of “V”-notches with the smallest marked “1”, the smallest notch can be flipped to use a higher “V”-notch. There is an additional notch which is higher than the other which can be flipped up when the higher of the two aforementioned ones is raised, the highest notch is marked “5” and “K”. There are a total of three notches in total.

Stock Configuration & Condition/ Grip: The stock is one-piece wood featuring a forend cap, a slot in the forend for the included ramrod, a total of two barrel bands secured by springs, a lock-plate, a straight wrist, a straight comb, a patchbox on the right side of the butt and a semi-crescent butt-plate. There is a sling swivel fixed to the front of the trigger guard and one fixed to the bottom of the front barrel band (no sling is included). The stock has scattered light-moderate handling marks, nicks, compressions and scuffs. Notably, there are scattered compressions and nicks on the forend, concentrated on the left side between the barrel bands, and a pin on the left side of the forend just ahead of the rear barrel band. Also, there’s a small chip at the bottom of the forend, just behind the rear barrel band, where the ramrod is seated. Finally, there is some moderate wear around the top tang including a small light crack that extends into the wrist,  The LOP is approximately 13.5” from the trigger to the rear end of the butt-plate. The butt-plate has some light handling marks and is coated in light surface oxidation. Overall, the stock is in Good condition for an Antique.

Overall Condition: The musket has no metal finish. The metal parts of the gun are coated in light-moderate surface oxidation and have taken a patina color. There are scattered light-moderate handling marks, nicks and scuffs. Notably, there is a small patch of pitting on the left side of the barrel just above the forend cap. The markings remain clear. The screwheads have tool-marks, but they remain serviceable. Overall, the musket is in Very Good condition for an Antique.

Mechanics:  The action functions correctly. We did not fire this musket. As with all used firearms, a thorough cleaning may be necessary to meet your maintenance requirements.

Our Assessment: This is a Harpers Ferry manufactured Model 1855 Percussion Rifle-Musket.

The Model 1855 musket used a percussion ignition system that was designed by Edward Maynard. Maynard was an interesting man, he started his adult life by entering the US Military Academy at West Point but due to poor health had to resign after a single semester. He went on to pursue a career in dentistry. Maynard became one of the most successful dentists of his day, but he also moonlighted as a weapons designer, patenting dozens of firearms related patents. This musket uses the Maynard Tape Primer percussion ignition system. While theoretically a sound design, the Maynard Tape Primer System proved unreliable with its paper strips susceptible to moisture. Fortunately, the Model 1855s were able to operate normally with standard percussion caps and worked well enough in the field, in spite of the Maynard system. The Confederates captured the Model 1855’s schematic from Harpers Ferry at the outset of the Civil War and began to manufacture the weapon in Richmond Virginia, but the Confederate made examples lacked the faulty Maynard Tape Primer System. Another notable aspect of the Model 1855, it was the first regulation US martial arm designed with a .58 caliber bore in order to accommodate the Minie bullet. When the Civil War broke out the Model 1855 would be pressed into service. Although the Springfield Model 1861 was introduced before the Civil War broke out, only a small number were initially available and the Model 1855 would be pressed into service until the end of the conflict.

This gun largely conforms to the specifications of a Model 1855, Type II, but there are two issues. First the Model 1855s were manufactured with rifled bores but this specimen has no rifling. The other issue is that the gun lacks a bayonet lug which was typically fixed to the right side of the barrel just behind the muzzle, and was designed to accommodate a saber bayonet. Otherwise, the gun’s markings and components are consistent with the Model 1855. This gun is well preserved with clear markings and an intact stock. It should make a nice addition to a historical firearms collection. Good luck on your bid!