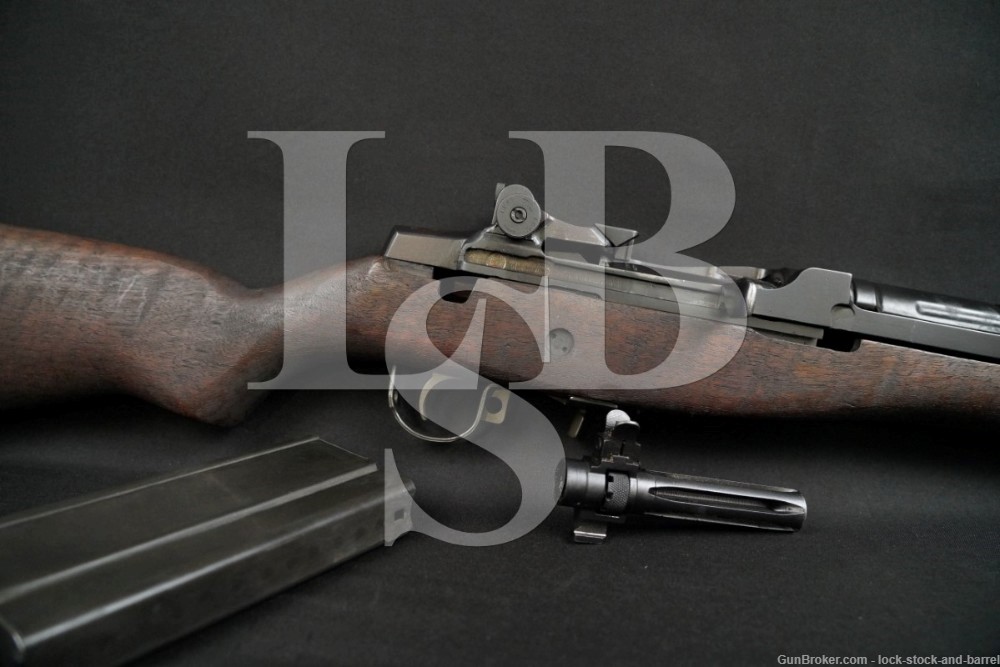 Model: M1A Conversion. This is a converted M1 Garand.

Sights / Optics: The front sight/flash suppressor assembly has been removed. It can be replaced with a muzzle brake assembly in California. It can be attached to the rifle where legal. The flash suppressor assembly is included in the auction.
The rear sight is a fully adjustable aperture sight set between two protective wings. The windage knob is marked “LEFT arrow” twice and “WRIGHT”. The elevation knob is marked from “2-12” in increments of two and “WCE”.

Stock Configuration & Condition: The stock is a surplus M14 stock. The cutout at the right rear of the receiver is for a selector lever. The hardwood stock has a pistol grip, metal nose caps, fiberglass handguard, two sling loops and a metal buttplate with hinged door for storage in the butt covered by a flip up metal buttplate. The buttplate shows scrapes & discoloration. The handguard shows several scrapes & scratches which have removed areas of the paint finish. The wood shows several scuffs, scrapes and small scratches. The LOP measures 13 1/4 inches from the front of the trigger to the back of the buttplate. The stock rates in about Very Good Plus overall condition as refinished.

Bore Condition: The grooves are semi bright. The rifling is deep. There is no erosion. The bore shows an M.E. of 1.

Overall Condition: This rifle retains about 95% of its metal finish as refinished. The bottom and interior of the receiver have surface erosion and pitting showing through the new finish. The barrel and gas tube assembly show scrapes & scratches. The receiver and bolt show operational wear. Most of the markings are deep. Overall, this rifle rates in about Very Good Plus condition as refinished.

Box, Paperwork & Accessories: The rifle comes with its original front sight assembly and a magazine. The 20 round magazine shows scrapes, discoloration and thin scratches. It is in Very Good Plus condition.
The 20 round magazine is not available to residents of California or any state with magazine capacity restrictions.
Please see photos as to the condition of the listed items.

Our Assessment: This rifle started life as a Springfield M1 Garand back in 1943. It is now in M1A configuration and resembles a Semi Auto M14. This rifle was built using surplus M14 parts and M1 Garand parts.
The receiver used is RE-WELDED. The serial number on the rear does not match the drawing number on the leg. The receiver has also been cut to an M1A profile. This is a good looking M1A conversion with a strong bright bore. It should do well at the range.