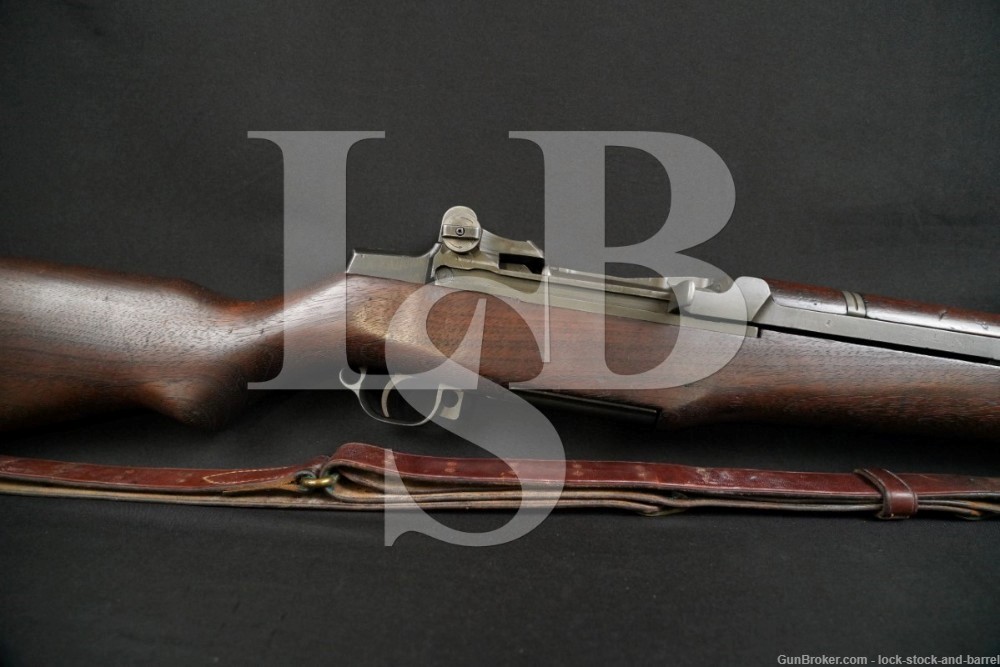 Model: M1 Garand.
This rifle is marked with a British export mark. It served for an Allied country during or after WWII.

Markings: There is no import mark. The British export mark on top of the barrel reads “30/06 2.49 18 TONS”. It is stamped next to a Nitro Proof from the London Proof House “arm holding a sword / NP”.

Stock Configuration & Condition: The face of the grip is marked with a “circled P”. The right side of the butt is marked “R / 53”.
The hardwood stock has a pistol grip, metal nose caps, stacking loop, two sling loops and a metal buttplate with hinged door for storage in the butt. The buttplate shows scratches, surface erosion and a brown patina. The wood shows numerous scrapes, scratches and compression  marks. The LOP measures 13 1/4 inches from the front of the trigger to the back of the buttplate. The stock rates in about Very Good overall condition.

Bore Condition: The bore is gray. The rifling is deep; less pronounced at the muzzle. The bore shows an M.E. of 4. The throat shows a T.E. of 4.

Box, Paperwork & Accessories: The rifle comes with a sling and a leather sling is marked “BOYT in an oval”.

This M1 Garand was made Winchester back in January of 1942. Its action uses all Winchester parts. After its service life it was exported from Britain back into the U.S. for sales to the civilian market. The barrel is stamped with the British Export mark and a large proof from the London Proof House.
The export marks are commercial marks. They are not British Military marks. This rifle served during WWII but we do not know its service history. WWII M1 Garands that were stored in or transferred through England were marked with commercial proofs prior to export. This includes M1 Garands that served for other Allied countries during and after WWII. This Winchester M1 Garand will add nicely to your WWII collection. Good luck.